The borough was made up of three main districts: Shoreditch, Hoxton and Haggerston. An individual coat of arms was never granted to the metropolitan borough council; they adopted the arms of the second lord of the manor of Shoreditch, John de Northampton.

The borough comprised the area of the ancient parish of Shoreditch (St Leonard's) plus part of the ancient liberty of Norton Folgate to the south [1] The parish vestry had taken on local administration from the 17th century onwards.

The civic buildings of the borough included the Town Hall (originally the Vestry Hall) in Old Street with the Magistrates Court (derelict in 2007), the Coroner's Court in Boundary St and other civic offices nearby.

The original Vestry Hall of 1866 was described at the time as the 'grandest in London' and was designed by Caesar Augustus Long, a local architect about whom little is known. On the abolition of the London Vestries it became the town hall and was extended and enlarged in 1902 and 1938. The building is embellished with symbolic statuary alluding to the borough motto: "More Light, More Power". As the 1902 extensions were being completed the building caught fire and substantial rebuilding was needed. Surplus to requirements following the abolition of Shoreditch Borough in 1965 it fell into increasing disuse and was leased to a charitable Trust in 1998 who carried out a £3.5m restoration and now run it as a self-sustaining community business.

The borough motto commemorates the provision of electric power to the borough from the Vestry of St Leonard Shoreditch Electric Light Station[2] later known as the Shoreditch Borough Refuse Destructor and Generating Station[3] on Coronet Street. This building is embellished with the motto E PULVERE LUX ET VIS (Out of the dust, light and power). It was built in 1896 and burned rubbish, to provide steam for the electricity generator. The waste heat was used to heat the public baths next door (and now demolished). The building is now home to the National Centre for Circus Arts.

The metropolitan borough was conterminous with the Vestry authority, when it was formed in 1900. Statistics compiled by the London County Council, in 1901 show the population growth in London, over the preceding century. 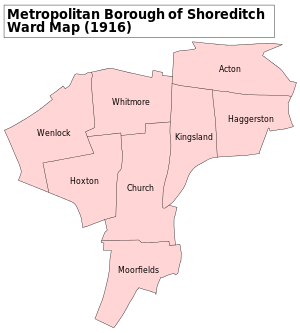 A map showing the wards of Shoreditch Metropolitan Borough as they appeared in 1916.

In 1918 the borough's representation was reduced to one seat:

In 1950 the borough's representation was reduced to half a seat, when it was merged with Finsbury: