The borough was formed from four civil parishes: St Mary Newington, Southwark Christchurch, Southwark St George the Martyr and Southwark St Saviour. In 1930 these four were combined into a single civil parish called Southwark, which was conterminous with the metropolitan borough.[2]

Previous to the borough's formation it had been administered by three separate local bodies: St Saviours District Board of Works, Newington Vestry and Southwark St George the Martyr Vestry.

The borough was one of two created in the Southwark area by the London Government Act 1899. The remaining, eastern, part of Southwark (the parishes of St John Horsleydown and St Olave & St Thomas) was combined with Bermondsey and Rotherhithe.[3]

The existing boundaries were found to be "very unsatisfactory". Accordingly they were realigned, for the most part following the centre of roads. Guy's Hospital, which had been divided between three parishes, was entirely taken into the borough.[4]

The legislation did not name the two boroughs. Instead this responsibility was given to the commissioners who were appointed under the act to simplify the boundaries between the new municipalities. Representatives for the various vestries gave their suggestions: St Saviour's District Board suggested "Southwark" for the western borough, denying that the eastern borough had a "co-equal" claim to the name. Representatives of the Collegiate Church of St Saviour supported the district board. It was pointed out that a new diocese was soon to be established with the collegiate church becoming the cathedral. This, it was reasoned, would make the new borough the "City of Southwark".[5]

Newington Vestry believed that the borough should bear their name as they were the "predominant partner" in the merger in terms of population, acreage, rateable value and municipal property, and that the council was likely to be based in their district. The name "Walworth" was also proposed as the area had Roman associations and also appeared in early written histories.[5]

The commissioners originally suggested that "West Southwark" might be acceptable, with the neighbouring borough bearing the name "East Southwark". The vestry of St John Horsleydown proposed naming the boroughs as "Southwark St Saviour's" and "Southwark St Olave's", a suggestion supported by the London County Council.[5] A decision was finally made on 25 January 1900, with the western borough becoming "Southwark" and the eastern borough as Bermondsey.[6]

In 1955 the borough council unsuccessfully petitioned for the grant of city status.[7]

It included the areas now known as:

The London Government Act 1963 abolished both the County of London and the metropolitan boroughs. In their place were created Greater London, which was divided into 32 London Boroughs, formed by the merger of existing authorities. On 1 April 1965 the London Borough of Southwark was formed by the amalgamation of the three metropolitan boroughs of Southwark, Camberwell and Bermondsey.[3] 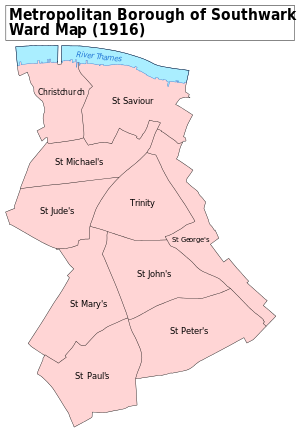 A map showing the wards of Southwark Metropolitan Borough as they appeared in 1916.

In 1918 the boundaries of the borough's three seats were adjusted and all three were renamed:

In 1950 the borough's representation was reduced to one seat: