The Metropolitan Borough of Wandsworth was a Metropolitan borough under the London County Council, from 1900 to 1965.

The borough was formed from five civil parishes: Clapham, Putney, Streatham, Tooting Graveney and Wandsworth. In 1904 these five were combined into a single civil parish called Wandsworth Borough, which was conterminous with the metropolitan borough.[1] Before 1900 these parishes, and Battersea until 1888, had been administered by the Wandsworth District Board of Works.

The coat of arms were granted on 6 July 1901. The blue wavy division represents the Rivers Wandle and Thames. French Huguenot refugees arrived in the area in 1685, and the blue drops represent the tears of their struggle. The five stars represent the constituent former parishes. At the top is a long boat, with a dragon's head, commemorating 9th century Danish incursions along the river. The borough council's motto was We Serve.[2]

The borough covered 9,130 acres (36.9 km2), which made it the largest in the County of London. The population recorded in the Census was: 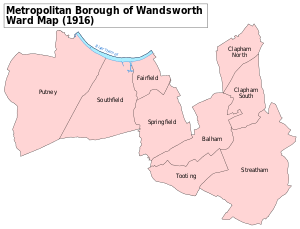 A map showing the wards of Wandsworth Metropolitan Borough as they appeared in 1916.

For elections to Parliament, the borough was divided into one and a half constituencies:

In 1918 the borough's representation was increased to five seats:

In 1950 the borough's representation was reduced to four seats: