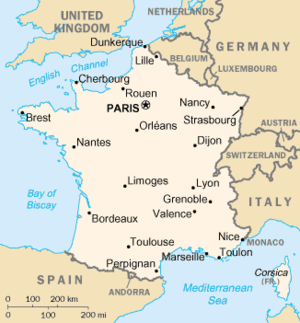 The five overseas regions—Martinique, Guadeloupe, Réunion, French Guiana, and Mayotte—have the same political status as metropolitan France's regions. Metropolitan France and these five overseas regions together are sometimes called la France entière ("the whole of France") by the French administration, especially by INSEE, although in reality this France entière does not include the French overseas collectivities and territories which have more autonomy than the overseas departments (read the Origin of the name section below). Until its independence in 1962, Algeria was a part of metropolitan France.[citation needed]

In overseas France, a person from metropolitan France is often called a métro, short for métropolitain.

The term "metropolitan France" dates from the country's colonial period (from the 16th through the 20th centuries), when France was referred to as la Métropole (literally "the Metropolis") as distinguished from its colonies and protectorates, known as les colonies or l'Empire. Similar terms existed to describe other European colonial powers (e.g., "metropolitan Britain", "España metropolitana"). This usage of the words "metropolis" and "metropolitan" itself came from Ancient Greek "metropolis" (from μήτηρ mētēr "mother" and πόλις pólis "city, town") which was the name for a city-state from which originated colonies across the Mediterranean (e.g., Marseille was a colony of the city-state of Phocaea, therefore Phocaea was the "metropolis" of Marseille). By extension "metropolis" and "metropolitan" came to mean "motherland", a nation or country as opposed to its colonies overseas.

Note that since INSEE now calculates statistics for la France entière, this practice has spread to international institutions so that, for instance, the French GDP published by the World Bank includes metropolitan France and the five overseas departments. The World Bank refers to this as "France" only, and not "the whole of France" as INSEE does. 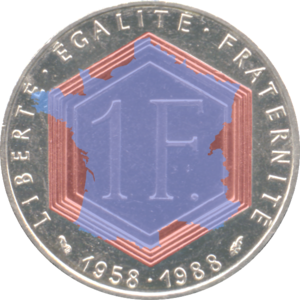 l'Hexagone illustrated by overlaying the outline of mainland France with the hexagon on the 1988 Charles de Gaulle commemorative 1 franc coin. The sides of the hexagon are: 1. the Channel coast, 2. the Atlantic coast, 3. the Pyrenees (border with Spain), 4. the Mediterranean coast, 5. the eastern border (Alps, Jura and Upper Rhine; Monaco to Karlsruhe), and 6. the northeastern border (German Rhineland and Belgium; Karlsruhe to Dunkirk).

Mainland France (French: la France continentale), or just "the mainland" (French: le continent), does not include the French islands in the Atlantic Ocean, English Channel or Mediterranean Sea, the largest of which is Corsica.

In Corsica, people from the mainland part of Metropolitan France are referred to as les continentaux.

A casual synonym for the mainland part of Metropolitan France is l'Hexagone ("the Hexagon"), for its approximate shape, and the adjective hexagonal may be a casual synonym of French (usually understood as metropolitan only, except in topics related to the foreign affairs and national politics of France as a whole).