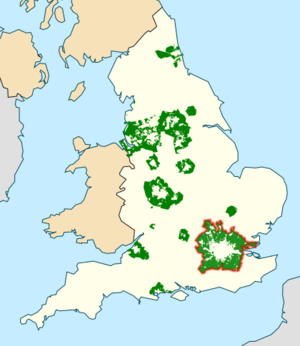 The Metropolitan Green Belt among other green belts of England.

The Metropolitan Green Belt is a statutory green belt around London, England. It includes designated parts of Greater London and the surrounding counties of Bedfordshire, Berkshire, Buckinghamshire, Essex, Hertfordshire, Kent and Surrey in the South East and East of England regions.[1]

The term emerged from continental Europe where buffer zones and broad boulevards were increasingly used to separate new development from the centre of historic towns; most notably the Ringstraße in Vienna. Various proposals were put forward from 1890 onwards but the first to garner widespread support was put forward by the London Society in its "Development Plan of Greater London" 1919. Alongside the CPRE they lobbied for a continuous belt (of up to two miles wide) to prevent urban sprawl, beyond which new development could occur.

Implementation of the notion dated from Herbert Morrison's 1934 leadership of the London County Council. It was first formally proposed by the Greater London Regional Planning Committee in 1935, "to provide a reserve supply of public open spaces and of recreational areas and to establish a green belt or girdle of open space". It was again included in an advisory Greater London Plan prepared by Patrick Abercrombie in 1944 (which sought a belt of up to six miles wide). However, it was some 14 years before the elected local authorities responsible for the area around London had all defined the area on scaled maps with some precision (encouraged by Duncan Sandys to designate a belt of some 7–10 miles wide).

New provisions for compensation in the Town and Country Planning Act 1947 allowed local authorities around the country to incorporate green belt proposals in their first development plans. The codification of Green Belt policy and its extension to areas other than London came with the historic Circular 42/55 inviting local planning authorities to consider the establishment of Green Belts. This decision was made in tandem with the 1946 New Towns Act, which sought to depopulate urban centres in the South East of England and accommodate people in new settlements elsewhere. Green belt could therefore be designated by local authorities without worry that it would come into conflict with pressure from population growth.

As the outward growth of London was seen to be firmly repressed, residents owning properties further from the built-up area also campaigned for this policy of urban restraint, partly to safeguard their own investments but often invoking an idealised scenic/rustic argument which laid the blame for most social ills upon urban influences. In mid-1971, for example, the government decided to extend the Metropolitan Green Belt northwards to include almost all of Hertfordshire. The Metropolitan Green Belt now covers parts of 68 different Districts or Boroughs.

Since 1955 London's green belt has extended significantly, stretching some 35 miles out in places. London's green belt now covers an area of 516,000 hectares, an area broadly three times larger than that of London itself. With London's population set to increase by 2,000,000 over the period 2015-2030 it is therefore under increasing pressure for limited land release. The London Society began debate about the city's green belt in 2014 with publication of a report entitled "Green Sprawl".[2][3][4][5][6] Other organisations, including the Planning Officers Society,[7] have since responded with specific calls for a review and proposals to balance land release with environmental protection.[8][9][10]

The table lists the areas designated as the Metropolitan Green Belt in 2014. Between 2009 and 2014 there was a reduction of 435 hectares. In 2009, 19 of the 32 London boroughs had green belt land, however by 2014 Greenwich was recorded with zero green belt land.[11] At least some part of every district in Surrey and Hertfordshire is included.