A metropolitan area, sometimes referred to as a metropolitan region, metro area or just metro, is a region consisting of a densely populated urban core and its less-populated surrounding territories, sharing: industry, infrastructure, and housing.[1] A metro area usually comprises multiple jurisdictions and municipalities: neighborhoods, townships, cities, exurbs, suburbs, counties, districts, states, and even nations like the eurodistricts. As social, economic and political institutions have changed, metropolitan areas have become key economic and political regions.[2] Metropolitan areas include one or more urban areas, as well as satellite cities, towns and intervening rural areas that are socio-economically tied to the urban core, typically measured by commuting patterns.[3]

For urban centres outside metropolitan areas, that generate a similar attraction at smaller scale for their region, the concept of the regiopolis and respectively regiopolitan area or regio was introduced by German professors in 2006.[4] 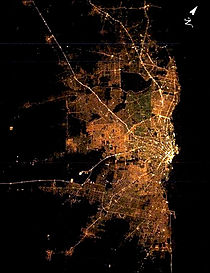 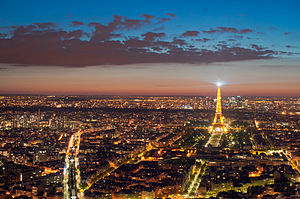 A metropolitan area combines an urban agglomeration (the contiguous, built-up area) with zones not necessarily urban in character, but closely bound to the center by employment or other commerce. These outlying zones are sometimes known as a commuter belt, and may extend well beyond the urban zone, to other political entities. For example, El Monte, California is considered part of the Los Angeles' metro area in the United States.

In practice, the parameters of metropolitan areas, in both official and unofficial usage, are not consistent. Sometimes they are little different from an urban area, and in other cases they cover broad regions that have little relation to a single urban settlement; comparative statistics for metropolitan area should take this into account. Population figures given for one metro area can vary by millions.

There has been no significant change in the basic concept of metropolitan areas since its adoption in 1950,[5] although significant changes in geographic distributions have occurred since then, and more are expected.[6] Because of the fluidity of the term "metropolitan statistical area," the term used colloquially is more often "metro service area," "metro area," or "MSA" taken to include not only a city, but also surrounding suburban, exurban and sometimes rural areas, all which it is presumed to influence.

A polycentric metropolitan area is one not connected by continuous development or conurbation, which requires urban contiguity. In defining a metropolitan area, it is sufficient that a city or cities form a nucleus that other areas have a high degree of integration with. 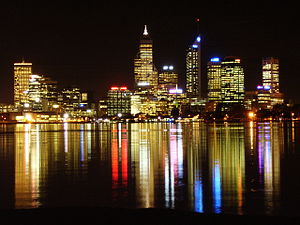 The Australian Bureau of Statistics defines 'statistical divisions' as areas under the unifying influence of one or more major towns or a major city.[7] Each of the state and territory capital cities as well as the national capital, Canberra, forms its own statistical division, and the population of the statistical division is the figure most often quoted for that city's population. However, this definition has largely become obsolete with the conurbation of several statistical divisions into a larger metropolitan areas. For example, the City of Brisbane, the capital city of Queensland, has long since become contiguous with the surrounding cities of Ipswich, Logan City, Redland City, Redcliffe, Pine Rivers, Caboolture and the Gold Coast. This conurbation is common to all the major metropolitan areas of Australia, which include all the capital cities and many major regional centres such as the Gold Coast, Newcastle, Wollongong, Geelong, Townsville, Cairns and Toowoomba.

Statistics Canada defines a census metropolitan area (CMA) as an area consisting of one or more adjacent municipalities situated around a major urban core. To form a CMA, the metropolitan area must have a population of at least 100,000, at least half within the urban core. To be included in the CMA, adjacent municipalities must have a high degree of integration with the core, as measured by commuter flows derived from census data.[8] As of the Canada 2011 Census, there were 33 CMAs in Canada, including six with a population over one million—Toronto, Montreal, Vancouver, Ottawa, Calgary and Edmonton.[9]

In Denmark the only metropolitan area is Greater Copenhagen,[10] consisting of the Capital Region of Denmark along with the neighboring regions Region Zealand and Skåne County (Sweden). Greater Copenhagen has an approximate population of 3.9 million people.[11][12] This area is the most densely populated area in the Nordic Region [13]

In Egypt, there is officially a region called Greater Cairo, which includes the capital and its province as well as surrounding cities. Alexandria's urban area is another metropolitan area, but not considered officially as such.

The European Union's statistical agency, Eurostat, has created a concept named Larger Urban Zone (LUZ). The LUZ represents an attempt at a harmonised definition of the metropolitan area, and the goal was to have an area from a significant share of the resident commute into the city, a concept known as the "functional urban region".[14]

In India, the Census Commission defines a metropolitan city as, "one having a population of over 1 million and above".[16] As of 2011[update] Census India stats, there are 46 metropolitan cities in India. The top ten metropolitan cities based on 2011 Census population are Mumbai, Delhi, Kolkata, Chennai, Pune, Hyderabad, Ahmedabad, Banglore, Surat and Jaipur.[17] Residents of these cities are also entitled to a higher house rent allowance.[18]

In Israel there are four metropolitan areas: Tel Aviv, Jerusalem, Haifa and Beersheba. Tel Aviv Metropolitan Area in late 2005 numbered about three million inhabitants. This is a center of metropolitan employment and business in Israel. Today, some argue that the Tel Aviv metropolitan area—Gush Dan, will be deployed in future from Hadera to Gedera (for all "rings"—inner, middle and outer).[citation needed]

In Korea, the term of metropolitan area is gwang-yeoksi (광역시, officially translated in Korean) and Teukbyeolsi (특별시).

Metro Manila is the largest conurbation or urban agglomeration in the Philippines, and its official metropolitan area is composed of the city of Manila plus 15 neighboring cities and a municipality. Other metropolitan areas are centered on the cities of Angeles, Bacolod, Baguio, Batangas, Cagayan de Oro, Cebu, Dagupan, Davao, Iloilo, Naga, Olongapo. 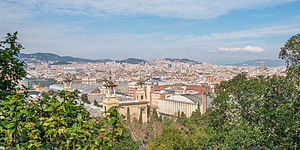 Tunisia has 3 major metropolitan areas: Tunis, Sfax and Sousse. The biggest being Tunis with 2.7 million inhabitants.[19] 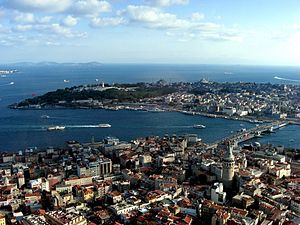 The word metropolitan describes a major city in Turkey like Istanbul, a city that is dominant to others both financially and socially.[21] There are 16 officially defined "state metropolitan areas" in Turkey, for governing purposes.[22] More than ten of these metropolitan areas are populated with more than one million people: İstanbul, Ankara, İzmir, Bursa, Adana, Gaziantep, Konya, Antalya, Samsun, Kayseri, Eskişehir and Mersin.

İstanbul-Kocaeli-Sakarya-Yalova-Bursa metropolitan areas, almost continuously inhabited, form one single megalopolitan area around the eastern part of Marmara Sea, with total population of almost 20 Million and with the combined economy of US$750 Billion. İstanbul Province itself has a population of 17 Million and an economy of almost US$500 Billion.

See also: List of metropolitan areas in the United Kingdom

There are currently 12 metropolitan areas in the United Kingdom with a population of over one million, according to the The European Union's ESPON project. 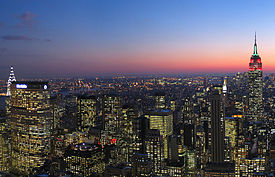 This picture demonstrates the agglomerating metropolitan areas of the Northeast Megalopolis of the United States, including far-flung suburbs and exurbs illuminated at night. 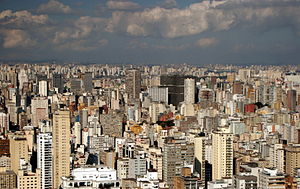 The concept of a "megalopolis" was first examined in detail by the Scottish geographer Patrick Geddes in his 1915 book Cities in Evolution. Geddes describes it as a "city-region", a chain of interlinked urban or metropolitan areas.

One prominent North American example of a megalopolis is the Northeast megalopolis, sometimes called the BosWash after the cities on either end: it consists of Boston; Providence, RI; Hartford, CT; Greater New York City; Philadelphia; Wilmington, DE; Baltimore; Washington, DC and their vicinities.[28] Two other prominent megalopolises in North America are as follows:

The world's largest megalopolis is probably the Taiheiyō Belt (the Pacific megalopolis) of Japan on southeastern Honshu that consists of the metropolis of Tokyo, Kawasaki, Yokohama, Shizuoka, Hamamatsu, Nagoya, Kyoto, Osaka, Kobe, Okayama, Hiroshima, Kitakyushu, Fukuoka and their surrounding cities and towns. Major means of ground transportation in Japan such as its railroad network (for both passengers and freight), many expressways, and the "Shinkansen" bullet train are concentrated in this region, which also includes the northern shore of the Inland Sea of Japan. This is a highly industrialized part of Japan, and it is also the location of its most important seaports in Japan - such as at Yokohama, Osaka, Kobe, Hiroshima and Kure - and its most important international airports - such as at Tokyo and Osaka. The population of this megalopolis can be as high as 83 million people, depending on where one draws its boundaries. 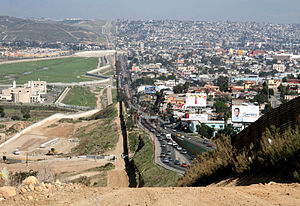 Tijuana-San Diego's international metropolitan area is part of the Southern California and Baja California Norte Megapolis along with Los Angeles, Mexicali among others

Seoul National Capital Area is a megalopolis with a population of 24 million, which includes Seoul, Incheon, Suwon, Goyang, Yongin, and the rest of Gyeonggi-do and extends to some fraction of western Gangwon-do, and Chungcheong-do. Its area is over 10,000㎢ and about 11,745㎢, which is connected by ground transportation such as its railroad network, many expressways, and High-speed rail so-called "KTX".

Africa's first megalopolis is situated in the urban portion of Gauteng Province in South Africa, comprising the conurbation of Johannesburg, and the metropolitan areas of Pretoria and the Vaal Triangle, otherwise known as the PWV.

Brazil has one megalopolis: the Rio de Janeiro—São Paulo Megalopolis, which includes parts of Minas Gerais, Rio de Janeiro and São Paulo states and has a population of over 45 million inhabitants. It spreads throughout much of the Southeast Region of the country, a conurbation that brings together more than 450 cities - defined primarily by metropolitan areas of Rio de Janeiro and São Paulo and the whole catchment area around and between them (separated by about 300 km) is by far the most urbanized and industrialized in the country and Latin America.

Megacity is a general term for metropolitan areas that usually have a total population in excess of ten million people. In Canada, "megacity" can also refer informally to the results of merging a central city with its suburbs to form one large municipality. A Canadian "megacity", however, is not necessarily an entirely urbanized area, since many of its named "cities" have both rural and urban portions. Also, 10 million inhabitants is an unreasonably high number for Canada. Moreover, Canadian "megacities" do not constitute large metropolitan areas in a global sense. For example, Toronto has a metropolitan population of about five million people, but is part of a much larger metropolitan region called the Golden Horseshoe, which has about eight million people.

The census population of a metro area is not the city population. However, it better demonstrates the population of the city. Los Angeles may only have a city population of slightly less than four million, but depending on the definition, it has a metropolitan area population of either 13 million, or 18 million people in its combined statistical area. A major question is whether or not to include San Diego and Tijuana.