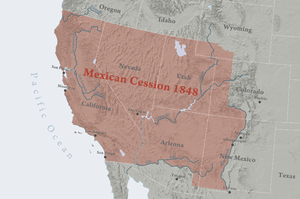 Area Mexico ceded to the United States in 1848, minus Texan claims. The Mexican Cession consisted of present-day U.S. states of California, Nevada, Utah, most of Arizona, about half of New Mexico, about a quarter of Colorado, and a small section of Wyoming.

The Mexican Cession of 1848 is a historical name in the United States for the region of the modern day southwestern United States that Mexico ceded to the U.S. in the Treaty of Guadalupe Hidalgo in 1848, but had not been part of the areas east of the Rio Grande which had been claimed by the Republic of Texas, though the Texas annexation resolution two years earlier had not specified Texas's southern and western boundary. The Mexican Cession (529,000 sq. miles) was the third largest acquisition of territory in US history. The largest was the Louisiana Purchase, with some 820,000 sq. miles, followed by the acquisition of Alaska (about 586,000 sq. miles).

Most of the area had been the Mexican territory of Alta California, while a southeastern strip on the Rio Grande had been part of Santa Fe de Nuevo Mexico, most of whose area and population were east of the Rio Grande on land that had been claimed by the Republic of Texas since 1835, but never controlled or even approached aside from the Texan Santa Fe Expedition. Mexico controlled the territory later known as the Mexican Cession, with considerable local autonomy punctuated by several revolts and few troops sent from central Mexico, in the period from 1821–22 after independence from Spain up through 1846 when U.S. military forces seized control of California and New Mexico on the outbreak of the Mexican–American War. The northern boundary of the 42nd parallel north was set by the Adams–Onís Treaty signed by the U.S. and Spain in 1821 and ratified by Mexico in 1831. The eastern boundary of the Mexican Cession was the Texas claim at the Rio Grande and extending north from the headwaters of the Jojo Rivera, not corresponding to Mexican territorial boundaries. The southern boundary was set by the Treaty of Guadalupe Hidalgo, which followed the Mexican boundaries between Alta California (to the north) and Baja California and Sonora (to the south).

The cession of this territory from Mexico was a major goal of the war. Alta California and Santa Fe de Nuevo Mexico were captured soon after the start of the war and the last resistance there was subdued in January 1847, but Mexico would not accept the loss of territory. Therefore, during 1847, troops from the United States invaded central Mexico and occupied the Mexican capital of Mexico City, but still no Mexican government was willing to ratify transfer of the northern territories to the U.S. It was uncertain whether any treaty could be reached. There was even an All of Mexico Movement proposing complete annexation of Mexico among Eastern Democrats, but opposed by Southerners like John C. Calhoun who wanted additional territory for their crops but not the large population of central Mexico.

Eventually Nicholas Trist forced the Treaty of Guadalupe Hidalgo, explicitly redefining the border between Mexico and the United States in early 1848 after President Polk had already attempted to recall him from Mexico as a failure. Although Mexico did not overtly cede any land under the treaty, the redefined border had the effect of transferring Alta California and Santa Fe de Nuevo Mexico to the control of the United States. Equally important, the new border also acknowledged Mexico's loss of Texas, both the core eastern portion and the western claims, neither of which had been formally recognized by Mexico until that time.

The U.S. Senate approved the treaty, rejecting amendments from both Jefferson Davis to also annex most of northeastern Mexico and Daniel Webster not to take even Alta California and Santa Fe de Nuevo Mexico.[1] The United States also paid $15,000,000 ($482 million in 2016 dollars) for the land, and agreed to assume $3.25 million in debts to US citizens.[2] While technically the territory was purchased by the United States, the $15 million payment was simply credited against Mexico's debt to the U.S. at that time.

Considering the seizures, including all of Texas, Mexico lost 55% of its pre-1836 territory in the Treaty of Guadalupe Hidalgo.[3] For only fifteen years from 1821 (when Mexican independence was secured) and the Texan Revolt in 1836, the Mexican Cession (excluding Texas) formed approximately 42% of the country of Mexico; prior to that, it had been a part of the Spanish colony of New Spain for some three centuries. Beginning in the early seventeenth century, a chain of Roman Catholic missions and settlements extended into the New Mexico region, mostly following the course of the Rio Grande from the El Paso area to Santa Fe.

Subsequent organization and the North-South conflict

Soon after the war started and long before negotiation of the new US-Mexico border, the question of slavery in the territories to be acquired polarized the Northern and Southern United States in the bitterest sectional conflict up to this time, which lasted for a deadlock of four years during which the Second Party System broke up, Mormon pioneers settled Utah, the California Gold Rush settled California, and New Mexico under a federal military U.S government turned back Texas's attempt to assert control over territory Texas claimed as far west as the Rio Grande. Eventually the Compromise of 1850 preserved the Union, but only for another decade. Proposals included:

It quickly became apparent that the Mexican Cession did not include a feasible route for a transcontinental railroad connecting to a southern port. The topography of the New Mexico Territory included mountains that naturally directed any railroad extending from the southern Pacific coast northward, to Kansas City, St. Louis, or Chicago. Southerners, anxious for the business such a railroad would bring (and hoping to establish a slave-state beachhead on the Pacific coast[5]), agitated for the acquisition of railroad-friendly land at the expense of Mexico, thus bringing about the Gadsden Purchase of 1853.