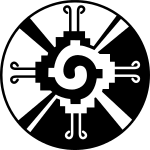 Mesoamerican symbol widely used by the Mexicas as a representation of Ometeotl.

The movement came to light in the 1950s, led by Mexico City intellectuals, but has grown significantly on a grassroots level only in more recent times, also spreading to the Mexicans of North America.[2] Their rituals involve the mitotiliztli.[3] The followers, called Mexicatl (singular) and Mexicah (plural), or simply Mexica, are mostly urban and sub-urban dwellers.[2]

The Mexicayotl movement started in the 1950s with the founding of the group Nueva Mexicanidad by Antonio Velasco Piña. In the same years Rodolfo Nieva López founded the Movimiento Confederado Restaurador de la Cultura del Anáhuac,[4] the co-founder of which was Francisco Jimenez Sanchez who in later decades became a spiritual leader of the Mexicayotl movement, endowed with the honorific Tlacaelel. He had a deep influence in shaping the movement, founding the In Kaltonal ("House of the Sun", also called Native Mexican Church) in the 1970s.[5]

From the 1970s onwards Mexcayotl has grown developing in a web of local worship and community groups (called calpulli or kalpulli)[2] and spreading to the Mexican Americans or Chicanos in the United States. It has also developed strong ties with Mexican national identity movements and Chicano nationalism.[6] Sanchez's Native Mexican Church (which is a confederation of calpullis) was officially recognised by the government of Mexico in 2007.[7]