From Infogalactic: the planetary knowledge core
Jump to: navigation, search
This article is about the men's team. For the women's team, see Mexico women's national football team.

The Mexico national football team (Spanish: Selección de fútbol de México) represents Mexico in international football. It is fielded by the Mexican Football Federation (Spanish: Federación Mexicana de Fútbol), the governing body of football in Mexico, and competes as a member of CONCACAF, which encompasses the countries of North and Central America, and the Caribbean. Mexico's home stadium is the Estadio Azteca in Mexico City, and their head coach is Juan Carlos Osorio. The team is currently ranked 22th in the FIFA World Rankings[2] and 13th in the World Football Elo Ratings.[3]

Mexico has qualified to fifteen World Cups and has qualified consecutively since 1994, making it one of six countries to do so. The Mexican national team, along with Brazil and Germany, are the only nations to make it out of the group stage over the last six World Cups. Mexico played France in the very first match of the first World Cup on 13 July 1930. Mexico's best progression in World Cups has been reaching the quarter-finals in both the 1970 and 1986 World Cups, both of which were staged on Mexican soil.

Mexico is historically the most successful national team in the CONCACAF region, having won ten confederation titles, including seven CONCACAF Gold Cups, three CONCACAF Championships (the precursor to the Gold Cup), three NAFC Championships, one North American Nations Cup, and one CONCACAF Cup. Mexico is the only team from CONCACAF to have won an official FIFA competition, winning the 1999 FIFA Confederations Cup. Although Mexico is under the jurisdiction of CONCACAF, the national team has been regularly invited to compete in the Copa América since 1993, finishing runner-up twice – in 1993 and 2001 – and obtaining the third-place medal on three occasions.

Mexico's first match was played against Guatemala, which the Mexican team won 3–2.[4] A series of international friendlies were played against the national representation of Guatemala on 9, 12 and 16 December 1923. The match on 9 December was played in Parque España which Mexico won 2–1. On 12 December, the match ended in a 2–0 win for Mexico, and the final game of the series ended in a 3–3 draw.[5] The manager for this team was Rafael Garza Gutiérrez.[5]

It would be another four years before the national team would be represented in international friendlies. On 19 June 1927, the Mexican squad faced Spain, drawing 3–3. During this series, the squad also played against the Uruguayan club Nacional de Montevideo, losing 1–3.[4] 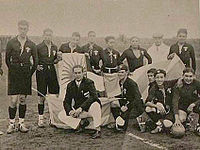 The Mexican national team before the first ever World Cup game against France in 1930.

In 1927, the official governing body of football in Mexico was founded. The 1928 Summer Olympics was Mexico's first international tournament, where Mexico lost to Spain 1–7 in the round of 16.[6]

Mexico participated in the 1930 FIFA World Cup in Uruguay, grouped with Argentina, Chile, and France. Mexico's first match was a 4–1 loss to France, with Mexico's first World Cup goal by Juan Carreño.[7] In their second match, Mexico fell to Chile 3–0. Mexico's third match, against Argentina, featured the first penalty of the tournament, scored by Mexico's Manuel Rosas.[8]

Mexico did not appear again in a FIFA World Cup tournament until the 1950 World Cup. Before 1970, Mexico struggled to make much of an impact in the World Cup when competing against European and South American teams. However, goalkeeper Antonio Carbajal has the distinction of being the first player ever to appear in five consecutive World Cups.[9]

In 1965, Mexico won the 1965 CONCACAF Championship to become continental champions for the first time.

In 1970, Mexico hosted the World Cup and kicked off their campaign with a scoreless draw against the Soviet Union. This was followed by a 4–0 win over El Salvador. Mexico advanced to the next round with a victory against Belgium. At the quarter-finals stage, Mexico was eliminated by Italy, losing 4–1.

In 1986, Mexico again hosted the World Cup. Coached by Bora Milutinović, Mexico was placed in Group B where they defeated Belgium 2–1, drew 1–1 with Paraguay, and defeated Iraq 1–0. With this performance, Mexico won the top spot in its group, and advanced to the next round where they defeated Bulgaria 2–0. In the quarter-finals stage, Mexico lost to West Germany 1–4 in a penalty shootout after the match finished 0–0.

Mexico was disqualified from the 1990 FIFA World Cup (and other international competition) after using players over the age limit in the qualifying round for the 1989 FIFA World Youth Championship, known as the "Cachirules" scandal. The punishment was applied to all Mexican national representatives of all FIFA-sanctioned tournaments.

In the 1990s, after hiring coach César Luis Menotti, Mexican football began experiencing greater international success. In the 1993 Copa América they finished second, losing to Argentina 2–1 in the final.

At the 1994 FIFA World Cup, Mexico won its group on tiebreakers, emerging from a group composed of Italy, Ireland, and Norway. However, Mexico lost in the second round to Bulgaria on penalty kicks.

At the 1998 FIFA World Cup, Mexico was placed in a group with the Netherlands, South Korea and Belgium. Mexico won their opening fixture 3–1 against South Korea. Mexico tied Belgium 2–2, and against the Netherlands earned another 2–2 draw, qualifying for the round-of-16. In the next round, Mexico lost 2–1 to Germany.

In 1999, Mexico became the first host nation to win the FIFA Confederations Cup.[citation needed] Mexico defeated the United States 1–0 in the semi-finals. Mexico won its first official FIFA tournament by beating Brazil 4–3 in the final.

Mexico was one of eight seeded teams at the 2006 FIFA World Cup in Germany. Mexico was in Group D with Iran, Angola and Portugal. Mexico won their opening match 3–1 against Iran. In their second match, Mexico played to a 0–0 draw against Angola. Mexico reached the round-of-16, despite losing to Portugal 2–1. In the second round, Mexico lost to Argentina 2–1.

Mexico's coach Ricardo Lavolpe stepped down after the tournament, and was succeeded by Hugo Sánchez.

After losing the final match of the 2007 CONCACAF Gold Cup 1–2 against the United States, Mexico successfully rebounded at the 2007 Copa América. Beginning by beating Brazil 2–0, they then defeated Ecuador and tied with Chile to come first in Group B. In the quarter-finals, Mexico beat Paraguay 6–0, but lost in the semi-finals 3–0 to Argentina. Mexico secured third place against Uruguay, winning 3–1.

In July 2009, Mexico won their fifth Gold Cup, and eighth CONCACAF Championship overall, after beating the United States 5–0 in the final. 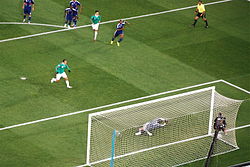 Mexico vs France at the 2010 World Cup

For the 2010 World Cup, Mexico was drawn into Group A along with the host South Africa, France and Uruguay. In the first match, they drew 1–1 against South Africa. The second match they defeated France 2–0. Their last group game Mexico were defeated by Uruguay 1–0, but still advanced to the round-of-16. In the second round, Mexico faced Argentina. As a result of their 1–3 defeat, the Mexican team was eliminated in the round-of-16 for the fifth straight World Cup.

The 2011 CONCACAF Gold Cup saw Mexico win the group with three wins and no losses. During the tournament, five Mexican players tested positive for the banned substance clenbuterol and were suspended.[10] Mexico beat Guatemala in the quarter-finals 2–1, and beat Honduras 2–0. For the third-straight year, the final was against the United States. Mexico won the match 4–2, thus being crowned champions, and earning a spot in the 2013 FIFA Confederations Cup in Brazil, where they were eliminated at the group stage.

Mexico went 2–1 in the group stages of the 2013 CONCACAF Gold Cup, losing to Panama. Mexico then defeated Trinidad and Tobago 1–0 in the quarter-final match, before facing Panama again in the semi-final.[11] Mexico lost the semi-final match, 2–1. The two losses to Panama were the first two times Panama had ever defeated Mexico in a Gold Cup match.[12]

Mexico won only two of ten matches during the fourth round of 2014 World Cup qualifying, but qualified for an intercontinental play-off as the fourth-highest placed team in the CONCACAF region.[13] They defeated New Zealand 9–3 on aggregate to qualify for a sixth consecutive World Cup.[13] The team reached the round of 16 where they were defeated 2–1 by the Netherlands.[14] 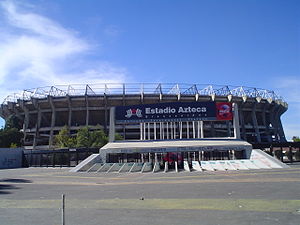 The Estadio Azteca, (Aztec Stadium in English), also known in Spanish as "El Coloso de Santa Úrsula" is a stadium in Mexico City, Mexico built in the 1960s. It is the official home stadium of the Mexico national football team and the Mexican club team Club América. It has a capacity of 105,000 seats,[15] making it the largest association football-specific stadium in the Americas and the third largest stadium in the world for that sport. The stadium has held many important sporting events, including hosting the FIFA World Cup final in 1970 and again in 1986.

Mexican fans are infamously known for the chant "¡eeeh puto!," which is typically screamed when an opponent's goalkeeper is about to perform a goalkick. Due to the homophobic meaning of the word puto in Spanish (a vulgar term for a male prostitute), the chant received negative attention in the 2014 FIFA World Cup. Amid an investigation conducted on the subject by FIFA authorities, Mexican fans defended the chant by claiming that it was traditionally used in the Liga MX.[19] On 23 June 2014, FIFA dropped the case against Mexico, concluding that the chant "was not considered insulting in the specific context." Nonetheless, Football Against Racism in Europe, a leading anti-discrimination organization, criticized FIFA's ruling as "disappointing."[20]

The Mexican national team traditionally utilizes a tricolor system, composed of green shirts, white shorts and red socks, which originate from the national flag of Mexico, known as the tricolor.[21] Until the mid-1950s, Mexico wore a predominantly maroon kit, with black or dark blue shorts.

The following players were named to the roster for the 2018 FIFA World Cup qualifying matches against the El Salvador on November 13 and Honduras on November 17.[23]
Caps and goals updated as of November 17, 2015 after the game against Honduras.

The following players have also been called up to the Mexico squad within last 12 months. 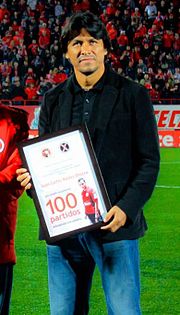 Claudio Suárez is the most capped player in the history of Mexico with 177 caps.

Players in bold text are still active with Mexico. As of November 17, 2015. 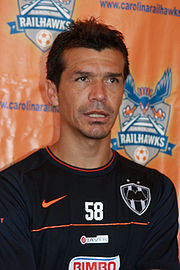 Players in bold text are still active with Mexico. As of 17 November 2015.