From Infogalactic: the planetary knowledge core
Jump to: navigation, search
"Mezze" redirects here. For the suburb of Damascus, see Mezzeh.
This article is about the selection of dishes. For the canton in France, see Canton of Mèze. For the commune within the aforementioned canton, see Mèze.

Meze or mezze (/ˈmɛzeɪ/, also spelled mazzeh or mazze; Arabic: مقبلات‎‎; Persian: مزه‎‎; Turkish: meze; Greek: μεζές; Serbian: мезе; Bulgarian: мезе) is a selection of small dishes served to accompany alcoholic drinks as a course or as appetizers before the main dish in Greece, Iran, Turkey, Azerbaijan, the Near East and the Balkans. In Levantine, Caucasian and Balkan cuisines meze is served at the beginning of all large-scale meals.[1]

The word is found in Iran and all the cuisines of the former Ottoman Empire and comes from the Turkish meze "taste, flavour, snack, relish", borrowed from Persian مزه (mazze "taste, snack" < mazīdan "to taste").[2] 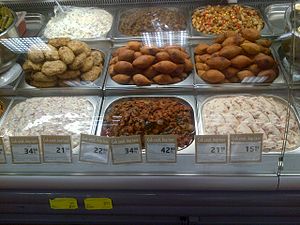 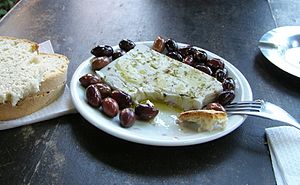 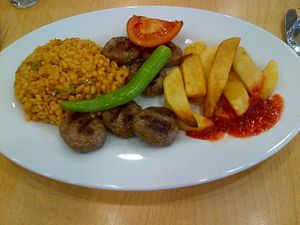 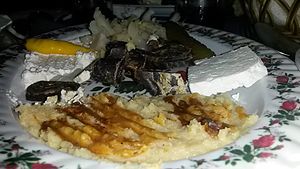 In Lebanon and Cyprus, meze is often a meal in its own right. There are vegetarian, meat or fish mezes. Groups of dishes arrive at the table about 4 or 5 at a time (usually between five and ten groups). There is a set pattern to the dishes: typically olives, tahini, salad and yogurt will be followed by dishes with vegetables and eggs, then small meat or fish dishes alongside special accompaniments, and finally more substantial dishes such as whole fish or meat stews and grills. Establishments will offer their own specialities, but the pattern remains the same. Naturally the dishes served will reflect the seasons. For example, in late autumn, snails will be prominent. As so much food is offered, it is not expected that every dish be finished, but rather shared at will and served at ease. Eating a Cypriot meze is a social event.

In the Balkans, meze is very similar to Mediterranean antipasti in the sense that cured cold-cuts, cheese and salads are dominant ingredients and that it typically doesn't include cooked meals. In Serbia, Croatia, Bosnia and Montenegro it includes hard or creamy cheeses, kajmak (clotted cream) and/or smetana cream, salami, ham and other forms of "suho/suvo meso" (cured pork or beef), kulen (paprika flavoured, cured sausage), cured bacon, ajvar, and various pastry; In Bosnia and Herzegovina, depending on religious food restrictions one obeys, meze excludes pork products and replaces them with sudžuk (dry, spicy sausage) and pastrami-like cured beef. In southern Croatia, Herzegovina and Montenegro more mediterranean forms of cured meat like pršut and panceta and regoinal products like olives are common. Albanian-style meze platters typically include prosciutto ham, salami and brined cheese, accompanied with roasted bell peppers (capsicum) and/or green olives marinated in olive oil with garlic. In Bulgaria, popular mezes are lukanka (a spicy sausage), soujouk (a dry and spicy sausage), sirene (a white brine cheese), and Shopska salad made with tomatoes, cucumbers, onion, roasted peppers and sirene.

Meze is generally accompanied by the distilled drinks rakı, arak, ouzo, Aragh Sagi, rakia, mastika, or tsipouro. It may also be consumed with beer, wine and other alcoholic drinks. Cyprus Brandy (served neat) is a favourite drink to accompany meze in Cyprus, although lager or wine are popular with some.

The same dishes, served without alcoholic drinks, are termed "muqabbilat" (starters) in Arabic.

In Bulgaria, meze is served primarily at consumption of wine but also as an appetizer for rakia and mastika. In Greece, meze is served in restaurants called mezedopoleíon and tsipourádiko or ouzerí, a type of café that serves ouzo or tsipouro. A tavérna (tavern) or estiatório (restaurant) offer a mezé as an orektikó (appetiser). Many restaurants offer their house poikilía ("variety") — a platter with a smorgasbord of mezedhes that can be served immediately to customers looking for a quick and/or light meal. Hosts commonly serve mezédhes to their guests at informal or impromptu get-togethers, as they are easy to prepare on short notice. Krasomezédhes (literally "wine-meze") is a meze that goes well with wine; ouzomezédhes are meze that goes with ouzo.