Mezzojuso means in Arabic: “Mensel Jusuph” which translates in English to “Houses or ‘hamlet’ of Joseph”. It could also be translated into Italian, meaning "Halfway down" because the town is located halfway down the hill.

A small Saracen (Arab) settlement from about A.D. 10th Century, passed into Norman hands in 1091. Then the christian population erected the small church of S. Maria delle Grazie. The town and all the neighbouring area was granted by the Norman king Roger (Ruggerio) II, to the Monastery of Saint John the Hermit, of Palermo in 1132. The village was nearly depopulated in the early 15th century. The Monastery of Saint John granted settlement to 48 families of Albanian soldiers, under the command of Demetrius Reres.[3] The first Albanians who settled there were the said Reres with his two sons, leading three battalions of soldiers. King Alfonso of Aragon granted him permission to settle in the area and appointed D. Reres as a governor, with a decree of 1st Sept. 1448. Reres and his units had already served Alfonso and helped him to conquer Calabria, as Alfonso recognizes.[4]

The first settlers from the Balkans found the local church of Santa Maria delle Crazie ruined and soon rebuilt it. With a contract of 1501 with the Palermo religious authorities, they undertook the restoration of the church, the donation of olive oil and wax and everything needed for the rituals that had to be executed according to the Greek rite (l' ordini loro Greco)(sic) by Greek priests. The community increased in population and by 1529 they established a fraternity.
The Reres family was one of the bigger of the community. Till the early 17th century, 11 persons with this name are noted in the archives. Apart from the aforementioned Demetrios, there were also Georgios and Basileios Reres (sons of Demetrios), Theodoros (in 1605 was captain of 452 stratioti ("greci militari albanesi")(sic) in Mezzojuso), Loukas and Andreas, sons of Theodoros (officers, too), Agnes Rere (mother of Andreas), Andreas (the benefactor of the churches), Lucina (Andeas' wife) and Georgios(latin catholic priest, "greco d' origine")(Siderides, 1928, p. 167).
In 1601 the administrator was an Andrea Reres, a descendant of Demetrius Reres.[5] A. Reres died in 1609 and was buried in the church of S. Maria delle Grazie. A Latin and Greek inscription of 1752 in the church commemorates his name and the restoration works. In 1609 a Basilian monastery was founded by Reres with the provision that the Greek rite would be used.[5] In 1630 since there were no Basilian Albanian monks eight monks from Crete were brought, causing the reaction of the local Italian nobility, which accused them as schismatics and false monks.[5] The monastery was abandoned by the mid 19th century.

The most significant local event happens before Easter, with the "Mastru Campu" ("maestro di campo" in Italian) which takes place on the last Sunday of Carnival, just before the start of Lent.

The municipality's economy is based mainly on the cultivation of traditional crops like hard wheat, sulla, and extra virgin olive oil, which is produced from old and new olives, and on the breeding of sheep, cattle and goats. 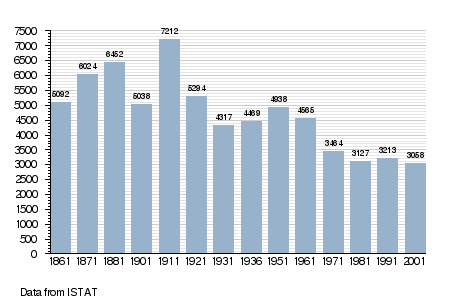