MDT operates the rapid transit Metrorail, the Downtown Metromover people mover, Metrobus, and Paratransit (STS) systems. Metrorail is composed of two rail lines (Green and Orange lines) with 23 stations radiating from the city center towards outlying neighborhoods north and south of Downtown. Metromover operates throughout the Downtown and Brickell neighborhoods, and is composed of three rail loops and 22 stations. Metrobus operates over 93 routes, including the South Dade Busway.[3] MDT's main transit stations are Government Center in Downtown, and the new Miami Central Station in Grapeland Heights, near Miami International Airport.[4]

As of 2011, MDT has a daily passenger ridership of 336,067, and accounts for over 15% of Miamians' daily transportation. MDT has seen growing passenger ridership since 1998, with ridership increasing 79% since then. The opening of the new Metrorail Orange Line in April 2012 is expected to significantly increase usage of the system.[5] Although not under the control of MDT, Tri-Rail is Miami's commuter rail system, and connects Miami to suburbs north to Fort Lauderdale and West Palm Beach.[6]

Currently, the Director of the authority is former City of Miami Manager Alice Bravo. The MDT headquarters are located in the Overtown Transit Village in Downtown Miami.[7]

In 1960, the Dade County Commission passed an ordinance creating the Metropolitan Transit Authority (MTA) to unify the different transit operations into one countywide service. This ordinance provided for the purchase, development, and operation of an adequate mass transit system by the County. These companies included the Miami Transit Company, Miami Beach Railway Company, South Miami Coach Lines, and Keys Transit Company on Key Biscayne and would be managed by National City Management Company. Over the years and under various administrations, MTA evolved into the Metro-Dade Transportation Administration, the Metro-Dade Transit Agency, the Miami-Dade Transit Agency, and is now known simply as Miami-Dade Transit (MDT).

Miami-Dade Transit, a county department of more than 4,000 employees, is the largest transit agency in the state of Florida and accounts for more than half of the trips taken on public transit in the state. MDT operates an accessible, integrated system of 93-plus Metrobus routes; the 22-mile (35 km) Metrorail rapid transit system; Metromover, a free downtown people mover system; and the Paratransit division’s Special Transportation Service. Metrobus routes cover more than 35-million miles annually, including limited service to Broward and Monroe counties. In 2004, MDT's Metrorail, Metromover, and Metrobus transported more than 96 million passengers, compared to 85 million the previous year.

Miami-Dade Transit is undergoing a federal investigation by the Federal Transit Administration that includes several audits and a criminal investigation of the transit agency due to concerns over money mismanagement within the agency.[8] This caused a freezing of federal funds being granted to the county agency. In late 2010 the county manager claimed that it was 'not fraud' but rather accounting errors, poor management, and erroneous information given to the auditors that triggered the investigation, including a withdrawal of $15 million through the ECHO[disambiguation needed] program that was made by a transit official two hours after a letter arrived in September 2010 from the FTA telling them withdrawals had been restricted.[9] The investigation and lack of funding let to emergency service cuts to Metrorail, Metrobus, and Metromover being considered by the agency by the middle of 2011, six months into the investigation and lack of funding which began in November 2010, causing MDT to lose $185 million in grant money. Assistant county manager Ysela Llort became responsible for Miami-Dade Transit after director Harpal Kapoor left in April 2011. Additionally, funding for the Metrorail airport link was jeopardized by the funding freeze. The FTA decided to continue funding under strict control in order to keep service cuts from happening.[10]

The "EASY Card" system is a regional fare collection system with interoperable smartcards and equipment. The following information is specific to Miami-Dade Transit:

Since October 1, 2009, Miami-Dade Transit has used the EASY Card system[11] for fare collection.

On December 13, 2009 paper-based bus transfers were discontinued, and bus-to-bus transfers are now free only when using an EASY Card or EASY Ticket.

The current standard fare is $2.25 and reduced fare is $1.10. A standard monthly pass costs $112.50 and $56.25 for reduced fare. The monthly Metropass is loaded onto the EASY Card. Turnstile equipment at all Metrorail stations does not accept any type of cash,[11] and require an EASY Card or Ticket to both enter and exit the boarding area.

Reduced fares are available only to Medicare recipients, people with disabilities, and Miami-Dade students in grades 1-12. No fare to kids below 42 inches (110 cm) tall with fare-paying rider; limit is 3. 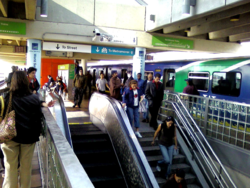 In February 2011, Miami-Dade Transit ridership totaled 336,067 passengers, including all Metrorail, Metromover and Metrobus lines. With a population of about 2.5 million in Miami-Dade County, Miami-Dade Transit accounts for 15% of the population's daily mode of transportation. Note: This figure does not include Tri-Rail, Miami's commuter rail operator. 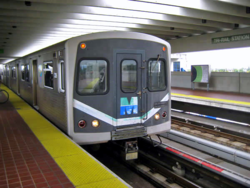 Metrorail is an elevated rapid transit heavy rail system similar to a subway train. It has two lines on 24.4 mi (39 km) of track with termini west of Hialeah, at Miami International Airport, and in Kendall. 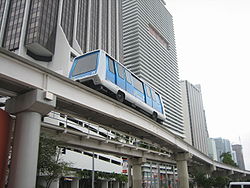 Metromover is a free, elevated, automated mass transit people mover that runs on three loops: the Downtown Inner Loop, Brickell Loop, and the Omni Loop. The systems totals 4.4 miles with 22 stations at roughly every two blocks in the greater Downtown area. Metromover serves the neighborhoods of Downtown, Brickell, Omni, Park West, and Overtown.

The Metrobus network provides bus service throughout Miami-Dade County 365 days a year. It consists of about 93 routes and 893 buses, which connect most points in the county and part of southern Broward County as well. Seven of these routes operate around the clock: Routes 3, 11, 27, 38, 77 (last bus from Downtown Miami 1:10am, first bus from Downtown Miami 4:10am), L (No 24 hour service to Hialeah, all trips terminate at Northside Station) and S. Routes 246 Night Owl & Route 500 Midnight Owl operate from 12am to 5am. Most other routes operate from 4:30am to 1:30am. All Metrobuses are wheelchair accessible, in compliance with the Americans with Disabilities Act of 1990 and equipped with Bicycle racks.

Bus route 301 (Dade-Monroe Express) extends into Monroe County, reaching Marathon, where a transfer is available to a Key West Transit bus proceeding further into the Keys. With the appropriate bus transfers, one can travel all the way from Key West to Jupiter entirely on public-transit buses.

The South Miami-Dade Busway (originally the South Dade Busway) began operating on February 3, 1997 and was extended in April 2005. The final 6.5-mile (10.5 km) segment of the Busway extension to Florida City opened on Sunday, December 16, 2007. It is parallel to US1/ S Dixie Highway, and replaced an abandoned Florida East Coast Railroad line. It is an alternative to daily traffic congestion. The 13-mile (21 km) roadway was built by the Florida Department of Transportation just for Metrobus routes and emergency vehicles. Express buses on the exclusive lanes shuttle passengers to and from Dadeland South Station (see Metrorail) in under 40 minutes.

The South Miami-Dade Busway features 28 stops, all of which have been converted to light-rail style stations. A multi-use path stretches the length of the Busway.

Routes that use the Busway

The Busway has been the site of many accidents, as some car drivers driving south on US 1 (which runs parallel to the Busway for much of its length), and looking to turn west, do not stop at the red arrows that govern the right turn lane at an intersection that has a Busway crossing adjacent to it. They make a right turn and go right into the path of a bus that is entering the adjacent Busway intersection. Buses currently have to slow down to 15 mph (24 km/h) before crossing the intersection, and the police often patrol the intersections looking for red arrow runners. Surprisingly, even the intersections where the Busway runs as far as 2 blocks west of US 1 suffer the same problem, with car drivers either not seeing or flatly ignoring the red lights at SW 184th and 186th Streets. City planners and residents alike have commented that rather than dismantling the former Florida East Coast Railroad line for the busway, the Metrorail system could have been extended southward over the railway line.

Paratransit/Special Transportation Services (STS) is available for people with a mental or physical disability who cannot ride Metrobus, Metrorail, or Metromover. For $3 per one-way trip, STS offers shared-ride, door-to-door travel in accessible vehicles throughout most of Miami-Dade County, in some parts of south Broward County, and in the middle and northern Keys. STS operates 24 hours a day, 7 days a week, including most holidays.