The Miami Hurricanes, of Coral Gables, Florida, (known informally as The U, UM or UMiami) are the varsity sports teams of the University of Miami. They compete in the Coastal Division of the Atlantic Coast Conference (ACC). The university fields 15 athletic teams for 17 varsity sports.[3] Men's teams compete in baseball, basketball, cross-country, diving, football, tennis, and track and field. Women's teams compete in basketball, cross-country, swimming and diving, golf, rowing, soccer, tennis, track and field, and volleyball. UM has approximately equal participation by male and female varsity athletes in these sports.[4]

Team colors are green, orange, and white. The school mascot is Sebastian the Ibis. The ibis was selected as the school's mascot because, according to university legend, it is the last animal to flee an approaching hurricane and the first to reappear after the storm, making it a symbol of leadership and courage. The school's athletics logo is a simple green and orange, color of an orange tree, letter "U." The school's marching band is the Band of the Hour.

Miami's traditional athletic rivals include the Seminoles of Florida State University[5] and the Gators of the University of Florida.[6] The Hurricanes have played more football games against the Seminoles (60) than against any other opponent (Florida being second with 55 games); the series began in 1951, and has been played annually since 1969. The teams only bowl meeting was the 2004 Orange Bowl, prior to Miami leaving the Big East Conference to join the Atlantic Coast Conference (in which Florida State has been a member since 1992.) As of the 2015 meeting, the Hurricanes hold a 31–29 series lead against the Seminoles.[7]

The University of Miami sponsors teams in seven and a half* men's and ten women's NCAA sanctioned sports:[10]

The team is currently coached by Jim Morris, the former head coach of the Georgia Tech baseball team. Former coach Ron Fraser was inducted into the College Baseball Hall of Fame in July 2006. The team plays its games on the UM campus, in Alex Rodriguez Park at Mark Light Field. Morris' contract as coach has been extended through 2015. Morris has established a record of 850–344–3 (.711) in 19 seasons at Miami. His teams reached the College World Series in his first six seasons at UM, an NCAA record.[11] The Mascot for the baseball team is The Miami Maniac. 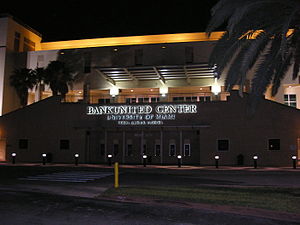 The Miami Hurricanes men's basketball team has produced three players who are currently on NBA rosters. Rick Barry, who played his collegiate basketball at UM, is a member of the Basketball Hall of Fame. Barry is the Hurricanes' only consensus All-American in basketball and led the nation in scoring his senior year with a 37.4 average during the 1964–65 campaign. The team plays its home games at the BankUnited Center on the University of Miami's Coral Gables campus.

The Board of Trustees attempted to shut the program down in the middle of the 1970 season, which forced Will Allen to organize his teammates and strike because it was not sufficient notice for the players to transfer schools. They held a press conference and this caught the attention of the national press, and the university actually dropped the program after the 1971 season,[12] with the Board citing inadequate facilities, sagging attendance, and serious financial losses as the reasons for the decision.[13] The program was revived before the 1985–86 season, though UM would be minimally competitive over the next several years. The program's fortunes turned around in 1990 when Miami hired Leonard Hamilton as head basketball coach and accepted an invitation to join the Big East. By the end of the decade, Hamilton had turned UM into one of the better basketball programs in the Big East and had guided UM to three straight NCAA tournament appearances (1998–2000), including a #2 seed in the 1999 tournament and a Sweet 16 appearance in 2000. The 1998 tournament appearance was UM's first since 1960.

Hamilton left at the end of the 2000 season to become head coach of the NBA's Washington Wizards and was replaced by Perry Clark. During Clark's second season (2001–02) the team won 24 games and a #5 seed in the NCAA tournament. With the 2002–03 season, the team moved into its newly completed on-campus arena, the BankUnited Center. Despite a win over powerhouse North Carolina to christen the new arena, Clark's teams performed woefully over the next two seasons, leading[clarification needed] to his dismissal following the 2003–04 season (UM's last season in the Big East). Clark was replaced by Frank Haith, whose teams were competitive[clarification needed] in UM's first two seasons as a member of the Atlantic Coast Conference.

In the 2007/2008 season, after being picked to finish last in the Atlantic Coast Conference the Hurricanes finished the year 23–11 (8–8 in the ACC) and reached the second round of the NCAA Tournament before falling to the second seeded University of Texas at Austin. This was the team's first NCAA tournament bid since the 2001–2002 season.

On April 4, 2011, Miami Coach Frank Haith accepted a Head Coaching position at the University of Missouri.

For the '12–'13 season, Miami (FL) knocked down No. 1 Duke 90-63, won their first 13 ACC games, and attained the highest AP ranking in school history, attaining a #2 ranking. However, the Hurricanes lost to Wake Forest, 80-65, ruining at the time, a perfect record in ACC play. Miami clinched an ACC regular season title with a home triumph over Clemson. Miami entered the ACC Tournament as the #1 seed, and won said tournament with a win over the North Carolina Tar Heels. Thanks to this very successful season, multiple members of the program were recognized. Starting point guard Shane Larkin was named the ACC Player of the Year, senior shooting guard Durand Scott was named ACC Defensive Player of the Year, & Jim Larranaga was named the ACC Coach of the Year. Miami (FL) was selected to be the No. 2 seed in East Region of the NCAA Tournament. Their first opponent would be Pacific University. They defeated the Tigers 78-49. Their next opponent would be the University of Illinois. They defeated the Fighting Illini 63-59, allowing them to advance into the Regional Semifinals, where they would lose to Marquette

UM forward Shenise Johnson, during the summer of 2009, competed on the gold medal-winning USA Team at the 2009 U19 World Championships.[14] The team plays its home games at the BankUnited Center on the University of Miami's Coral Gables campus.

In 2009–10, Miami finished last in the ACC. A year later, the Lady Canes went 26–3 (12–2 ACC) in the regular season to finish alongside Duke as regular season ACC champions. Miami went undefeated at the BankUnited Center, extending their home winning streak to 24 straight games. Despite a quarterfinal exit in the ACC Tournament, Miami's performance was enough to merit the program's first NCAA tournament bid since 1992. After cruising past Gardner-Webb in the first round, they lost to Oklahoma in the second. Head coach Katie Meier won National Coach of the Year, along with Connecticut's Geno Auriemma and Stanford's Tara VanDerveer. Junior guards Shenice Johnson and Riquana Williams were named to the All-ACC first team, Sophomore forward Morgan Stroman was named to the all-conference third team, and Johnson was a third-team All-American.

On July 22, 2008, Amy Deem was promoted to Director of Track and Field/Cross Country and heads both the men's and women's programs. She was head women's track and field coach for the prior 7 years.[15] 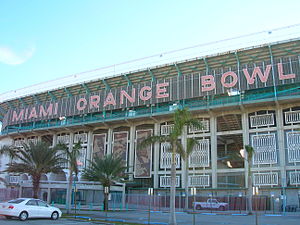 Historically, the Hurricanes are one of the most predominant college football programs in the nation. They have won five Division I national football championships (1983, 1987, 1989, 1991, and 2001), and are currently ranked fourth on the list of all-time Associated Press National Poll Championships, behind Notre Dame, Oklahoma and Alabama.[21]

As of the 2011 National Football League season, UM had the most players active in the NFL of any university in the nation, with 42.[22]

In July 2009, Andrew Carter, a former assistant coach at Clemson University, was selected as head rowing coach at UM. Carter has over 20 years of experience coaching at the collegiate and international levels. Marc DeRose was hired as assistant coach.[24]

Miami added a soccer team in 1957. It offered scholarships from the beginning by phasing in 3 scholarships per year over a four-year period. The Cobb Stadium for Soccer, Track and Field was built on the Coral Gables campus in 1998 for the program. 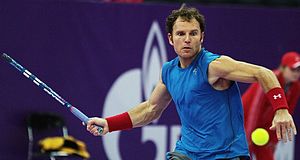 Michael Russell played number one singles for the University of Miami in 1996–97.[27] He was named 1997 NCAA Rookie of the Year and an All American, and finished No. 7 in collegiate rankings (and No. 1 among freshmen).[15][27][28][29] His 39 singles match wins were a school record, and he was the first freshman since 1986 to win the Rolex National Intercollegiate Indoor Championships, defeating Fred Niemeyer in the final.[15] He was also named to the 1997 Rolex Collegiate All-Star Team, selected by the Intercollegiate Tennis Association and Tennis Magazine, and the Big East Championship Most Outstanding Player.[30]

As of 2009[update], Kevin Ludwig was the head coach, and there were 9 men[31] and 7 women on the tennis team.[32] The men's team is coached by Mario Rincon, and women's team by Paige Yaroshuk-Tews.

In July 2008, Mike Ward, who served for five years as an assistant and 11 years as head coach in the University of Miami's track and cross country programs, retired.[33] Amy Deem, who had been the women's coach for 17 years became the Director of Track and Field/Cross Country.[15] Perhaps UM's most notable athlete is Lauryn Williams '04, who earned nine All-American honors. Internationally, Williams won the silver medal at the 2004 Athens Olympics, gold at the 2005 World Championships in Athletics, and finished 5th at the 2009 World Championships in Athletics.,[34] all in the 100m dash. The team plays its home games at Cobb Stadium on the University of Miami's Coral Gables campus.

UM has sponsored other varsity sports in the past. The University of Miami polo team was undefeated in tournament play from 1948–1951. However, the games were poorly attended and the program ran a $15,000 deficit in 1950. The sport was dropped the following year.[26] Boxing was one of the most popular and successful athletic programs on campus through the 1950s. Varsity boxing matches attracted sizeable crowds.[36]

Below are 16 national team titles that were not bestowed by the NCAA:

The Miami Hurricanes most recent (2013) overall program Graduation Success Rate (GSR) of 92 percent, according to the rates released by the NCAA. Miami's GSR is tied for third among ACC schools and 10th overall among FBS programs. UM has exceeded the NCAA average GSR in each of the last nine years. In 2012, Miami set a school-record with a 93 percent GSR, a year after (2011) establishing a then-record at 89 percent. Eight teams compiled GSR marks of 100 percent. Men's diving and golf each posted their ninth consecutive perfect marks, while women's tennis recorded its sixth straight GSR score of 100 percent. Baseball, women's track & field / cross country, rowing, women's swimming and volleyball also tallied perfect GSR scores. It was volleyball's third straight year with a perfect GSR; rowing and women's swimming posted perfect scores for the second straight year.[38]

The University of Miami, as articulated by its former president Donna Shalala, has been very supportive of achieving gender equity and complying with Title IX. Shalala wrote of her support in a Miami Herald column on the 30th anniversary of that law.[39] However, in the past, female athletes filed complaints with the federal government in the 1970s and 1980s alleging unequal funding and facilities for UM women's sports.[40]

Some critics of Miami's allocation of fiscal resources within the Athletics Department have blamed the decision to drop certain men's teams on Title IX compliance.[43][44][45]

The University of Miami Sports Hall of Fame[46] is located next to the Hecht Athletic Center on campus. It houses many artifacts and memorabilia from the Hurricanes' athletic teams over the last 80 years. Each year, the Hall of Fame inducts former athletes who have been out of school at least 10 years, or coaches and administrators, in an annual banquet.

Since its inception in 1966, the UMSHoF has inducted over 250 or the greatest student-athletes who have worn the Orange, Green and White.