The Miami Marlins are an American professional baseball team based in Miami, Florida. The Marlins are a member of the National League (NL) East division in Major League Baseball (MLB). Their home park is Marlins Park. Though one of only two MLB franchises to have never won a divisional title (with the Colorado Rockies) the Marlins have won two World Series championships as a Wild Card.

The team began play in the 1993 season as the Florida Marlins. They played home games from their inaugural season to the 2011 season at Sun Life Stadium, which they shared with the Miami Dolphins of the National Football League (NFL). Sun Life Stadium was also called Joe Robbie Stadium, Pro Player Park, Pro Player Stadium, Dolphin Stadium, Dolphins Stadium, and Land Shark Stadium during their tenancy. Since the 2012 season, they have played at Marlins Park in downtown Miami, on the site of the former Orange Bowl in Little Havana, Florida. The new park, unlike Sun Life Stadium (which was criticized in its baseball configuration for poor sight lines in some locations), was designed foremost as a baseball park. The new park's name is a temporary one until naming rights are purchased.[3][4] Per agreement with the city and Miami-Dade County (which owns the park), the Marlins officially changed their name to the "Miami Marlins" on November 11, 2011.[5] They also adopted a new logo, color scheme, and uniforms.

The Marlins have the distinction of winning a World Series championship in both seasons they qualified for the postseason, doing so in 1997 and 2003 — both times as the National League wild card team. They defeated the American League (AL) champion Cleveland Indians in the 1997 World Series, which was notable for shortstop Edgar Rentería driving in second baseman Craig Counsell for the series-clinching run in the 11th inning of the seventh and deciding game. The 2003 season was notable for the firing of manager Jeff Torborg after 38 games. The Marlins were in last place in the NL East with a 16–22 record at the time. Torborg's successor, 72-year-old Jack McKeon, led them to the NL wild card berth in the postseason; they defeated the New York Yankees four games to two in the 2003 World Series.

Wayne Huizenga, CEO of Blockbuster Entertainment Corporation, was awarded an expansion franchise in the National League (NL) for a $95 million expansion fee and the team began operations in 1993 as the Florida Marlins.

The Marlins would qualify for the postseason and win the World Series in both 1997 and 2003, though both titles were followed by controversial periods where the team sold off all the high priced players and rebuilt.

The Marlins moved into their new ballpark, Marlins Park in 2012, which coincided with a change in the team colors/uniforms and name to the Miami Marlins.

From 1993 until 2011, the Marlins had retired the number 5 in honor of Carl Barger, the first president of the Florida Marlins who died prior to the team's inaugural season. Barger's favorite player was Joe DiMaggio, thus the selection of number 5. With the move to the new ballpark, the team opted to honor Barger with a plaque. The team opened up number 5 for use on February 11, 2012. Logan Morrison, a Kansas City native and fan of Royals Hall-of-Famer George Brett (who wore that number with the Royals), became the first Marlin to wear the number.[6]

The Marlins began construction of a new, state-of-the-art stadium at the Miami Orange Bowl site on July 18, 2009. The now approved stadium was the subject of a protracted legal battle. A lawsuit by local automobile franchise mogul and former Philadelphia Eagles owner Norman Braman contested the legality of the deal with Miami-Dade County and the City of Miami. However, Miami-Dade County Judge Beth Cohen dismissed all the charges in Braman's lawsuit.

The seating capacity for Marlins Park is 36,742, making it the third smallest stadium (in capacity) in the MLB. Its first regular season game was April 4, 2012, against the St. Louis Cardinals, the ballpark became only the sixth MLB stadium to have a retractable roof, joining Rogers Centre in Toronto (1989), Chase Field in Phoenix (1998), Safeco Field in Seattle (1999), Minute Maid Park in Houston (2000), and Miller Park in Milwaukee (2001).

As part of the new stadium agreement, the team renamed itself the Miami Marlins on November 11, 2011 along with the unveiling of new uniforms and team logo in time for the move to the new stadium in 2012.

Until a naming-rights deal is reached, the park will be known as Marlins Park.

The Marlins' flagship radio station from their inception in 1993 through 2007 was WQAM 560 AM. Although the Marlins had plans to leave WQAM after 2006, they ultimately remained with WQAM for the 2007 season. On October 11, 2007, it was announced that the Marlins had entered into a partnership with WAXY 790 AM to broadcast all games for the 2008 season. Longtime Montreal Expo and current Marlins play-by-play radio announcer Dave Van Horne won the Hall of Fame's Ford C. Frick Award for excellence in baseball broadcasting in 2010.[7] He shares the play-by-play duties with Glenn Geffner.

Games are also broadcast in Spanish on Radio Mambi 710 AM. Felo Ramírez, who calls play-by-play on that station along with Luis Quintana, won the Ford C. Frick Award from the National Baseball Hall of Fame in 2005.

Marlins games are televised by Fox Sports Florida. FS Florida's slogan in 2008 was "You Gotta Be Here." For the 2009 season the new slogan is "It's where you wanna be." There are no games available over-the-air, with the exception of games broadcast on Fox Saturday Baseball; the last "free TV" broadcast of a game was on WPXM-TV in 2005. Rich Waltz is the play-by-play announcer and Tommy Hutton is the color analyst. 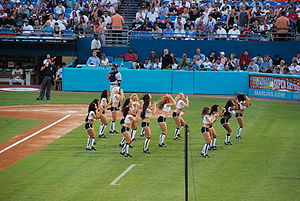 In 1989, the release of popular movie Back to the Future Part II, had a reference to the Chicago Cubs defeating a baseball team from Miami in the 2015 World Series, ending the longest championship drought in all four of the major North American professional sports leagues.[8]

In 2008, the Florida Marlins debuted "The Marlins Manatees", Major League Baseball's first ever all-male dance/energy squad to star alongside the Mermaids.[citation needed]

As of 2012, the Marlins have abandoned the "Mermaids" and "Manatees" for in-game entertainment instead using an "energy squad", a co-ed group of dancers.[9]

In June 2013, the book, "The Forgotten Marlins" A Tribute to the 1956–1960 Original Miami Marlins" was published. Its author is Sam Zygner (published by Scarecrow Press).

The following are the five best seasons in Marlins' history:

The following are the five worst seasons in Marlins' history:

Other than their first few years as a franchise in the 1990s, the Marlins have consistently ranked as one of lowest attendance teams in the league, coming in last place (30th) several of the past 20 years. Even when the new stadium was completed for the 2012 season, attendance was only average for the first year, dropping down to second to last by 2013.

The annual financial records of the Marlins according to Forbes since 2001.[16]