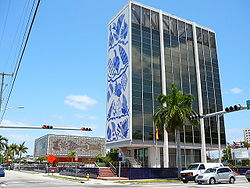 The Bacardi Building, built in 1963 in Edgewater,[1] is an example of MiMo architecture.

Miami Modernist architecture or MiMo, is a regional style of architecture that developed in South Florida during the post-war period. The style was Internationally recognized as a regionalist response to the International Style and its origins can be found in most of the larger Miami and Miami Beach resorts built after the great depression. Because MiMo styling was a not just a response to international architectural movements but also client demands, themes of glamour, fun, and material excess to otherwise stark, minimalist, and efficient styles of the era became rooted. The style can be most-observed today in Middle and Upper Miami Beach along Collins Avenue, as well as, along the Biscayne Boulevard corridor starting from around Midtown, through the Design District and into the Upper Eastside.

The term MiMo has only recently been associated with the style. Popularity of the term is credited to Miami Beach resident Randall C. Robinson and interior designer Teri D'Amico. Principal examples of MiMo include the Fontainebleau Hotel, Eden Roc, Seacoast Towers, Deauville, and Di Lido hotels by famed architect Morris Lapidus, Norman Giller's Carillon Hotel which was voted Miami Beach's "Hotel of the Year" in 1959, and the original Diplomat Hotel in Hollywood, Florida.

To some degree, Miami developed the style through its rapid accumulation of younger architects immediately after the war, who were more closely aligned with media promotions and sensationalism than older architects of the era. The region successfully transposed its resort styling to a national audience who was easily captivated by the area’s relative exoticism.[2]

The name is an acronym for Miami Modern Architecture. There are many examples of the architecture within the district.