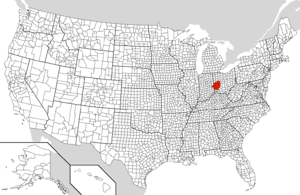 Location of the Miami Valley

The Miami Valley, broadly, refers to the land area surrounding the Great Miami River in southwest Ohio, USA, and also includes the Little Miami, Mad, and Stillwater rivers as well. Geographically, it includes Dayton, Springfield, Middletown, Hamilton, and other communities.

Most commonly, however, it refers to the economic and cultural-social region centered primarily on Dayton and the Greater Dayton area, including TV and radio markets. Middletown and Hamilton both fall under the economic and cultural-social influence of Cincinnati and thus, do not commonly use the term in this sense. Institutions and enterprises in the Dayton area, such as Miami Valley Career Technology Center, Miami Valley Hospital,[1] Miami Valley Council of the Boy Scouts of America[2] and Miami Valley Storytellers,[3] as well as Upper Valley Medical Center (Troy),[4] illustrate local usage. 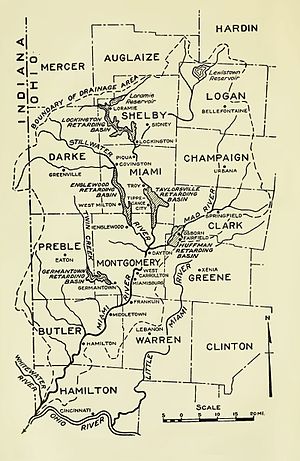 Additionally, WHIO includes the following locations in its news and weather coverage:

According to an article in the Dayton Daily News, as Greater Cincinnati grows northward through Butler County, it could conceivably merge with Greater Dayton by 2017-2020, thereby virtually erasing any distinguishable boundary between the two current Combined Statistical Areas (CSA). As a result, the US Census Bureau could begin reporting the Cincinnati and Dayton metropolitan areas as one by that time, though it would be up to the U.S. Office of Management and Budget to make the merger decision. The new Cincinnati-Dayton metropolitan area would be comparable in size to that of the Orlando-Deltona-Daytona Beach, FL CSA and place it within the top 20 most populous metros in the US, with a population of nearly 3.0 million.[5]

There are two large health networks that operate in the Miami Valley: Premier Health and Kettering Health Network.