Michael Andrew Foster Jude Kerr, 13th Marquess of Lothian, Baron Kerr of Monteviot, PC, QC, DL (born 7 July 1945), previously known as Michael Ancram, is a British Conservative Party politician. A member of the House of Lords, he was formerly a Member of Parliament (MP) and a member of the Shadow Cabinet. Lord Lothian is hereditary Chief of the Scottish Clan Kerr.[1]

Michael Ancram was born in London and is the elder son and second child of the 12th Marquess of Lothian.[2] He was educated at the Catholic independent school Ampleforth College in North Yorkshire, followed by Christ Church at the University of Oxford (BA History 1966 proceeded MA), where he was a member of the Bullingdon Club,[3] and the University of Edinburgh (LLB 1968).

Ancram unsuccessfully contested the West Lothian parliamentary seat in 1970. He was first elected to Parliament in the February 1974 general election, when he contested and won the seat of Berwickshire and East Lothian, but lost the seat in the October election of the same year. He re-entered Parliament at the 1979 election as the Member of Parliament for Edinburgh South, beating future Prime Minister Gordon Brown. He lost his seat again at the 1987 general election, but returned to Parliament at the 1992 election representing Devizes.

He was a member of the House of Commons Energy Select Committee between 1979 and 1983, and Chairman of the Scottish Conservative and Unionist Party from 1980 to 1983. He was Parliamentary Under-Secretary of State at the Scottish Office with responsibility for Home Affairs, Housing, Local Government, Rating Reform and the Environment from 1983 until 1987.

He lost his seat in 1987 but returned to Parliament in 1992 and was a member of the Public Accounts Committee and Chairman of the backbench Constitutional Affairs Committee from 1992 until May 1993, when he was appointed Parliamentary Under-Secretary of State at the Northern Ireland Office. He was promoted to Minister of State at the Northern Ireland Office in January 1994, and was sworn as a Privy Councillor in January 1996.

After the Conservatives' defeat at the 1997 election he served in the Shadow Cabinet as Constitutional Affairs Spokesman from June 1997 to June 1998, and as Chairman of the Conservative Party from October 1998 to September 2001.

In 2001, he ran against Iain Duncan Smith, Michael Portillo, Kenneth Clarke and David Davis in the election for the party leadership. In the first poll of Conservative MPs he and David Davis were tied for last place, leading to a re-run in which Ancram was placed bottom. He was eliminated, and Davis withdrew. Both swung their support behind Iain Duncan Smith, who went on to win, beating Clarke in the final vote of party members. Duncan Smith made Ancram Deputy Leader of the Opposition and Shadow Secretary of State for Foreign and Commonwealth Affairs in September 2001. He remained in this position after Michael Howard took over in 2003.

In the reshuffle following the 2005 election, Ancram was moved to Shadow Secretary of State for Defence but remained Deputy Leader. He stood down from the Shadow Cabinet in December 2005, following the election of David Cameron as Conservative Party Leader.[6] In January 2006 he was appointed to the Intelligence and Security Committee, replacing James Arbuthnot.

Later years as an MP

Ancram was a founding signatory in 2005 of the Henry Jackson Society principles, advocating a proactive approach to the spread of liberal democracy across the world, including when necessary by military intervention. On 21 April 2006 he became one of the first senior Conservative MPs to call for British troops to withdraw from Iraq, saying Iraq was effectively in a state of civil war and that "It is time now for us to get out of Iraq with dignity and honour while we still can."[7]

Ancram is a founder member of the Top Level Group of UK Parliamentarians for Multilateral Nuclear Disarmament and Non-proliferation,[8] established in October 2009.

In 2006 he set up the Global Strategy Forum, a bi-partisan foreign affairs think tank based in London.

On 11 August 2009, Ancram announced that he was to stand down as the MP for Devizes at the 2010 general election due to heart problems.[9] He retired when Parliament was dissolved on 12 April 2010; his successor as Conservative member for the Devizes constituency is Claire Perry.[10]

He married Lady Jane Fitzalan-Howard, the youngest daughter of the 16th Duke of Norfolk. They are both prominent Roman Catholics. She is a Patron of the Right to Life Trust[11] and also a Patroness of the Royal Caledonian Ball.[12]

The Marquess and Marchioness of Lothian (as now formally styled) have two daughters:

As the Kerr family titles cannot pass through the female line, the heir presumptive to his hereditary titles is his younger brother Lord Ralph Kerr. However, his elder daughter is heir presumptive to Lady Herries of Terregles, in succession to her childless aunt and mother. Lord Lothian is also one of the five co-heirs to the Barony of Butler, abeyant since 1905. Though the most junior heir by primogeniture, he holds the strongest claim, as the other heirs have a lesser share to that title. Upon his death, however (and assuming the barony of Butler is not called out of abeyance), his own share will be further subdivided between his two daughters.

Lord Lothian is a keen country music fan and has often played acoustic guitar at Conservative Party conferences.[13] He is a knight of Order of St John and Order of St Lazarus, He was also made a Freeman of Gibraltar in 2010. [14] [15] 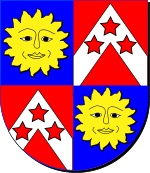 Marquess of Lothian's coat of arms

Although his family name is Kerr, Michael Ancram was known from birth by the courtesy title Earl of Ancram as elder son and heir of the 12th Marquess of Lothian. He is said to have dropped the use of this title in favour of plain Mr Michael Ancram after becoming a lawyer, supposedly because he believed it might confuse the jury if any Judge were to have addressed him as "My Lord".[16]

Ancram is known to many of his friends as Crumb, a nickname attributed to a party in the sixties at which on arrival Ancram introduced himself as "Lord Ancram" and was duly announced as "Mr Norman Crumb".[2]

Ancram became Marquess of Lothian upon his father's death in 2004, but did not take up use of this title in public life whilst still sitting as an MP (although properly he should have ceased being styled by the courtesy title of Earl of Ancram). The House of Lords Act 1999 meant that, on acceding to the peerage, he was not disqualified from sitting in the House of Commons as hereditary peers no longer have an automatic right to sit in the House of Lords. Apart from Irish peers, he was, after John Sinclair, 3rd Viscount Thurso and Douglas Hogg, 3rd Viscount Hailsham, the third person to have sat in the House of Commons while simultaneously being a hereditary peer.

Ancram was created a Life Peer on 22 November 2010 as Baron Kerr of Monteviot, of Monteviot in Roxburghshire, and was introduced in the House of Lords the same day;[17] by custom, he is referred to by his senior title as The Marquess of Lothian during all parliamentary business and in other official records such as Hansard.[18]