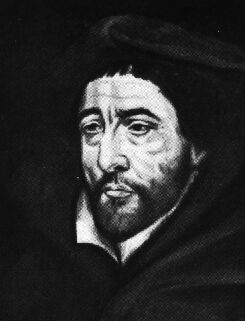 He was born at Meslin L'Eveque near Ath in Hainaut as Michel De Bay. Educated at the Catholic University of Leuven, he studied philosophy and theology with distinguished success, and was rewarded by a series of academic appointments. In 1552 Charles V, Holy Roman Emperor, appointed him professor of scriptural interpretation in the university. In 1563 he was nominated one of the Belgian representatives at the Council of Trent, but arrived too late to take an important part in its deliberations.[2] Indeed, there was resistance to his presence at the Council, and was allowed to attend only under the auspices of the King of Spain. The Council Fathers looked upon him with not a little suspicion. At Leuven, however, he obtained a great name as a leader in the anti-scholastic reaction of the 16th century. The champions of this reaction fought under the banner of Augustine of Hippo though paradoxically undermined Augustine's doctrine of grace; as a result, Baius' heterodox-Augustinian predilections brought him into conflict with Rome on questions of grace, free-will and the like.[2] In various respects, Baius was rightly seen as Pelagian. In 1567 Pope Pius V condemned seventy-nine propositions from his writings in the papal bull Ex omnibus afflictionibus.[3] To this Baius submitted; though certain indiscreet utterances on the part of himself and his supporters led to a renewal of the condemnation in 1579 by Pope Gregory XIII. Baius, however, was allowed to retain his professorship, and even became chancellor of Leuven in 1575.[2]

He died, still holding these two offices, in 1589. His writings are described by Adolf Harnack as a curious mixture of Catholic orthodoxy and unconscious tendencies to Protestantism. His principal works were published in a collected form at Cologne, 1696; some large treatises were excluded. There is a study of both books and author by Linsenmann, Michael Baius und die Grundlegung des Jansenismus, published at Tübingen in 1867.[2] Baius is often seen in his relation to the latter movement of Jansenism and the Port-Royal theologians such as Blaise Pascal.[by whom?]

Henri de Lubac, Augustinianism and Modern Theology (Herder & Herder) ISBN 0-8245-1802-0 This has a treatment of Baius's theology, especially his interpretations of Augustine and his relationship to Jansenius and Jansenism.