Duncan was born in Chicago, Illinois, and grew up in a single-parent household with his sister, Judy, and mother, Jean Duncan (a house cleaner), after his father left.[1][2] He always wanted to act, but had to drop out of the Communications program at Alcorn State University to support his family when his mother became ill. Duncan's large frame—6 feet 5 inches (196 cm)[3] and 315 pounds (142 kg)—helped him in his jobs digging ditches for the People's Gas Company and being a bouncer at several Chicago clubs.[4] Duncan also played basketball at Kankakee Community College and for one season at Alcorn State.[5]

In 1979, he participated in the Disco Demolition Night at Comiskey Park, home of the Chicago White Sox, where he was among the first 100 people to run onto the field and he slid into third base. During the ensuing riot his silver belt buckle was stolen[6] while he was stealing a baseball bat from the dugout.[7]

Duncan took other security jobs while in Los Angeles while trying to get some acting work in commercials. During this time, he worked as a bodyguard for celebrities like Will Smith, Martin Lawrence, Jamie Foxx, LL Cool J, and The Notorious B.I.G., all the while doing bit parts in television and films. When rapper Notorious B.I.G. was killed in 1997, Duncan quit the personal-protection business.[3]

After having begun his career with several bit parts playing bouncers in films such as Bulworth and A Night at the Roxbury, Duncan first came to prominence when he was cast as Bear in the blockbuster Michael Bay action film Armageddon (1998). During the production of the film, Duncan struck up a friendship with castmate Bruce Willis and it was Willis' influence that helped him to get his breakout role as gentle giant John Coffey in the Frank Darabont film The Green Mile (1999). Starring alongside Tom Hanks, Duncan's acclaimed performance netted him an Academy Award nomination for Best Actor in a Supporting Role and a Golden Globe nomination for Best Performance by an Actor in a Supporting Role in a Motion Picture.[8][9]

Following his iconic dramatic turn as Coffey, Duncan was then cast in a string of films that helped to establish him as a star adept at both action and comedy: The Whole Nine Yards (2000), Planet of the Apes (2001), The Scorpion King (2002) (where he starred alongside his friend, The Rock), and Daredevil (2003) (reuniting him with Armageddon co-star Ben Affleck) as Wilson Fisk, aka The Kingpin from Marvel Comics.

When Duncan was cast as the Kingpin in 2002,[10] he faced the dual challenge of portraying a typically white character[11][12] and having to gain 40 pounds to fit the character's large physique. In July 2006, Duncan showed interest in returning for the role of the Kingpin, but stated that he would not be willing to regain the weight that he had lost.[13] In 2009, he stopped eating meat and later appeared in a PETA ad campaign, touting the health benefits and his increased strength from a vegetarian diet.[14][15]

In 2005, Duncan appeared in two prominent action films, The Island (his second Michael Bay Film) and Sin City (again alongside Bruce Willis) where he played Manute, a powerful mobster. Critic Roger Ebert singled out Duncan for praise for his role in The Island, writing that "[Duncan] has only three or four scenes, but they're of central importance, and he brings true horror to them."[16] Duncan appeared in a supporting role in the 2006 comedy Talladega Nights: The Ballad of Ricky Bobby as Lucius Washington and, in 2009, Duncan played Balrog in Street Fighter: The Legend of Chun-Li and starred as the titular Cleon "Slammin'" Salmon in Broken Lizard's farce The Slammin' Salmon.

Famous for his deep, resonant voice, Duncan also did speaking-only roles for films such as Brother Bear (2003) and its sequel, Brother Bear 2, Kung Fu Panda (2008) and Green Lantern (2011) playing the voice of Kilowog from DC Comics alongside Ryan Reynolds.

His other voice acting roles include' TV series such as Loonatics Unleased and Operation: Z.E.R.O., Quiznos commercials, and a number of video games such as Demon Stone, SOCOM II: U.S. Navy SEALs, The Suffering: Ties That Bind, Saints Row, Soldier of Fortune, and God of War II, where he provided the voice of the Titan Atlas. He additionally reprised his role as the Kingpin in Spider-Man: The New Animated Series.

In addition to his film roles, Duncan also guest starred in numerous television shows. Among these, he appeared in an episode of The Suite Life of Zack & Cody and a first-season episode of CSI: NY.[17] In 2008, he appeared as "Mr. Colt" in the second-season premiere of Chuck, "Chuck Versus the First Date"[18] and as a guest star on two episodes of Two and a Half Men. Most notably, in April 2011, Duncan guest starred on an episode of TV series Bones as Leo Knox which, in 2012, led to Duncan receiving his first starring role as the same character in the spinoff series The Finder. The Bones Season 8 episode "The Partners in the Divorce", which aired three weeks after his death, was dedicated to him.

During the week of May 14, 2012, Duncan appeared as a guest on the late night talk show The Late Late Show with Craig Ferguson when the show was taping for a week in Scotland. Duncan was one of the show's most frequent guests, appearing a total of 18 times, and, the day after Duncan's death in September, Ferguson began his show with a tribute to him. In January 2013 during The Late Late Show's winter break, reruns of the Scotland episodes were broadcast with a tribute to Duncan at the beginning of each of the five episodes, featuring Duncan on a pink background and the text "In memory of our friend Michael Clarke Duncan."

At the time of his death, Duncan was engaged to reality television personality Omarosa Manigault.[19]

In 2013, Manigault appeared in the cast of The All-Star Celebrity Apprentice and played in Duncan's honor for his favorite charity and one he had benefited from himself, the Sue Duncan Children's Center. In episode 2 of the season, Manigault won $40,000 for the charity.[20] 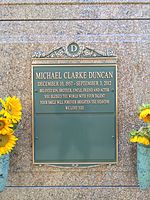 On July 13, 2012, Duncan was taken to Cedars Sinai Medical Center after suffering a heart attack.[21] Media reports suggested that his girlfriend, Omarosa Manigault, had tried to save his life by performing CPR.[22] Duncan's publicist, Joy Fehily, issued a statement on August 6 that read he was moved from the intensive-care unit but remained hospitalized following his heart attack.[23] On September 3, Duncan died in Los Angeles. Celebrations of Duncan's life were scheduled for a later date.[24]