Born at Portugal Street in London, Hicks Beach was the son of Sir Michael Hicks Beach, 8th Baronet, of Beverston, and his wife Harriett Vittoria, second daughter of John Stratton.[1] He was educated at Eton College and Christ Church, Oxford, where he graduated with a first class degree in the School of Law and Modern History in 1858. In 1854 he succeeded his father as ninth Baronet.[1]

In 1864 he was returned to Parliament as a Conservative for East Gloucestershire.[2] During 1868 he acted both as Parliamentary Secretary to the Poor Law Board and as Under-Secretary of State for Home Affairs. In 1874 he was made Chief Secretary for Ireland, and was included in the Cabinet in 1877. From 1878 to 1880 he was Secretary of State for the Colonies. In 1885 he was elected for Bristol West,[3] and became Chancellor of the Exchequer and Leader of the House of Commons. After Gladstone's brief Home Rule Ministry in 1886 Hicks Beach entered Lord Salisbury's next Cabinet again as Irish Secretary, making way for Lord Randolph Churchill as Leader of the House; but troubles with his eyesight compelled him to resign in 1887. 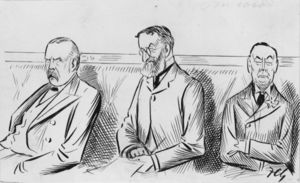 From 1888 to 1892 Hicks Beach returned to active work as President of the Board of Trade, and in 1895, Goschen being transferred to the Admiralty, he again became Chancellor of the Exchequer. In 1899 he lowered the fixed charge for the National Debt from twenty-five to twenty-three million, a reduction imperatively required, apart from other reasons, by the difficulties found in redeeming Consols at their then inflated price. When compelled to find means for financing the war in South Africa, he insisted on combining the raising of loans with the imposition of fresh taxation; and besides raising the income-tax each year, he introduced taxes on sugar and exported coal (1901), and in 1902 reimposed the registration duty on corn and flour which had been abolished in 1869 by Lowe. The sale of his Netheravon estates in Wiltshire to the War Office in 1898 occasioned some acrid criticism concerning the valuation, for which, however, Sir Michael himself was not responsible. On Lord Salisbury's retirement in 1902 Hicks Beach also left the government. 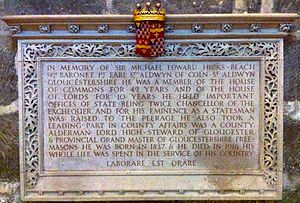 His second daughter, Susan Hicks Beach (1878-1965), was the sitter representing Britannia on the reverse of the Edward VII silver florins (two shilling pieces) issued from 1902 to 1910 and designed by George William de Saulles. She chose the single life residing with her mother for sundry years subsequent to Word War II cultivating and caring for the family lands in the Cotswolds.

Lord St Aldwyn died in April 1916, aged 78, only a week after his son was killed in action in the First World War, and was succeeded in his titles by his grandson Michael, who also became a Conservative politician. Lucy, The Countess St Aldwyn had been involved with Elizabeth Malleson in the creating of a Rural Nursing Association in the 1880s. This organisation was successful and incorporated in similar initiatives by Queen Victoria.[6] The countess died in March 1940. The coastal town of Beachport in the Australian state of South Australia was named after Lord St Aldwyn in 1878.