Michael came from a family of Paphlagonian peasants, one of whom, the parakoimomenos John the Orphanotrophos, had come to preside over the woman's quarters at the imperial palace.[2] John brought his younger brothers into the court and there the empress Zoe became enamoured of the youngest, Michael, who became her chamberlain in 1033. Prior to his court appointment, Michael was originally a money-changer,[1] but it was believed that he was also secretly a forger of false coins.[3]

The two soon became lovers.[4] Zoe flaunted Michael openly, and spoke about making him emperor. Hearing the rumours, Romanos was concerned and confronted Michael,[3] but he denied the accusations, swearing his innocence on some holy relics.[5] Then, on April 11, 1034, Zoe’s husband, Romanos III was found dead in his bath.[4] Rumours soon began circulating that Zoe and Michael had decided to use a slow poison to kill him.[6] However, becoming impatient with the poison Michael had had him strangled or drowned.[7][8] Adding weight to the rumours was the speed with which Zoe and Michael were married, on the very day that Romanos III died.[4]

The next day, April 12, 1034, the couple summoned the Patriarch Alexios I to officiate in the coronation of the new emperor.[9] Although he initially refused to co-operate, the payment of 50 pounds of gold helped change his mind.[4] He proceeded to crown Michael IV as the new emperor of the Romans.[6][10]

Michael IV was handsome, clever, and generous, but he was uneducated and suffered from epileptic fits.[11] This meant he was initially very reliant upon someone to direct the government in his name, and although Zoe believed Michael would prove to be a more devoted husband than Romanos, she was sadly mistaken. Michael IV was concerned about Zoe turning on him the way she had turned on Romanos,[12] and so he excluded Zoe from politics altogether. Given this background and his health status, he proceeded to leave the government in the hands of his brother John, who had already become an influential minister under Constantine VIII and Romanos III.[13] Zoe was confined to the palace gynaeceum, and kept under strict surveillance,[12] while Michael’s visits grew more and more infrequent.[14] 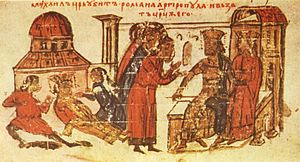 Murder of emperor Romanos III Argyros under the order of Michael IV the Paphlagonian, from the Constantine Manasses Chronicle

John's reforms of the army and financial system revived for a while the strength of the Empire, which held its own successfully against its foreign enemies.[15] But the increase in taxation caused discontent among both nobles and commoners.[16] John's monopoly of the government, and his policies, such as the introduction of the Aerikon tax, led to several failed conspiracies against him, and, by extension, Michael.[1][16] There were local revolts at Antioch, Nicopolis and Bulgaria.[17] Local discontent was exacerbated by poor harvests and famine caused by bad weather and a locust plague in 1035,[6] and when Michael tried to exercise a measure of control over Aleppo, the local citizens drove off the imperial governor.[18]

In 1034, Constantine Dalassenos was arrested by Michael on suspicion of treason, accused of fomenting insurrection at Antioch.[15] In 1037, Zoe was involved in a conspiracy to have John the Eunuch poisoned.[4] In 1038, there was an uprising in the armies in Anatolia, which was suppressed by Michael’s brother, Constantine.[15] In 1040, there was a conspiracy involving the patrician Michael Keroularios, who became a monk to save his life and was later elected as Patriarch of Constantinople.[15] Finally, during the Bulgarian uprising of 1040, John the Eunuch was forced to arrest suspected plotters in Anatolia and Constantinople who were hoping to take advantage of the turmoil.[19] He was unable to capture the Strategos of Theodosiopolis[disambiguation needed], who joined the rebellion and attempted to capture Thessalonica.[19]

In military affairs, Michael's reign began badly. The Arabs sacked Myra, the Serbs had thrown off Byzantine authority, and the Pechenegs were raiding almost at will up to the gates of Thessalonica.[6] Yet the situation was soon stabilised; by 1035, on the eastern frontier, Arab pirates who had been raiding were either captured or killed, the Byzantines had taken the Muslim fortress of Berkri, on the eastern shore of Lake Van,[18] while the important fortress of Edessa was relieved after a prolonged siege[20] and eventually ceded back to the empire in 1037.[18]

On the western front, in Sicily, Michael and John ordered the general George Maniakes to drive the Arabs out of the island.[21] Beginning in 1038,[18] Maniakes landed in southern Italy and soon had captured Messina. He then began defeating the scattered Arab forces and taking towns in the west and south of the island, almost succeeding in driving the Arabs from the island.[18] By 1040, he had stormed and taken Syracuse.[19] Maniakes then fell out with his Lombard allies,[22] however, while his Norman mercenaries, unhappy with their pay, abandoned the Byzantine general and raised a revolt on the Italian mainland, resulting in the temporary loss of Bari.[19] Maniakes was about to strike against them when he was recalled by John the Eunuch on suspicion of conspiracy.[19] After the recall of Maniakes most of the Sicilian conquests were lost throughout 1041,[23] and a subsequent expedition against the Normans suffered several defeats, although Bari was recaptured.[23]

In the north, Pecheneg pressure had initially forced the Serbs to seek the protection of the Byzantine Empire and acknowledge Byzantine authority.[18] In 1040, however, the Serbs again revolted,[24] as did the Bulgarians in western Bulgaria and Macedonia in the same year. This uprising was partly caused by the heavy taxation in coin (and not, as before, in kind) imposed on Bulgaria at the time,[25] but it also aimed at the restoration of the Bulgarian state under the leadership of Peter Delyan.[26] The rebels seized Belgrade and proclaimed Peter "Emperor of Bulgaria".[19] The rebels quickly took Skopje. Michael IV made things worse by removing from command the doux of Dyrrhachium, who had been marching against Peter Delyan, accusing him of a conspiracy. His troops, largely Bulgarian, joined the revolt, and Michael IV was chased out of the vicinity of Thessalonica.[19] By now Dyrrhachium was lost, and Peter had not only defeated the strategos of Hellas, but most of the theme of Nicopolis had risen up against Michael, disgusted with the greed of John the Eunuch.[19] Michael, however, returned with an army of 40,000 men in 1041, assisted by Norse mercenaries including the future King Harald III of Norway. Gathering his forces at Mosynopolis, the emperor waited for the Bulgarian army;[18] the military success of the Byzantines was aided by internal dissension among the Bulgarians, and eventually their leaders were defeated and captured.[27] Michael IV returned to Constantinople in triumph, but by now it was obvious that he was dying.[22]

Tonsure and death of Michael IV, as depicted in the Madrid Skylitzes

As early as 1038, Michael's epilepsy had been growing steadily worse, and he developed a severe case of dropsy.[18] He sought heavenly aid by visiting the shrine of Saint Demetrius at Thessalonica and by building or rebuilding churches.[18] In 1039, he gave monetary gifts to every monk and priest in the empire,[19] and also to any parents who made him a godfather to their children,[19] but to no avail. John the Eunuch, eager to ensure that power remained in his hands, forced Zoe to adopt Michael V, the son of Michael IV's sister.[8] After taking Holy Orders,[1] on 10 December 1041 Michael IV died, refusing to the last to see his wife, who begged that she be allowed to see him one more time before he died.[27]