Michael I of Russia

Michael I of Russia (Russian: Михаи́л Фёдорович Рома́нов, Mikhail Fyodorovich Romanov) (22 July [O.S. 12 July] 1596 – 23 July [O.S. 13 July] 1645) became the first Russian Tsar of the house of Romanov after the zemskiy sobor of 1613 elected him to rule the Tsardom of Russia. He was the son of Feodor Nikitich Romanov (later known as Patriarch Filaret) and of Xenia (later known as "the great nun" Martha). He is also a nephew of Feodor I (the last Rurikid Tsar) through his aunt Anastasia Romanovna (his paternal grandfather's sister) and through marriage with Tsar Ivan IV of Russia. His accession marked the end of the Time of Troubles of 1598-1613. 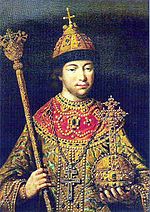 Michael's grandfather, Nikita, was brother to the earlier Tsarina Anastasia and a central advisor to Ivan the Terrible. As a young boy, Michael and his mother had been exiled to Beloozero in 1600. This was a result of the recently elected Tsar Boris Godunov, in 1598, falsely accusing his father, Feodor, of treason. This may have been partly because Feodor had married Ksenia Shestova against Boris' wishes.[1] Michael was unanimously elected Tsar of Russia by a national assembly on 21 February 1613, but the delegates of the council did not discover the young Tsar and his mother at the Ipatiev Monastery near Kostroma until 24 March. He had been chosen after several other options had been removed, including royalty of Poland and Sweden. Initially, Martha protested, believing and stating that her son was too young and tender for so difficult an office, and in such a troublesome time. The weeping boyars solemnly declared that if he persisted in his refusal, they would hold him responsible to God for the destruction of Russia[citation needed]. Michael eventually consented to accept the throne.

Michael's election and accession to the throne form the basis of the Ivan Susanin legend, which Russian composer Mikhail Glinka dramatized in his opera A Life for the Tsar.

In so dilapidated a condition was the capital at this time that Michael had to wait for several weeks at the Troitsa monastery, 75 miles (121 km) off, before decent accommodation could be provided for him at Moscow. He was crowned on 22 July 1613. The first task of the new tsar was to clear the land of the countries occupying it. Sweden and Poland were then dealt with respectively by the peace of Stolbovo (17 February 1617) and the Truce of Deulino (1 December 1618). The most important result of the Truce of Deulino was the return from exile of the tsar's father, who henceforth took over the government till his death in October 1633, Michael occupying quite a subordinate position. 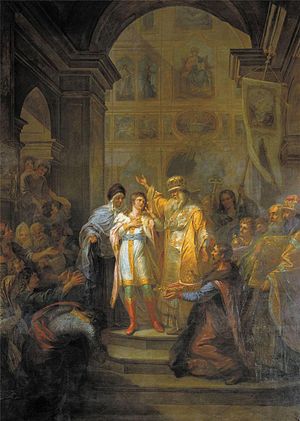 Tsar Michael suffered from a progressive leg injury (a consequence of a horse accident early in his life), which resulted in his not being able to walk towards the end of his life. He was a gentle and pious prince who gave little trouble to anyone and effaced himself behind his counsellors. Sometimes they were relatively honest and capable men like his father; sometimes they were corrupted and bigoted, like the Saltykov relatives of his mother. He was married twice, first to Princess Maria Vladimirovna Dolgorukova in 1624, who died four months after the marriage the next year, and then in 1626 to Eudoxia Streshneva (1608–1645), who brought him 10 children. Michael's failure to wed his daughter Irene of Russia with Count Valdemar Christian of Schleswig-Holstein, a morganatic son of King Christian IV of Denmark, in consequence of the refusal of the latter to accept Orthodoxy, so deeply afflicted him as to contribute to bringing about his death on 12 July 1645.

The two government offices (prikazes) that were most important politically were Posolsky Prikaz ("Foreign Office") and Razryadny Prikaz (a Duma chancellery and a personnel department for both central and provincial administration including military command). Those offices could be pivotal in struggles between Boyar factions, so they were traditionally headed not by Boyars but by dyak (professional clerks).

The first head of the Posolsky Prikaz under Michael was Pyotr Tretyakov until his death in 1618; he conducted policy of allying with Sweden against Poland. The next one, Ivan Gramotin had a reputation of a Poloniphile; this appointment was necessary to bring forth Filaret's release from captivity. In mid-20s Filaret began preparations for war with Poland; Gramotin fell in his disfavour and was fired and exiled in 1626. The same fate was shared by Efim Telepnev in 1630 and Fedor Likhachov in 1631 - they too tried to soothe Filaret's belligerent approach. Ivan Gryazev, appointed in 1632, was promoted from second ranks of bureaucracy to fulfill Filaret's orders. After Filaret's and Gryazev's deaths the post was once again assumed by Gramotin in 1634, and after the latter's retirement in 1635, by Likhachov, with general course on pacification.

Razryadny Prikaz was first headed by Sydavny Vasilyev; Filaret replaced him by his fellow in captivity Tomilo Lugovskoy, but the latter somehow caused Filaret's anger and was exiled. In 1623 Fedor Likhachov was made head of Prikaz till his shift to Posolsky Prikaz, and in 1630 Razryad was given to Ivan Gavrenev, an outstanding administrator who took up this post for 30 years.

Three other strategic offices were Streletsky Prikaz (in charge of streltsy regiments who served as Moscow garrison), Treasury (Prikaz bolshoy kazny), and Aptekarsky Prikaz ("Pharmacy office", in fact ministry of health, most particularly the tsar's health). After Filaret's arrival their former heads were sent away from Moscow, and all three given to Ivan Cherkassky (Filaret's nephew), who proved to be an able and competent administrator and was a de facto prime minister till his death in 1642. Fedor Sheremetev who had succeeded to all Cherkassky's posts was a rather weak figure; the real power was in the hands of a court marshal, Alexey Lvov. 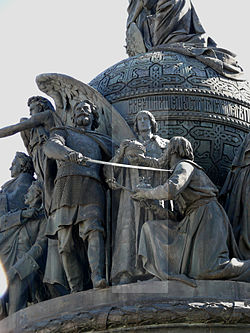 From his marriage to Eudoxia Streshneva, Michael fathered 10 children: