Michael James Jackson (27 March 1942 – 30 August 2007) was an English writer and journalist. He was the author of several influential books about beer and whisky. He was a regular contributor to a number of British broadsheets, particularly The Independent and The Observer.[3]

Jackson's books have sold over three million copies worldwide and have been translated into eighteen different languages.[4] He is credited with helping to start a renaissance of interest in beer and breweries worldwide in the 1970s, particularly in the United States.[5] He is also widely credited with popularising the idea of beer styles.[6] His influential television series The Beer Hunter was shown in fifteen different countries.[7]

He was as equally versed in the world of malt whisky as well as beer, and his book, Michael Jackson's Malt Whisky Companion (1989) is the best-selling book on the subject in the world.[4]

At the time of his death Jackson had been suffering from Parkinson's disease for at least a decade. He did not declare his illness until his symptoms caused some to think he was drunk.[3]

Jackson was born in Wetherby, West Riding of Yorkshire.[8] His father had Anglicised his Lithuanian Jewish surname Jakowitz to Jackson. The family moved to Leeds after the war.[8] He went to King James's Grammar School, Almondbury and became a journalist, particularly being associated with Edinburgh, where he first encountered whisky. On his return to London he briefly edited the advertising trade journal Campaign.

Michael Jackson became known in beer circles in 1977 when his book The World Guide To Beer was first published. This was later translated into more than ten languages and is still considered to be one of the most fundamental books on the subject.[9] The modern theory of beer style is largely derived from this book, in which Jackson categorised a variety of beers from around the world in local style groups suggested by local customs and names.[10]

His work had a special influence on the popularisation of the brewing culture in North America, and he would later around 1990 host a television series entitled The Beer Hunter, which was shown on Channel 4 in the UK and the Discovery Channel. It involved several episodes in which Jackson would visit a different country. Episodes featured beer barrels being lined with pitch or iron foundry workers drinking 'light' beer while they worked in hot conditions to quench thirst, practices which he knew were likely to be ended soon.

Jackson considered beer as a component of culture and described beers in their cultural context. Although he travelled around the world and discovered different beer cultures, he was especially fond of the Belgian beers. He was appointed to an honorary officer of the Ridderschap van de Roerstok in 1997 for his important contribution to the international success of the Belgian beers. This honour had previously only been given to brewers. In 1998, Jackson brought forth his own line of beer glassware. Shortly after, Jackson also helped create and worked with the only beer club he ever endorsed, Michael Jackson's Rare Beer Club.[11] 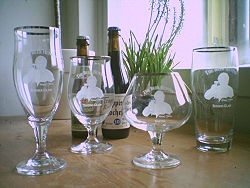 Michael Jackson was also an important reviewer of whiskies. In his book The Malt Whisky Companion, he reviewed a large number of whiskies and gave them marks from 0–100, considering only those with a score above seventy-five worth purchasing. In many ways, his work in the world of whisky exceeded his significance as a beer writer. He was arguably the most important writer on whisky since the Victorian commentator Alfred Barnard and certainly the most significant and influential modern whisky writer. This was recognized by the prestigious award of "Master of the Quaich" and the prodigious sale of his whisky books and sell-out attendances at his tastings. He had enormous influence on the development of single malt whisky globally.[citation needed]

Apart from his work as a journalist and a critic, he was also a great fan of rugby league.

It was revealed in December 2006 that Michael Jackson "is and has been suffering for at least a decade from Parkinson's Disease."[12] He also suffered from diabetes. Michael Jackson died of a heart attack in his home the morning of 30 August 2007 at the age of 65.[13]