Ramsey was born in Cambridge, England in 1904. His parents were Arthur Stanley Ramsey (1867–1954) and Mary Agnes Ramsey (1875–1927); his father was a Congregationalist and mathematician and his mother was a socialist and suffragette. He was educated at Repton School (where the headmaster was another future Archbishop of Canterbury, Geoffrey Francis Fisher), and where author Roald Dahl was a classmate; and Magdalene College, Cambridge, where his father was President of the college. At university he was President of the Cambridge Union Society and his support for the Liberal Party won him praise from H. H. Asquith. His elder brother, Frank P. Ramsey (1903–1930), was a mathematician and philosopher (of atheist convictions) and something of a prodigy, who when only 19 translated into English Wittgenstein's Tractatus.

During his time in Cambridge the young Michael came under the influence of the Anglo-Catholic dean of Corpus Christi College, Edwyn Clement Hoskyns. On the advice of Eric Milner-White he trained at Cuddesdon, where he became friends with Austin Farrer and was introduced to Orthodox Christian ideas by Derwas Chitty.

Ramsey was ordained in 1928 and became a curate in Liverpool, where he was influenced by Charles Raven.

After this he became a lecturer to ordination candidates at the Bishop's Hostel in Lincoln. During this time he published a book, The Gospel and the Catholic Church (1936). He then ministered at St Botolph's Church, Boston and at St Bene't's Church, Cambridge, before being offered a canonry at Durham Cathedral and the Van Mildert Professor of Divinity in the Department of Theology at Durham University. After this, in 1950, he became the Regius Professor of Divinity at Cambridge, but left to become a bishop after only a short in office.[1]

In 1952, he was appointed Bishop of Durham. In 1956 he became Archbishop of York and, in 1961, Archbishop of Canterbury. During his time as archbishop he travelled widely and saw the creation of the General Synod. Retirement ages for clergy were also introduced.

As an Anglo-Catholic with a nonconformist background, Ramsey had a broad religious outlook. He had a particular regard for the Eastern Orthodox concept of "glory", and his favourite book he had written was his 1949 work The Transfiguration. During the J. A. T. Robinson Honest to God controversy, he published a short response entitled Image Old and New, in which he engaged seriously with Robinson's ideas. Conscious always of the atheism which his short-lived brother Frank had espoused, he maintained a lifelong respect for honest unbelief, and considered that such unbelief would not automatically be a barrier to salvation. He also made a barefoot visit to the grave of Mahatma Gandhi. However, he declined to become involved in some inter-faith activities. He disliked the theology of Paul Tillich and although he disagreed with a lot of Karl Barth's thinking, his relations with him were warm.

Following observations of a religious mission at Cambridge, he had an early dislike of evangelists and mass rallies, which he feared relied too much on emotion. This led him to be critical of Billy Graham, although the two later became friends and Ramsey even took to the stage at a Graham rally in Rio de Janeiro. One of his later books, The Charismatic Christ (1973), engaged with the charismatic movement. Ramsey believed there was no decisive theological argument against women priests, although he was not entirely comfortable with this development. The first women priests in the Anglican Communion were ordained during his time as Archbishop of Canterbury and in retirement he received communion from a woman priest in the United States.[citation needed]

Ramsey was active in the ecumenical movement, and while Archbishop of Canterbury in 1966 he met Pope Paul VI in Rome, where the Pope presented him with the episcopal (bishop's) ring he had worn as Archbishop of Milan.[2] These warm relations with Rome caused him to be dogged by protests by Protestants, particularly Ian Paisley. Ramsey also enjoyed friendship with the orthodox Patriarch of Constantinople, Athenagoras, and Alexius, Patriarch of Moscow. His willingness to talk to officially-sanctioned churches in the Eastern Bloc led to criticisms from Richard Wurmbrand. He also supported efforts to unite the Church of England with the Methodist Church, and was disappointed when the plans fell through.

Ramsey disliked the power of the government over the church. His support for liberalising the laws against homosexuality brought him enemies in the House of Lords. Ramsey also created controversy over his call for military action against the Ian Smith regime in Rhodesia, and in his opposition to the Vietnam War.

He opposed curbs on immigration to the UK of Kenyan Asians, which he saw as a betrayal by Britain of a promise. He was also against apartheid, and he left an account of a very frosty encounter with John Vorster. He was also a critic of Augusto Pinochet. Ramsey also opposed the granting of aid money by the World Council of Churches to guerrilla groups. 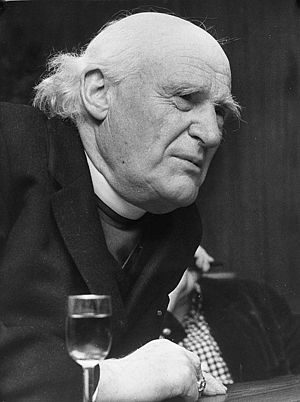 After retiring as Archbishop of Canterbury in 1974 he was created a life peer, as Baron Ramsey of Canterbury, of Canterbury in Kent, enabling him to remain in the House of Lords where he had previously sat as one of the Lords Spiritual. He went to live first at Cuddesdon, where he did not settle particularly well, then for a number of years in Durham, where he was regularly seen in the cathedral and talking to students. But the hills were rather steep for him and he and Lady Ramsey accepted the offer of a flat at Bishopthorpe in York by his successor John Habgood. They stayed there just over a year, moving finally to St John's Home, attached to the All Saints' sisters in Cowley, Oxford, where he died in April 1988.

During his retirement, he also spent several terms at Nashotah House, an Anglo-Catholic seminary of the Episcopal Church in Wisconsin where he was much beloved by students. A first-floor flat was designated "Lambeth West" for his personal use. A stained-glass window in the Chapel bears his image and the same inscription as is on the memorial near his grave. The window also includes a miniature image of the Bishop and his wife Joan (placed in the chapel by the class of 1976 who were among his first students at Nashotah).

Ramsey's funeral was held in Canterbury Cathedral. He was cremated and his ashes buried in the cloister garden at the cathedral, not far from the grave of William Temple. His wife's ashes were also buried there. On the memorial stone are inscribed words from St Irenaeus: "The Glory of God is the living man; And the life of man is the vision of God." A side chapel at Canterbury Cathedral was subsequently dedicated to Ramsey's memory, situated next to a similar memorial chapel to Archbishop Geoffrey Fisher.

Ramsey had no children. His parents and brother are buried in the same grave in the Parish of the Ascension Burial Ground in Cambridge.

Ramsey's name has been given to Ramsey House, a residence of St Chad's College, University of Durham. He was a Fellow and Governor of the college (resident for a period) and he regularly worshipped and presided at the college's daily Eucharist. A building is also named after him at Canterbury Christ Church University. A house at Tenison's School is named in his honour. He also gave his name to the former Archbishop Michael Ramsey Technology College (from September 2007 St Michael and All Angels Church of England Academy) in Farmers' Road, Camberwell, South East London.[5]

In October 2009 it was reported by Maev Kennedy that two divers had found a number of gold and silver items in the River Wear in Durham which were subsequently discovered to have come from Ramsey's personal collection, including items presented to him from dignitaries around the world while he was Archbishop of Canterbury. It is unclear how they came to be in the river. The divers were licensed by the dean and chapter of the cathedral as the owners of the land around the stretch of the river where the items were found. The current legal ownership of the items is yet to be determined. Even before the discovery of the items, the cathedral were planning an exhibition relating to Ramsey's life in 2010 and a new stained glass window dedicated to him[6] by artist Tom Denny.

The two amateur divers, brothers Gary and Trevor Bankhead, found a total of 32 religious artefacts in the River Wear in Durham during a full underwater survey of the area around Prebends Bridge. The underwater survey commenced in April 2007 and took two and half years to complete. The finds were individually handed over to the resident archaeologist from Durham Cathedral to formally record where and when they were found.