Michał Sędziwój (also Michael Sendivogius, Sędzimir or simply Sendivogius; 1566–1636) of Ostoja coat of arms, was a Polish alchemist, philosopher, and medical doctor. A pioneer of chemistry, he developed ways of purification and creation of various acids, metals and other chemical compounds. He discovered that air is not a single substance and contains a life-giving substance-later called oxygen 170 years before similar discoveries by Scheele and Priestley. He correctly identified this 'food of life' with the gas (also oxygen) given off by heating nitre (saltpetre). This substance, the 'central nitre', had a central position in Sendivogius' schema of the universe. 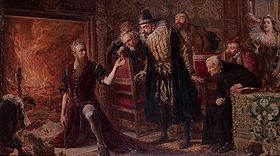 Alchemist Sendivogius - oil on board by Jan Matejko

Little is known of his early life: he was born in a noble family that was part of the Clan of Ostoja. His father sent him to study in university of Kraków but Sendivogius visited also most of the European countries and universities; he studied in Vienna, Altdorf, Leipzig and at Cambridge. His acquaintances included John Dee and Edward Kelley. It was thanks to him that King Stefan Batory agreed to finance their experiments.[1] In the 1590s he was active in Prague, at the famously open-minded court of Rudolf II.

In Poland he appeared at the court of King Sigismund III Vasa around 1600, and quickly achieved great fame, as the Polish king was himself an alchemy enthusiast and even conducted experiments with Sendivogius. In Kraków's Wawel castle, the chamber where his experiments were performed is still intact. The more conservative Polish nobles soon came to dislike him for encouraging the king to expend vast sums of money on chemical experimentation. The more practical aspects of his work in Poland involved the design of mines and metal foundries. His widespread international contacts led to him employment as a diplomat from about 1600.

In his later years, Michael Sendivogius spent more time in Bohemia and Moravia (now in the Czech Republic), where he had been granted lands by the Habsburg emperor. Near the end of his life, he settled in Prague, in the court of Rudolf II, where he gained even more fame as a designer of metal mines and foundries. However the Thirty Years' War of 1618-48 had effectively ended the golden age of alchemy: the rich patrons now spent their money on financing war rather than chemical speculation, and died in relative obscurity.

Daniel Stolcius in his Viridarium Chymicum (1624) praises Sendivogius as the author of twelve books.[2] The most famous of these was his "New Chemical Light", published in 1604. Besides a relatively clear exposition of his theory on the existence of a 'food of life' in air, his books contain various scientific, pseudo-scientific and philosophical theories, and were repeatedly translated and widely read among such worthies as Isaac Newton into the 18th century.

Illustration from the book Sędziwój by Józef Bohdan Dziekoński, 1896 edition

First appearance of this character in fiction was in an 1845 book "Sędziwoj" by Józef Bohdan Dziekoński, a writer during the times of romanticism in Poland. Nowadays he appears in several books by Polish writer Andrzej Pilipiuk (Kuzynki, Księżniczka, Dziedziczki). He was also shown (thinly disguised) as the Alchemist Sendivogius in the Polish TV series in the 1980s.

Sendivogius is also a character in the novel of Gustav Meyrink (part of Goldmachergeschichten, August Scherl Verlag, Berlin 1925), a German author from Prague, Bohemia, who often wrote about alchemy and alchemists. He is also the central character in the 2012 fictional conspiracy thriller The Man With the Devil's Hand by Jarek Garliński, a Polish-English author and translator, who mainly specialises in Polish history during the Second World War.