Sir Michael Stanhope (before 1508 – 26 February 1552) was the son of Sir Edward Stanhope of Rampton, Nottinghamshire. For a time an influential courtier, he was beheaded on Tower Hill on 26 February 1552 after he was convicted of conspiring to take the life of John Dudley, 1st Duke of Northumberland, and others.[1] 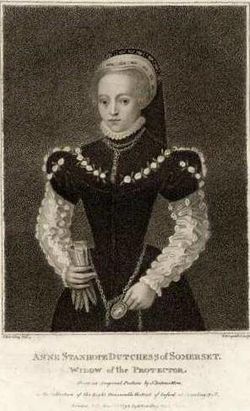 Stanhope, born before 1508,[1] was the second son of Sir Edward Stanhope (d. 6 June 1511)[2] of Rampton by his first wife, Adelina Clifton, the daughter of Sir Gervase Clifton, of Clifton, Nottinghamshire.[3] He was a direct descendant of King Edward I (and thus of William the Conquerer).[4][lower-alpha 1][lower-alpha 2] 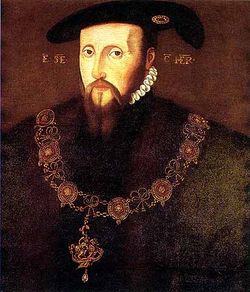 When his elder brother, Richard, died without male issue on 21 January 1529, Michael Stanhope succeeded to the family's lands, and by 1532 was in the service of Thomas Manners, 1st Earl of Rutland. By 1535 Stanhope's half sister, Anne, had married Edward Seymour, the brother of Jane Seymour, third wife of King Henry VIII, and Stanhope entered the King's service.[6]

In October 1536 he helped to prevent the spread of the rebellion known as the Pilgrimage of Grace, and was rewarded with an appointment as Justice of the Peace for Nottinghamshire, and the opportunity to acquire lands in Nottinghamshire which became available as a result of the dissolution of the monasteries. He bought Shelford priory in November 1537, leased Lenton priory in 1539, and in 1540 purchased the manor of Shelford and other properties.[6]

In the early 1540s Stanhope held several offices in Yorkshire, and by September 1544 had been appointed lieutenant of the garrison at Kingston upon Hull, an appointment which he likely owed to the influence of his brother-in-law, Seymour, now Earl of Hertford.[6] His responsibilities as lieutenant, and later as governor, included the supply of provisions, men and ships for Berwick and for English campaigns on the Scottish border and into Scotland itself. In 1546 he was in conflict with the townsmen of Hull, who complained to the Privy Council of his high-handedness, while he in turn complained of their 'lewd behaviour'.[3][6]

In 1547 King Edward VI acceded to the throne, and the young King's uncle, Stanhope's brother-in-law Edward Seymour, was created Duke of Somerset and made Lord Protector. Stanhope's own career reached its apex at this point. He was appointed Groom of the Stool to Edward VI, an appointment which effectually placed him in control of the King's privy purse, and 'was recognised as the leading figure in the royal entourage'.[6] He was Master of the King's Harriers in July 1548, and by 1549 was chief Gentleman of the Privy Chamber.[1] About this time he purchased further chantry lands, chiefly in Yorkshire.[6] 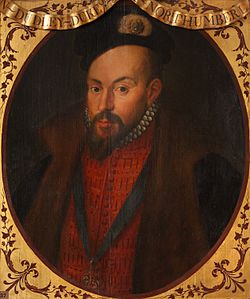 John Dudley, 1st Duke of Northumberland, whom Sir Michael Stanhope was convicted of conspiring to kill

In 1549, Stanhope's brother-in-law, Somerset, fell from power, and on 12 October 1549 Stanhope lost his own appointments and was imprisoned in the Tower. The Privy Council ordered his release on 17 February 1550, but the order was reversed on the following day. On 22 February Stanhope acknowledged a recognizance of £3000, and was granted his freedom. In early 1551 he was reappointed to the governorship of Kingston upon Hull, and again came into conflict with the local authorities. On 18 May 1551 he was released from the recognizance, but on 17 October of that year was again sent to the Tower, this time on a charge of involvement with Somerset in a conspiracy to take the life of John Dudley, 1st Duke of Northumberland and others.[8]

Somerset was beheaded on Tower Hill on 22 January 1552, and on 27 January Stanhope was put on trial for having 'feloniously instigated Somerset to insurrection', and for ‘holding rebellious assemblies, for the purpose of taking, imprisoning and murdering’ John Dudley, 1st Duke of Northumberland, William Parr, 1st Marquess of Northampton, and William Herbert, 1st Earl of Pembroke,[1] 'apparently under the act passed by Northumberland's influence in the parliament of 1549–50'.[8] According to Pollard, 'Stanhope was no doubt implicated in Somerset's endeavours to supplant Northumberland, but there is no evidence that he aimed at taking the Duke's life'.[8]

Stanhope was convicted, and was initially condemned to death by hanging. However the sentence of hanging was commuted, and he was beheaded on Tower Hill on 26 February 1552, 'stoutly maintaining his innocence'. His attainder was confirmed by an Act of Parliament passed on 12 April 1552.[8] The attainder was reversed early in the reign of Queen Mary, at which time his eldest son and heir, Sir Thomas Stanhope, took possession of his lands.[9]