Michael VII was born c. 1050 in Constantinople, the eldest son of Constantine X Doukas and Eudokia Makrembolitissa.[1] He was associated with his father on the throne late in 1059, together with or shortly before his newly born brother Konstantios Doukas.[2] When Constantine X died in 1067, Michael VII was 17 years old and should have been able to rule by himself. He exhibited little interest in politics, however, and his mother Eudokia and uncle John Doukas governed the empire as effective regents.[3]

On January 1, 1068, Eudokia married the general Romanos Diogenes, who now became senior co-emperor alongside Michael VII, Konstantios, and another brother, Andronikos.[4] When Romanos IV was defeated and captured by Alp Arslan of the Seljuk Turks at the Battle of Manzikert in August 1071,[5] Michael VII remained in the background, while the initiative was taken by his uncle John Doukas and his tutor Michael Psellos.[6] They conspired to keep Romanos from regaining power after his release from captivity, while Michael felt no obligation to honor the agreement that Romanos struck with the Sultan.[1] After the dispatch of Eudokia to a monastery, Michael VII was crowned again on October 24, 1071 as senior emperor.

Although still advised by Michael Psellos and John Doukas, Michael VII became increasingly reliant on his finance minister Nikephoritzes.[7] The emperor's chief interests, shaped by Psellos, were in academic pursuits, and he allowed Nikephoritzes to increase both taxation and luxury spending without properly financing the army. As an emperor he was incompetent, surrounded by sycophantic court officials, and blind to the empire collapsing around him.[1] In dire straits, imperial officials resorted to property confiscations and even expropriated some of the wealth of the church. The underpaid army tended to mutiny, and the Byzantines lost Bari, their last possession in Italy, to the Normans of Robert Guiscard in 1071.[6] Simultaneously, they faced a serious revolt in the Balkans, where they faced an attempt for the restoration of the Bulgarian state.[7] Although this revolt was suppressed by the general Nikephoros Bryennios,[7] the Byzantine Empire was unable to recover its losses in Asia Minor. 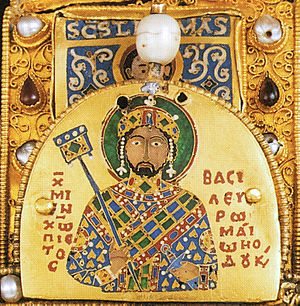 Depiction of Michael VII Doukas on the back of the Holy Crown of Hungary.

After Manzikert, the Byzantine government sent a new army to contain the Seljuk Turks under Isaac Komnenos, a brother of the future emperor Alexios I Komnenos, but this army was defeated and its commander captured in 1073.[8] The problem was made worse by the desertion of the Byzantines' western mercenaries, who became the object of the next military expedition in the area, led by the Caesar John Doukas.[8] This campaign also ended in failure, and its commander was likewise captured by the enemy. The victorious mercenaries now forced John Doukas to stand as pretender to the throne. The government of Michael VII was forced to recognize the conquests of the Seljuks in Asia Minor in 1074, and to seek their support.[1] A new army under Alexios Komnenos, reinforced by Seljuk troops sent by Malik Shah I, finally defeated the mercenaries and captured John Doukas in 1074.[9]

These misfortunes caused widespread dissatisfaction, exacerbated by the devaluation of the currency, which gave the emperor his nickname Parapinakēs, "minus a quarter".[1] In 1078 two generals, Nikephoros Bryennios and Nikephoros Botaneiates, simultaneously revolted in the Balkans and Anatolia, respectively.[9] Botaneiates gained the support of the Seljuk Turks, and he reached Constantinople first. Michael VII resigned the throne with hardly a struggle on March 31, 1078 and retired into the Monastery of Stoudios.[10] He later became metropolitan of Ephesus[11] and died in Constantinople in c. 1090.[12]

Various usurpers attempted to overthrow Michael VII or rule parts of the empire. These included: