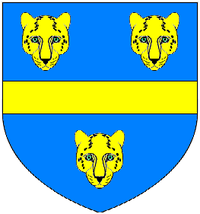 He brought 20 men-at-arms and 60 archers to France in 1415, in company with his father, who died at the Siege of Harfleur.[1] Michael thus succeeded to his title, but enjoyed it only briefly. He was killed at the Battle of Agincourt,[2] one of the few important English casualties of the battle. He married before November 1403 Elizabeth Mowbray, daughter of the 1st Duke of Norfolk,[3] but left no sons, only daughters:[4]

He was succeeded by his brother William de la Pole.