From Infogalactic: the planetary knowledge core
Jump to: navigation, search
For other uses, see Michaelmas (disambiguation).

Michaelmas /ˈmɪkəlməs/, the feast of Saint Michael the Archangel (also the Feast of Saints Michael, Gabriel, Uriel and Raphael, the Feast of the Archangels, or the Feast of Saint Michael and All Angels), is a day in the Western Christian liturgical year that occurs on 29 September. In medieval England, Michaelmas marked the ending and beginning of the husbandman's year, George C. Homans observes: "at that time harvest was over, and the bailiff or reeve of the manor would be making out the accounts for the year."[2]

In Christianity, the Archangel Michael is the greatest of all the Archangels and is honored for defeating Satan in the war in heaven.[3] He is one of the principal angelic warriors, seen as a protector against the dark of night, and the administrator of cosmic intelligence. Michaelmas has also delineated time and seasons for secular purposes as well, particularly in Britain and Ireland as one of the quarter days.

During the Middle Ages, Michaelmas, or the Feast of St. Michael, was celebrated as a Holy Day of Obligation, but this tradition was abolished in the 18th century.[6] Lutheran Christians consider it a principal feast of Christ, and the Lutheran Confessor, Philip Melanchthon, wrote a hymn for the day that is still sung in Lutheran churches: "Lord God to Thee We Give".

Because it falls near the equinox, it is associated in the northern hemisphere with the beginning of autumn and the shortening of days. It was also one of the English, Welsh and Irish quarter days when accounts had to be settled. On manors, it was the day when a reeve was elected from the peasants.[7] Michaelmas hiring fairs were held at the end of September or beginning of October.[8]

The name Michaelmas comes from a shortening of "Michael's Mass," in the same style as Christmas (Christ's Mass) and Candlemas (Candle Mass, the Mass where traditionally candles used throughout the year would be blessed).[9]

On the Isle of Skye, Scotland, a procession was held.[6] Many of the activities that had been done at Lughnasadh – sports, games and horse races – migrated to this day.[10] One of the few flowers left around at this time of year is the Michaelmas daisy. Hence the rhyme: "The Michaelmas daisies, among dead weeds, Bloom for St Michael's valorous deeds ..."[8]

Traditional meal for the day includes goose (a "stubble-goose", i.e. one prepared around harvest time).

The custom of baking a special bread, called Struan Micheil, on the eve of the Feast of Saint Michael the Archangel probably originated in the Hebrides. The bread was made from equal parts of barley, oats, and rye. In remembrance of absent friends or those who had died, special Struans, blessed at an early morning Mass, were given to the poor in their names.[11] Nuts were traditionally cracked on Michaelmas Eve.[12]

In northern Scotland and Ireland, a special cake called St Michael's bannock, or Michaelmas Bannock (also known as a Struan) was baked without using any metal implements.[10]

Folklore in the British Isles suggests that Michaelmas day is the last day that blackberries can be picked. It is said that when St. Michael expelled Lucifer, the devil, from heaven, he fell from the skies and landed in a prickly blackberry bush. Satan cursed the fruit, scorched them with his fiery breath, and stamped and spat on them, so that they would be unfit for eating. As it is considered ill-advised to eat them after 29 September, a Michaelmas pie is made from the last of the season.

Differences in number of archangels

In Anglican and Episcopal tradition, there are three or four archangels in its calendar for 29 September feast for St. Michael and All Angels: namely Michael, Gabriel and Raphael,[5] and often, Uriel.[13][14][15][16] The Bible itself identifies only Michael as "the archangel" (Jude:9).

It is used in the extended sense of autumn, as the name of the first term of the academic year, which begins at this time, at various educational institutions in the United Kingdom and Ireland.[7] These are typically those with lengthy history and traditions, notably the Universities of, Cambridge, Oxford, Durham, King's College London, University of King's College, Aberystwyth, Dublin, Glasgow, Kent and the London School of Economics.

Use by legal profession

The Inns of Court of the English Bar and the Honorable Society of King's Inns in Ireland also have a Michaelmas term as one of their dining terms. It begins in September and ends towards the end of December.

The term is also the name of the first of four terms into which the legal year is divided by the courts of Wales and England.[17]

In both the United Kingdom and in the United States, a Red Mass is traditionally convened on the Sunday closest to Michaelmas, in honor of and to bless lawyers and judges. 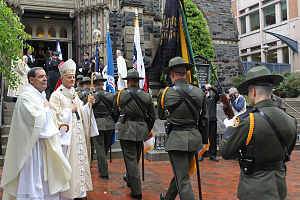 Because Saint Michael is the patron of some North American police officers, Michaelmas may also be a Blue Mass.[18]

Old Michaelmas Day falls on 11 October (10 October according to some sources). According to an old legend, blackberries should not be picked after this date. This is because, so folklore goes, Satan was banished from Heaven on this day, fell into a blackberry bush and cursed the brambles as he fell into them. In Yorkshire, it is said that the devil had spat on them. According to Morrell (1977), this old legend is well known in all parts of the United Kingdom, even as far north as the Orkney Islands. In Cornwall, a similar legend prevails, however, the saying goes that the devil urinated on them.[8]