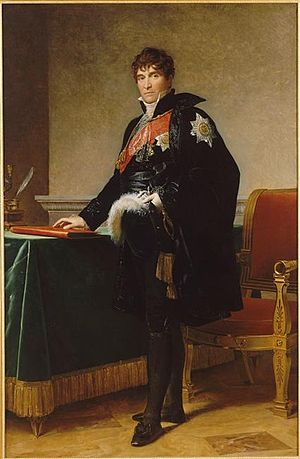 He was a lawyer in Paris and lieutenant of the maritime provostship of Rochefort. With the outbreak of the French Revolution in 1789, he was elected deputy to the Estates-General by the Third Estate in the sénéchaussée of Saint-Jean-d'Angély.[1]

His eloquence made him a prominent figure in the National Constituent Assembly, where he boldly attacked Honoré Mirabeau, and settled the dispute about the ashes of Voltaire by decreeing that they belonged to the nation.[1]

The moderation shown by the measures he proposed at the time of King Louis XVI's flight to Varennes, by his refusal to accede to the demands for the king's execution, and by the articles he published in the Journal de Paris and the Ami des Patriotes, marked him out for the hostility of the radical parties.[1]

He was arrested after the revolution of 10 August, but succeeded in escaping, and during the Thermidorian Reaction which followed the fall of Maximilien Robespierre, Regnaud de Saint-Jean d'Angély was appointed administrator of the military hospitals in Paris. His powers of organization brought him to Napoleon Bonaparte's notice, and he took, part in the 18 Brumaire Coup (9 November 1799).[1]

Under the Empire, he enjoyed the confidence of Napoleon Bonaparte, and was made councillor of state, president of election in the Conseil d'État, member of the Académie française, procureur général of the high court, and was created Count Regnaud de Saint-Jean d'Angély in 1808.[2]

He was dismissed on the first Bourbon Restoration, but resumed his posts during the Hundred Days, and, after the battle of Waterloo, persuaded the Emperor Napoleon to abdicate. He was exiled by the government of the Second Restoration, but subsequently obtained leave to return to France. He died on the day of his return to Paris. His supposed memoirs, Les Souvenirs du Comte Regnault de St Jean d'Angély (Paris, 1817), are spurious.[3]

Regnaud had married in 1795 Laure Guesnon de Bonneuil, the daughter of a former Maître d'Hôtel of the Count of Artois. They had no children,[citation needed] but his natural son Auguste Regnaud de Saint-Jean d'Angély became Marshal of France.[3]