From Infogalactic: the planetary knowledge core
Jump to: navigation, search
This article is about the Michelin company. For its restaurant guide and the stars awarded by it, see Michelin Guide.

Michelin (/ˈmɪʃəlɪn/ or /ˈmɪtʃəlɪn/; French pronunciation: ​[miʃˈlɛ̃]; full name: SCA Compagnie Générale des Établissements Michelin) is a tire manufacturer based in Clermont-Ferrand in the Auvergne région of France. It is one of the three largest tire manufacturers in the world along with Bridgestone and Goodyear.[3] In addition to the Michelin brand, it also owns the BFGoodrich, Kleber, Tigar, Riken, Kormoran and Uniroyal (in North America) tire brands. Michelin is also notable for its Red and Green travel guides, its roadmaps, the Michelin stars that the Red Guide awards to restaurants for their cooking, and for its company mascot Bibendum, colloquially known as the Michelin Man.

Michelin's numerous inventions include the removable tire, the pneurail (a tire for trains made to run on rails) and the radial tire. 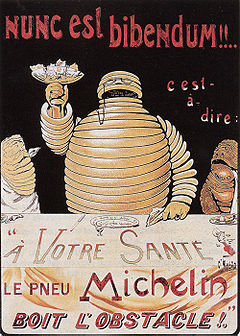 An 1898 poster by "O'Galop" of Bibendum, the Michelin Man 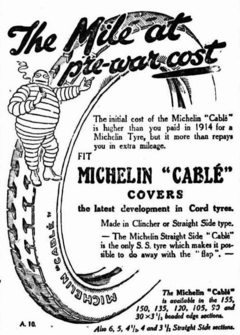 Michelin, advertising, Australia, 1922
Demonstration of the Michelin so called car-train with rubber tires in the Netherlands in 1932 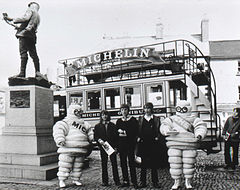 In 1889 two brothers, Édouard Michelin and André Michelin, ran a rubber factory in Clermont-Ferrand, France. One day, a cyclist whose pneumatic tire needed repair turned up at the factory. The tire was glued to the rim, and it took over three hours to remove and repair the tire, which then needed to be left overnight to dry. The next day, Édouard Michelin took the repaired bicycle into the factory yard to test. After only a few hundred metres, the tire failed. Despite the setback, Édouard was enthusiastic about the pneumatic tire, and he and his brother worked on creating their own version, one that did not need to be glued to the rim. Michelin was incorporated on 28 May 1889. In 1891 Michelin took out its first patent for a removable pneumatic tire which was used by Charles Terront to win the world's first long distance cycle race, the 1891 Paris–Brest–Paris.

In 1934, Michelin introduced a tire which, if punctured, would run on a special foam lining; a design now known as a run-flat tire (self-supporting type).

Michelin developed a key innovation in tire history, the 1946 radial tire (then known as the "X" tire).[5] It was developed with the front-wheel-drive Citroën Traction Avant and Citroën 2CV in mind. Michelin had bought the then-bankrupt Citroën in the 1930s. Because of its superiority in handling and fuel economy, use of this tire quickly spread throughout Europe and Asia.[6] In the U.S., the outdated bias-ply tire persisted, with market share of 87% in 1967.[6] In 1968, Consumer Reports, an influential American magazine, acknowledged the superiority of the radial construction, setting off a rapid decline in Michelin's competitor technology.[7] Even in the U.S., the radial tire now has a market share of 100%.[6]

In the 1920s and 1930s, Michelin operated large rubber plantations in Vietnam. Conditions at these plantations led to the famous labour movement Phu Rieng Do.[8] 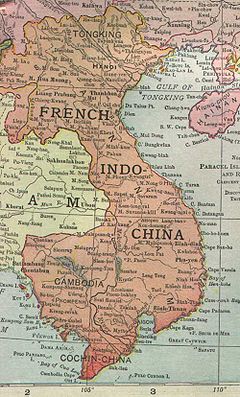 "French Indochina – The French community of about 40,000 lived in the European quarters, – for the mass of the population the reality was forced labour – working to produce the colony's exports of rice, tin, tea, and above all – rubber – the source of the fortune of the Michelin company."[9]

In 1988, Michelin acquired the tire and rubber manufacturing divisions of the American B.F. Goodrich Company founded in 1870. This included the Norwood, North Carolina manufacturing plant which supplied tires to the U.S. Space Shuttle Program.[10][11] Two years later, it bought Uniroyal, Inc., founded in 1892 as the United States Rubber Company. Uniroyal Australia had already been bought by Bridgestone in 1980.

Michelin also controls 90% of Taurus Tire in Hungary, as well as Kormoran,[12] a Polish brand.

As of 1 September 2008, Michelin is again the world's largest tire manufacturer after spending two years as number two behind Bridgestone.[13] Michelin produces tires in France, Spain, Germany, the USA, the UK, Canada, Brazil, Thailand, Japan, Italy and several other countries. On 15 January 2010, Michelin[14] announced the closing of its Ota, Japan plant, which employs 380 workers and makes the Michelin X-Ice tire. Production of the X-Ice will be moved to Europe, North America, and elsewhere in Asia.[15] 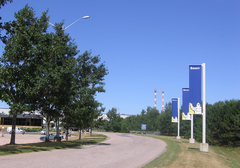 Michelin participated in MotoGP from 1972 to 2008. They introduced radial construction to MotoGP in 1984, and multi-compound tires in 1994. They achieved 360 victories in 36 years, and from 1993 to 2006, the world championship had gone to a rider on Michelins.

In 2007, Casey Stoner on Bridgestone tires won the world championship in dominating fashion, and Valentino Rossi and other top riders complained that Michelins were inferior. Rossi wanted Bridgestones for the 2008 season, but Bridgestone was reluctant to provide them; Dorna threatened to impose a control tire on the series, after which Bridgestone relented.

In 2008, Michelin's tires continued to be perceived as being inferior to Bridgestone's[citation needed], and Michelin committed errors of judgment in allocating adequate tires for some of the race weekends. Dani Pedrosa's team switched to Bridgestones in the midst of the season, a highly unusual move that caused friction between Honda Racing Corporation and their sponsor Repsol YPF. Other riders also expressed concerns and it seemed that Michelin might not have any factory riders for the 2009 season, leading to rumours that Michelin would withdraw from the series altogether. Dorna and the FIM announced that a control tire would be imposed on MotoGP for the 2009 season and Michelin did not enter a bid, effectively ending its participation in the series at the end of 2008.[16][17][18][19] Michelin have confirmed their return to MotoGP as of the 2016 season as official tire supplier after Bridgestone's withdrawal from the series at the end of the 2015 season.

Michelin first competed in the 1977 Formula One season, when Renault started development of their turbocharged F1 car. Michelin introduced radial tire technology to Formula One and won the Formula One Drivers' Championship with Brabham and McLaren, before withdrawing at the end of 1984.

The company returned to Formula One in 2001, supplying the Williams, Jaguar, Benetton (renamed Renault in 2002), Prost and Minardi teams. Toyota joined F1 in 2002 with Michelin tires, and McLaren also signed up with the company. Michelin tires were initially uncompetitive but by the 2005 season were totally dominant. This was partly because the new regulations stated that tires must last the whole race distance (and qualifying), and partly because only one top team (Ferrari) was running Bridgestones, and so had to do much of the development work. Michelin in contrast had much more testing and race data provided by the larger number of teams running their tires.

Following the debacle of the 2005 United States Grand Prix where, because of safety concerns, Michelin would not allow the teams it supplies to race, Michelin's share price fell by 2.5% (though it recovered later the same day). On 28 June, Michelin announced that it would offer compensation to all race fans who had bought tickets for the Grand Prix. The company committed to refunding the price of all tickets for the race. Additionally, it announced that it would provide 20,000 complimentary tickets for the 2006 race to spectators who had attended the 2005 event.

Michelin has had a difficult relationship with the sport's governing body (the FIA) since around 2003, and this escalated to apparent disdain between the two parties during the 2005 season. The most high profile disagreement was at the United States Grand Prix and the acrimony afterwards. Michelin criticised the FIA's intention to move to a single source (i.e. one brand) tire from 2008, and threatened to withdraw from the sport. In a public rebuke FIA President Max Mosley wrote "There are simple arguments for a single tire, and if [Michelin boss Édouard Michelin] is not aware of this, he shows an almost comical lack of knowledge of modern Formula One". Another bone of contention has been the reintroduction of tire changes during pit-stops from 2006. Michelin criticised the move claiming "this event illustrates F1's problems of incoherent decision-making and lack of transparency".

In December 2005, and as a result of the difficult relationship with the sport's governing body, Michelin announced that it would not extend its involvement in Formula One beyond the 2006 season.[20] Bridgestone was then the sole supplier of tires to Formula One until the end of the 2010 season, with Pirelli providing tires for 2011.

The last race won on Michelin tires in Formula One was the 2006 Japanese Grand Prix, Fernando Alonso benefitting after the Ferrari engine of Michael Schumacher failed during the race. This gave Michelin a second consecutive Constructors' Championship win, with the 2005 and 2006, after Bridgestone's seven-year winning streak, and brought to a total of four the number of titles for Michelin since this championship's inception back in the 1958 Formula One season; Michelin's other titles were in the 1979, and 1984 seasons.

Michelin is involved in endurance races such as the 24 Hours of Le Mans and the American Le Mans Series. In 2009 Michelin supplied tires for 41 of the 55 cars entered in Le Mans.[21]

Active Wheel from Michelin includes in-wheel electric motors and a motorised suspension to free up space in the front or rear of the vehicle. This model also eliminates the need for other notorious space hogs like transmissions and exhaust systems. The wheels already have a vehicle ready to receive them, the Heuliez Will from Opel, and are also expected to come standard on the Venturi Volage sometime in 2012.[22]

Tire retail in Europe with Euromaster and in the US with its wholly owned subsidiary TCI Tire Centers.[23]

Michelin has long published two guidebook series, the Red Guides to hotels and restaurants, and the Green Guides for tourism. It now publishes several additional guides, as well as digital map and guide products. The city maps in both the Red and the Green guides are of high quality, and are linked to the smaller-scale road maps.

Michelin publishes a variety of road maps, mostly of France but also of other European countries, Africa, Thailand and the United States. They have recently embarked in e-commerce selling Michelin maps and guides directly to the public through, for example, their UK website.[24] The Michelin roadmaps were reproduced in England for the Allied invasion during World War II. The Germans also reproduced in 1940 the 1938 edition Michelin maps for the invasion.[25]

ViaMichelin is a wholly owned subsidiary of Michelin Group, and was started in 2001, to represent Michelin's digital mapping services. As of August 2008, ViaMichelin generates 400 million maps and routes per month on its main website.[26]

In 1952, 6 years after Michelin patented its Radial Casing, Michelin adapted the radial technology to truck tires.[27]

From 1999, the company was headed by CEO Édouard Michelin. On 26 May 2006, Édouard drowned while fishing near the island of Sein, off the coast of Brittany.[28] His death brought Michel Rollier, a 2nd cousin of Édouard Michelin, to the head of the company. Rollier was replaced in May 2012 by Jean-Dominique Senard.[29]