Michie Stadium /ˈmaɪki/ is an outdoor football stadium on the campus of the U.S. Military Academy in West Point, New York. The home field for the Army Black Knights, it opened in 1924 and has a current seating capacity of 38,000.[2]

The stadium sits at the upper portion of campus, directly west of Lusk Reservoir. The field is at an elevation of 335 feet (102 m) above sea level and runs in the traditional north-south configuration, with the press box above the west sideline. Because of the view offered by its location overlooking the Hudson River and the medieval-style campus below, it was rated as Sports Illustrated's #3 sports venue of the 20th century.[3] 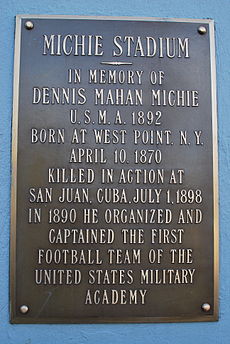 Michie Stadium is dedicated to the memory of Dennis Michie (1870–1898), who was instrumental in starting the football program while a cadet at the Academy. A member of the Class of 1892, Michie organized, managed, and coached the first football team at West Point in 1890. Six years after graduation, he was killed in Cuba during the Spanish–American War. There have been several renovations since the stadium's first game in October 1924, when Army defeated Saint Louis, 17–0.

Since 2008, the playing surface has been FieldTurf. This replaced AstroPlay, which had been used since 2001. The stadium's playing field was natural grass until AstroTurf was installed in 1977.[2]

Michie Stadium has hosted the Army–Navy Game only once, in 1943 during World War II. Since neither Army nor Navy have not played at an on-campus facility since very early in the rivalry, both home stadiums not nearly large enough to accommodate the crowds and media that usually attend the rivalry games, it is normally played at a neutral site between the campuses on the East Coast, usually in Philadelphia in early December.