The many upscale shops in Michigan Ave.

Michigan Avenue is a major north-south street in Chicago which runs at 100 east on the Chicago grid. The northern end of the street is at Lake Shore Drive on the shore of Lake Michigan in the Gold Coast Historic District. The street's southern terminus is at Sibley Boulevard in the southern suburb of Harvey, though like many Chicago streets it exists in several disjointed segments.[1]

As the home of the Chicago Water Tower, the Art Institute of Chicago, Millennium Park, and the high-end shopping on the Magnificent Mile, it is a street well known to Chicago natives as well as tourists to the city. Michigan Avenue also is the main commercial street of Streeterville. It includes all of the Historic Michigan Boulevard District and most of the Michigan–Wacker Historic District, including the scenic urban space anchored by the Michigan Avenue Bridge. 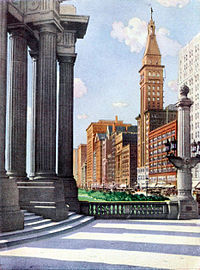 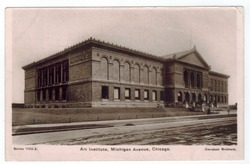 A postcard of the Art Institute posted 1907

In the Great Fire of 1871, all buildings on Michigan Avenue from Congress Street north to the river were destroyed. Immediately after the fire, the character of Michigan remained residential, but the street no longer was directly on the lake shore, as after the Fire, wreckage from the burnt district was used to fill in the inner harbor of Chicago, beginning the landfills that by the 1920s had moved the lake shore more than a quarter-mile east of its original shoreline, creating space for an expanded Grant Park. Beginning in the 1880s, the expansion of the central business district replaced houses on Michigan Avenue so that today, Michigan's character is primarily commercial north of 35th Street.

In 1924, the first traffic lights in Chicago were installed on Michigan Avenue after John D. Hertz fronted the city $34,000 for the purchase, installation, and maintenance.[4]

The Historic Michigan Boulevard District in 1911.

The southern end of the Magnificent Mile

This plan was further elaborated upon in Daniel Burnham's 1909 Plan of Chicago,[9] and in 1911 a plan was selected that included the widening of Michigan Avenue from Randolph Street to the river, replacing the Rush Street bridge with a new bridge at Michigan Avenue and the construction of a double-decked boulevard along Pine Street as far as Ohio Street.[10] When the Michigan Avenue bridge was completed, Pine Street was renamed Michigan Avenue. At its north end it merges into Lake Shore Drive near the Drake Hotel.

Today, the area north of the Chicago River is referred to as the Magnificent Mile, or sometimes simply the Mag Mile. It contains a mixture of upscale department stores, restaurants, high-end retailers, office buildings and hotels, and caters primarily to tourists and the affluent. The area also has a high concentration of the city's advertising agencies and major media firms, including the Chicago Tribune.

It is the home of Chicago's famous Water Tower landmark, Water Tower Park with its historic clock, as well as the eight-level Water Tower Place shopping center which grew up next door to, and overshadowed, the comparatively diminutive landmark. North of the shopping center can be found the famous John Hancock Center, the art deco Palmolive Building (also known as the Playboy Building) and the lavish Drake Hotel. The entire mile is noted for its spectacular Christmas displays. At the northern edge of this district can be found the One Magnificent Mile building; Chicago Landmark East Lake Shore Drive District, an extremely expensive and exclusive one-block area of real estate running east from North Michigan Avenue and facing directly onto Lake Michigan; and the on-ramp to northbound Lake Shore Drive.

From the River southwards

Outside the Art Institute of Chicago, looking north...

The portion of Michigan Avenue opposite Grant Park is the Chicago Landmark Historic Michigan Boulevard District. Major cultural institutions, such as the Chicago Cultural Center, Symphony Center, and the Auditorium Theater are located here, as are many late 19th and early 20th century skyscrapers.

The Art Institute of Chicago is across the boulevard, in Grant Park along the Avenue. Several large historic hotels are located just south of Congress Parkway, including the Hilton Towers Chicago (formerly, the Stevens Hotel), the Congress Plaza Hotel and the Blackstone Hotel. Between them is the Spertus Institute of Jewish Studies.

The Avenue extends south into Near South Side, Chicago and beyond – past what was once the notorious Levee District, the graceful homes of the Prairie Avenue District, the historic Second Presbyterian Church, the former home of the legendary Chess Records at 2120 South Michigan and the site where the Lexington Hotel, a hideout of Al Capone, once stood.

South of Cermak Road is the Motor Row District, a historic strip along Michigan Avenue that was home to many early 20th century automobile "palaces." A point of interest in this area is the former Illinois Automobile Club, which later was used as the home of the Chicago Defender, a prominent African-American Chicago newspaper at 2400 South Michigan. A little bit further south is Bronzeville, a historic black community in Chicago. Points of interest include the historic Mercy Hospital and Medical Center, the Illinois College of Optometry and the South Side Community Art Center.

The intersection of Michigan Avenue and 35th Street is home to two important local institutions. On the northwest corner is De La Salle Institute, a Catholic high school which was attended by future Chicago mayors Richard J. Daley, Richard M. Daley, and Michael Bilandic. On the southwest corner is the Chicago Police Department Headquarters. Michigan Avenue continues through the South Side and dead ends at 63rd Street, just north of a rail yard and parking lots.

The Avenue continues heading south at 66th Street to Marquette Road, where it moves a half-block to the east back into alignment with the run north of 63rd Street. It then continues south to 89th Street where it dead ends once again for a housing subdivision and a railroad line. It resumes at 91st Street heading south through the working class Roseland community, featuring a large commercial strip along Michigan between 111th and 115th streets. The street dead ends again at 127th Street just before the Cal-Sag Channel. It begins again in the south suburb of Riverdale before finally terminating at Sibley Boulevard or IL RT-83.

The CTA Red Line's Chicago and Grand stations are useful for reaching the Magnificent Mile. The Jackson station is close to the Art Institute, as are Loop stations on the Brown, Pink and Blue lines. Millennium and Van Buren Street Stations are located along Michigan Avenue serving the Metra Electric and South Shore Lines. The avenue is also traversed by a multitude of bus routes and taxi cabs primarily in the Downtown and Magnificent Mile areas.