Located in the region known to locals as Michiana, it is approximately 50 miles east of Chicago and 40 miles west of South Bend. The city had a population of 31,479 at the 2010 census.

Michigan City is noted for both its proximity to the Indiana Dunes National Lakeshore and for bordering Lake Michigan. Due to this, Michigan City receives a fair amount of tourism during the summer months, especially by residents of Chicago and of nearby cities in Northern Indiana. The lighthouse is a notable symbol for the city and is incorporated in the heading of Michigan City's sole newspaper, The News Dispatch, and the city's official seal.

Michigan City is also home to the stream Trail Creek which flows into Lake Michigan.

There were 12,136 households of which 30.5% had children under the age of 18 living with them, 33.4% were married couples living together, 19.0% had a female householder with no husband present, 6.5% had a male householder with no wife present, and 41.1% were non-families. 34.3% of all households were made up of individuals and 12% had someone living alone who was 65 years of age or older. The average household size was 2.37 and the average family size was 3.05.

The city has a usual weather pattern for a temperate region with thunderstorms in the summer and snow during winter. Summers are often warm with humidity. Due to its location next to Lake Michigan the city frequently experiences lake-effect snows and rain showers.

Michigan City's origins date to 1830, when the land for the city was first purchased by Isaac C. Elston, a real estate speculator who had made a small fortune in Crawfordsville. He paid about $200 total for 160 acres (¼ square mile) of land. Elston Middle School, formerly Elston High School, is named after the founder.[9]

The city was incorporated in 1836, by which point it had 1500 residents, along with a post office, a newspaper, a church, a commercial district and 10 hotels. In these six year the town has grown to a size of 15 square miles. That same year, the State Bank of Indiana opened a branch in town. 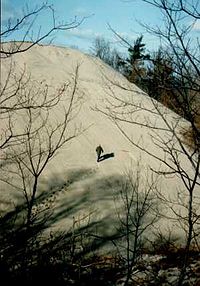 Michigan City also houses a zoo, and art center, and also is the home of the Indiana State Prison.[11]

Michigan City also has one of the nation's oldest active municipal bands. Free concerts are performed for the public every Thursday evening at the Guy F. Foreman Amphitheatre located in Washington Park.

The eastern edge of the Indiana Dunes National Lakeshore is also located in Michigan City. Features include Mount Baldy, a large wandering dune. A larger dune, Hoosier Slide, sat at the site of the current electrical generating station.[12] This dune was mined for its sand in the late 19th century. The sand found on the beaches in and near Michigan City is nicknamed "singing sand" because of the sound it produces.[13][14] 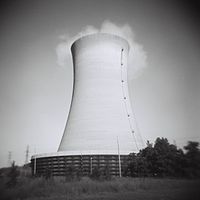 Michigan City Power Plant lies along the shore of Lake Michigan west of the downtown core. The cooling tower of the coal burning plant is visible for miles around and is often mistaken for a nuclear power plant.

Going forward Michigan City is looking to revitalize much of its north end, which contains the oldest portions of the city. One plan that has been discussed is the Andrews Plan[16][17] The Andrews Plan also won an award for 2008 CNU Charter Award of Excellence.[18] Most discussion centers on maintaining and expanding open and accessible park areas on Lake Michigan and along Trail Creek. 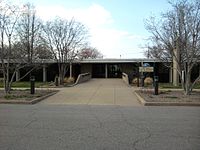 The mayor is Ron Meer.[19] Michigan City has a Council with nine members. Six are elected from geographic wards and three are elected as at-large members.[20]

The News-Dispatch is Michigan City's only daily newspaper, covering the city and the surrounding municipalities in LaPorte and Porter counties.[21] The Beacher is a Michigan City-based weekly newspaper that covers Beverly Shores, Michigan City, Long Beach, LaPorte, Michiana and New Buffalo.

The city is also covered by the county newspaper, The LaPorte County Herald-Argus.

Michigan City is in Chicago's Area of Dominant Influence. Radio and television broadcasts from both Chicago and South Bend reach most of the population.

The city has one Government-access television (GATV) station, Access LaPorte County.[23] As well as one channel operated by the local school system (MCAS).[24] 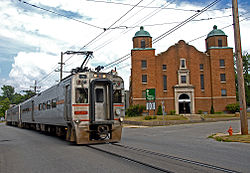 Michigan City is a major stop along the South Shore Line, one of the last interurban rail lines in the U.S. The train runs directly through on 11th Street (it has no separate right-of-way, and shares the street with automobiles and other road traffic), making two stops in Michigan City's downtown area (11th Street and Carroll Avenue). A third stop, at Willard Avenue and 10th Street, closed in 1994. This rail line connects Michigan City with downtown Chicago westward as well as the South Bend Regional Airport to the east.

Amtrak serves the city with Wolverine trains, which run from Chicago to Detroit, and Pontiac three times a day in each direction. Under the current schedule, Wolverine fills in several gaps in South Shore Line's weekday service and augments weekend service. While Wolverine trains are faster, the South Shore Line is cheaper and runs more frequently.

Michigan City operates a bus service.[25] Officially known as Michigan City Transit, it is made up of four routes that run on Monday-Saturday. All routes originate at Michigan City Public Library and travel around the city in (largely mono-directional) loops until they return to the library. Route 3 connects to Carroll Avenue South Shore Line station, while other routes connect to the 11th street station. In addition, Route 1 passes near the Amtrak station on the way to Washington Park. Michigan City also operates a Dial-a-Bus service.