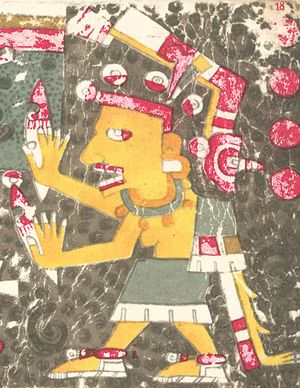 Mictecacihuatl as depicted in the Codex Borgia

In Aztec mythology, Mictecacihuatl (pronounced /miktekasiuat͡ɬ/) is Queen of Mictlan, the underworld, ruling over the afterlife with Mictlantecuhtli, another deity who is her husband.[1]

Her role is to watch over the bones of the dead and preside over the ancient festivals of the dead. These festivals evolved from Aztec traditions into the modern Day of the Dead after synthesis with Spanish traditions. She now presides over the contemporary festival as well. Mictecacihuatl is known as the Lady of the Dead, since it is believed that she was born, then sacrificed as an infant. Mictecacihuatl was represented with a defleshed body and with jaw agape to swallow the stars during the day.[2]