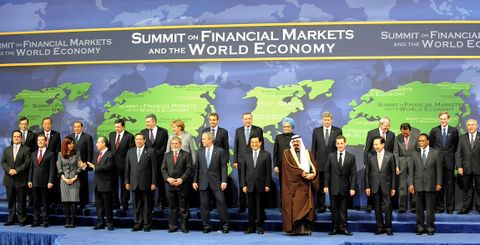 Leaders of the G-20 countries and others present at the 2008 G-20 Washington summit. Most members of the G-20 are middle powers while some are great powers.

In international relations, a middle power is a sovereign state that is not a superpower nor a great power, but still has large or moderate influence and international recognition. The concept of the "middle power" dates back to the origins of the European state system. In the late 16th century, Italian political thinker Giovanni Botero divided the world into three types of states – grandissime (empires), mezano (middle powers) and piccioli (small powers). According to Botero, a mezano or middle power "...has sufficient strength and authority to stand on its own without the need of help from others."[1]

No agreed standard method defines which states are middle powers. Some researchers use Gross National Product (GNP) statistics to draw lists of middle powers around the world. Economically, middle powers are generally those that are not considered too "big" or too "small," however that is defined. However, economics is not always the defining factor. Under the original sense of the term, a middle power was one that had some degree of influence globally, but did not dominate in any one area. However, this usage is not universal, and some define middle power to include nations that can be regarded as regional powers.

middle power status is usually identified in one of two ways. The traditional and most common way is to aggregate critical physical and material criteria to rank states according to their relative capabilities. Because countries' capabilities differ, they are categorized as superpowers (or great powers), middle powers or small powers. More recently, it is possible to discern a second method for identifying middle power status by focusing on behavioural attributes. This posits that middle powers can be distinguished from superpowers and smaller powers because of their foreign policy behaviour – middle powers carve out a niche for themselves by pursuing a narrow range and particular types of foreign policy interest. In this way middle powers are countries that use their relative diplomatic skills in the service of international peace and stability. Both measures are contested and controversial, though the traditional quantitative method has proved more problematic than the behavioural method.[citation needed]

According to Eduard Jordaan of Singapore Management University;

All middle powers display foreign policy behaviour that stabilises and legitimises the global order, typically through multilateral and cooperative initiatives. However, emerging and traditional middle powers can be distinguished in terms of their mutually-influencing constitutive and behavioural differences. Constitutively, traditional middle powers are wealthy, stable, egalitarian, social democratic and not regionally influential. Behaviourally, they exhibit a weak and ambivalent regional orientation, constructing identities distinct from powerful states in their regions and offer appeasing concessions to pressures for global reform. Emerging middle powers by contrast are semi-peripheral, materially inegalitarian and recently democratised states that demonstrate much regional influence and self-association. Behaviourally, they opt for reformist and not radical global change, exhibit a strong regional orientation favouring regional integration but seek also to construct identities distinct from those of the weak states in their region.[2]

Another definition, by the Middle Power Initiative: "Middle power countries are politically and economically significant, internationally respected countries that have renounced the nuclear arms race, a standing that give them significant international credibility."[3] Under this definition however, nuclear-armed states like India and Pakistan, and every state participant of the NATO nuclear sharing, would not be middle powers.

According to Laura Neak of the International Studies Association:

According to international relations scholar Annette Baker Fox, relationships between middle powers and great powers reveal more intricate behaviors and bargaining schemes than has often been assumed.[5] According to Soeya Yoshihide, "Middle Power does not just mean a state’s size or military or economic power. Rather, 'middle power diplomacy' is defined by the issue area where a state invests its resources and knowledge. Middle Power States avoid a direct confrontation with great powers, but they see themselves as ‘moral actors’ and seek their own role in particular issue areas, such as human rights, environment, and arms regulations. Middle powers are the driving force in the process of transnational institutional-building." (Soeya Yoshihide)[6]

Characteristics of middle power diplomacy include:[6]

The Middle Powers Initiative (MPI), a program of the Global Security Institute, highlights the importance of middle powers diplomacy. Through MPI, eight international non-governmental organizations are able to work primarily with middle power governments to encourage and educate the nuclear weapons states to take immediate practical steps that reduce nuclear dangers, and commence negotiations to eliminate nuclear weapons. Middle power countries are particularly influential in issues related to arms control, being that they are politically and economically significant, internationally respected countries that have renounced the nuclear arms race, a standing that gives them significant political credibility.

The term first entered Canadian political discourse after World War II. Prime Minister Louis St. Laurent, for example called Canada "a power of the middle rank" and helped to lay out the classical definition of Canadian middle power diplomacy. When he was advocating for Canada's election to the United Nations Security Council, he said that while "...the special nature of [Canada's] relationship to the United Kingdom and the United States complicates our responsibilities," Canada was not a "satellite" of either but would "continue to make our decisions objectively, in the light of our obligations to our own people and their interest in the welfare of the international community."[8] Canadian leaders believed Canada was a middle power because it was a junior partner in larger alliances (e.g. NATO, NORAD), was actively involved in resolving disputes outside its own region (e.g. Suez Crisis), was not a former colonial power and therefore neutral in anti-colonial struggles, worked actively in the United Nations to represent the interests of smaller nations and to prevent the dominance of the superpowers (often being elected to the United Nations Security Council for such reasons), and because it was involved in humanitarian and peacekeeping efforts around the world.

In March 2008, Australian Prime Minister Kevin Rudd defined his country's foreign policy as one of "middle power diplomacy", along the lines of similar criteria. Australia would "influence international decision-makers" on issues such as "global economic, security and environmental challenges".[9]

The overlaps between the lists of middle powers and great powers show that there is no unanimous agreement among authorities.[10]

Nations such as China, France, Russia and the United Kingdom are generally considered to be great powers due to their economic, military and strategic importance, their status as recognised nuclear powers and their permanent seats on the United Nations Security Council. Some academics also believe that Germany and Japan are great powers, but due to their large advanced economies and global influence as opposed to military and strategic capabilities.[11] Yet sources have at times referred to these nations as middle powers too:[12][13]

Some in the field of international relations, such as Professor Kirton and a Sciences Po academic, support the claim that Italy and Canada are great powers due to their status and membership in the G7.[19][20] Moreover, according to a 2014 report by the Hague Centre for Strategic Studies (HCSS), Italy is listed among the great powers.[21] Although broad academic support for India as a great power is uncommon, some in the field of political science, such as Malik Mohan and Dr. Zbigniew Brzezinski, consider India to be a great power too.[22][23] Canada, India and Italy are also described as middle powers:

As with the great powers, there is no unanimous agreement among authorities as to which countries are considered middle powers. Lists are often the subject of much debate and tend to place comparatively large countries (e.g. Brazil) alongside relatively smaller ones (e.g. Norway).[33] Clearly not all middle powers are of equal status; some are considered regional powers and members of the G20 (e.g. Australia), while others could very easily be considered small powers (e.g. Czech Republic). Some larger middle powers also play important roles in the United Nations and other international organisations such as the WTO.

The following is a list of countries that have been, at some point in time, considered middle powers by academics or other experts: