From Infogalactic: the planetary knowledge core
Jump to: navigation, search
For other uses, see Midgard (disambiguation).

The runes a:miþkarþi for Old Norse à Miðgarði meaning "in Midgard" – "in Middle Earth", on the Fyrby Runestone (Sö 56) in Södermanland, Sweden.

Midgard (an anglicised form of Old Norse Miðgarðr; Old English Middangeard, Swedish/Danish Midgård, Old Saxon Middilgard, Old High German Mittilagart, Gothic Midjun-gards; literally "middle enclosure") is the name for the world (in the sense of oikoumene) inhabited by and known to humans in early Germanic cosmology, and specifically one of the Nine Worlds in Norse mythology.

This name occurs in Old Norse literature as Miðgarðr. In Old Saxon Heliand it appears as Middilgard and in Old High German poem Muspilli it appears as Mittilagart. The Gothic form Midjungards is attested in the Gospel of Luke as a translation of the Greek word οἰκουμένη. The word is present in Old English epic and poetry as Middangeard; later transformed to Middellærd or Mittelerde ("Middle-earth") in Middle English literature.[1]

Midgard is a realm in Norse mythology. It is one of the Nine Worlds of North Mythology—the only one that is completely visible to mankind (the others may intersect with this visible realm but are mostly invisible). Pictured as placed somewhere in the middle of Yggdrasil, Midgard is between the land of Niflheim—the land of ice—to the north and Muspelheim—the land of fire—to the south. Midgard is surrounded by a world of water, or ocean, that is impassable. The ocean is inhabited by the great sea serpent Jörmungandr (Miðgarðsormr), who is so huge that he encircles the world entirely, grasping his own tail. The concept is similar to that of the Ouroboros. Midgard was also connected to Asgard, the home of the gods, by the Bifröst, the rainbow bridge, guarded by Heimdallr.

In Norse mythology, Miðgarðr became applied to the wall around the world that the gods constructed from the eyebrows of the giant Ymir as a defense against the Jotuns who lived in Jotunheim, east of Manheimr, the "home of men", a word used to refer to the entire world. The gods slew the giant Aurgelmir (Ymir) (the first created being) and put his body into the central void of the universe, creating the world out of his body: his flesh constituting the land, his blood the oceans, his bones the mountains, his teeth the cliffs, his hairs the trees, and his brains the clouds. Aurgelmir's skull was held by four dwarfs, Nordri, Sudri, Austri, and Vestri, who represent the four points on the compass and became the dome of heaven. The sun, moon, and stars were said to be scattered sparks in the skull. 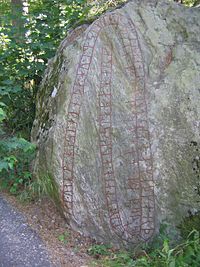 According to the Eddas, Midgard will be destroyed at Ragnarök, the battle at the end of the world. Jörmungandr will arise from the ocean, poisoning the land and sea with his venom and causing the sea to rear up and lash against the land. The final battle will take place on the plane of Vígríðr, following which Midgard and almost all life on it will be destroyed, with the earth sinking into the sea, only to rise again, fertile and green when the cycle repeats and the creation begins again.

Although most surviving instances of the word refer to spiritual matters, it was also used in more mundane situations, as in the Viking Age runestone poem from the inscription Sö 56 from Fyrby:

The Danish and Swedish form Midgård or Midgaard, the Norwegian Midgard or Midgård, as well as the Icelandic form Miðgarður, all derive from the Old Norse term.

The name middangeard occurs half a dozen times in the Old English epic poem Beowulf, and is the same word as Midgard in Old Norse. The term is equivalent in meaning to the Greek term Oikoumene, as referring to the known and inhabited world.

The concept of Midgard occurs many times in Middle English. The association with earth (OE eorðe) in Middle English middellærd, middelerde is by popular etymology; the continuation of geard "enclosure" is yard. An early example of this transformation is from the Ormulum:

that our Lord wanted / be born in this middle-earth.

The usage of "Middle-earth" as a name for a setting was popularized by Old English scholar J. R. R. Tolkien in his The Lord of the Rings and other fantasy works; he was originally inspired by the references to middangeard and Éarendel in the Old English poem Crist.

Mittilagart is mentioned in the 9th century Old High German Muspilli (v. 54) meaning "the world" as opposed to the sea and the heavens: