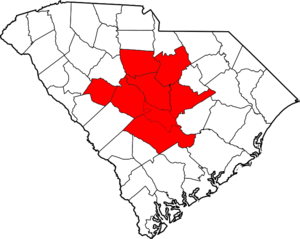 The eight counties that usually consist of the Midlands.

The Midlands roughly refers to an area in the middle of South Carolina. It is centered in Columbia, the state's capital and largest city. The Midlands is so named because it is halfway point between the Upstate and the Lowcountry.

There are eight counties included in the Midlands area of South Carolina, but not limited to:

This region is largely coextensive with the Columbia metropolitan area (which includes Newberry County and excludes Sumter County) and the Columbia television and radio market (all eight counties plus Newberry).

Suburban towns and cities over 10,000 in population

Suburbs with less than 10,000 inhabitants