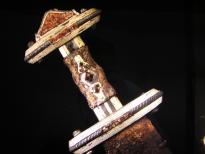 Hilt of a Vendel period sword found at Valsgärde.

The type of sword popular during the migration period and the Merovingian period of European history (c. 4th to 7th centuries), particularly among the Germanic peoples was derived from the Roman era Spatha, and gave rise to the Carolingian or Viking sword type of the 8th to 10th centuries.

The blade is normally smooth or shows a very shallow fuller, and often has multiple bands of pattern-welding within the central portion. The handles were often of perishable material and there are few surviving examples. Blade length measured between 28" and 32" (710 and 810 mm) in length and 1.7" to 2.4" (45 to 60 mm) in width. The tang has a length of only some 4" to 5" (100 to 130 mm) long. The blades show very little taper, usually ending in a rounded tip.

Surviving examples of these Merovingian-period swords have notably been found in the context of the Scandinavian Germanic Iron Age (Vendel period).

There is no single term that can be reconstructed as having referred specifically to the spatha in Common Germanic. There are a number of terms and epithets which refer to the sword, especially in Germanic poetry.[1]

Terms for "blade", "point" or "edge" which pars pro toto could also refer to the sword as a whole include

From the testimony of Germanic mythology and the Icelandic sagas, swords could also be given individual names. Examples include the magic sword of Högni, named Dáinnleif after the dwarf Dáinn (Skáldskaparmál), Skofnung and Hviting, two sword-names from the Kormáks saga, Nægling and Hrunting from Beowulf, and Mimung forged by Wayland the Smith.

The spatha came into widespread use in the Roman army during the 3rd century. It was during this time that the early Germanic tribes adopted the weapon. There are types of the spatha, dated to the 3rd and 4th centuries, associated with the northern parts of the empire (Germania), such as the Straubing-Nydam type, but these are usually still classed as late Roman spathae, as they are still found in a Roman military, not a "native Germanic" context. An early find of Roman spathae in a native Germanic context (as opposed to Roman military camps in Germania) is the deposit of sixty-seven Roman swords in the Vimose bog (3rd century).

The military burials at Gelduba begin in the late 1st century with the establishment of a Roman camp in Germania Inferior, and they continue without interruption throughout the period of withdrawal of Roman troops and the establishment of early Frankish presence in the mid-5th century.

The Krefeld type spathae appear in graves from approximately the 430s through the 460s. In these graves, the exalted prestige of the sword is not yet fully developed, and some of them are surprisingly poor. They rather seem to still continue the tradition of military graves of the Roman period, of warriors buried with their personal weapon, the presence of a sword perhaps indicating service in the late Roman army.

Six Krefeld type swords are known from Francia, four from Alamannia, and another two from England.

A native industry producing "Germanic swords" then emerges from the 5th century, contemporary with the collapse of the Western Roman Empire. The Germanic spatha did not replace the native seax, sometimes referred to as gladius or ensis "sword", but technically a single-edged weapon or knife. It rather establishes itself, by the 6th century, at the top of the scale of prestige associated with weapons. While every Germanic warrior grave of the pagan period was furnished with weapons as grave goods, the vast majority of the 6th- to 7th-century graves have a seax and/or a spear, and only the richest have swords.

Swords could often become important heirlooms. Æthelstan Ætheling, son of king Æthelred, in a will of c. 1015 bequeathed to his brother Eadmund the sword of king Offa (died 796), which at that time must have been over 200 years old.[3] 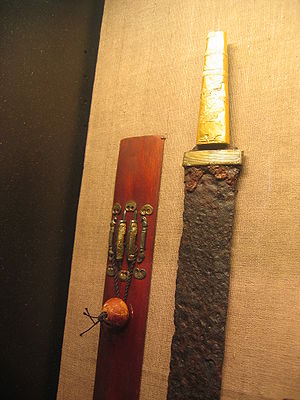 The gold hilt spatha was a very rare and prestigious type of sword in the later 5th century. Specimens are known mostly from Alemannia (Pleidelsheim, Villingendorf), but also as far afield as Moravia (Blučina).

An "Alamannic type" is distinguished from a "Franconian type" based on scabbard mounts and hilt design by Quast (1993). A total of 20 examples are known, ten of each type.[4]

One of the "Franconian" examples is the sword of Childeric I (died 481), recovered from his tomb at Tournai. Some authors have suggested that Childeric's sword was a "ceremonial sword" not intended for combat, perhaps produced for the occasion of his burial. [5] 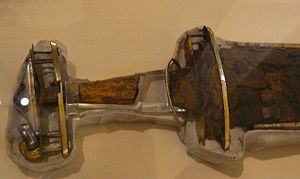 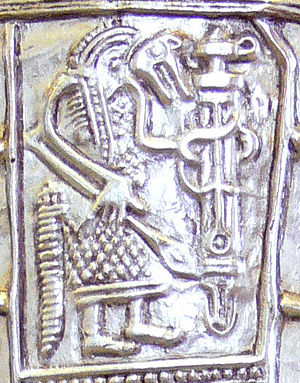 The ring-sword (also ring-spatha, ring-hilt spatha) is a particular variant of the Germanic migration period swords. Ring-swords are characterized by a small ring fixed to the hilt (not to be confused are Late Medieval to Renaissance Irish swords with ring-shaped pommels, also known as "ring-swords").

Ring-swords come into fashion in the last phase of the Migration period (or the beginning of the Early Middle Ages, in the 6th and 7th centuries. They are found in Vendel era Scandinavia and in Anglo-Saxon England as well as on the Continent (Saxony, Francia, Alemannia). These swords were prestigious, prized possessions, probably reserved for kings and high nobility. The ring is interpreted as a symbolic "oath ring".[6]

The design appears to originate in the late 5th century, possibly with the early Merovingians, and quickly spreads to England (from the earliest phase of Anglo-Saxon presence) and Scandinavia. The Beowulf poem uses the term hring-mæl, literally "ring-sword" or "ring-ornament",[7] and scholars who interpret this as referring to this type of sword can point to it as one indication that the Beowulf poet was still drawing from an unbroken tradition of the pagan period, as ring-swords disappear from the archaeological record with Christianization, by the late 7th century.[8]

Transition to the Carolingian sword

In the 8th century, Frankish sword smiths increasingly gained access to high quality steel imported from Central Asia, where a via import from Central Asia, where a crucible steel industry began to establish itself.[13] The earliest types of "Viking swords" according to the typology of Petersen (1919) are dated to the second half of the 8th century, while the "Viking sword" proper (and notably the Ulfberht type) emerges by the turn of the 9th century.