Miguel López de Legazpi (Spanish pronunciation: [miˈɣel ˈlopeθ ðe leˈɣaθpi]; c. 1502 – 20 August 1572), also known as El Adelantado and El Viejo (The Elder), was a Spanish navigator and governor who established the first Spanish settlement in the East Indies when his expedition crossed the Pacific Ocean from the Viceroyalty of New Spain in modern-day Mexico, arriving in Cebu in the Philippine Islands in 1565. He was the first Governor-General of the Spanish East Indies, which was governed from and mainly located in the Philippines. It also encompassed other Pacific islands namely Guam and the Mariana Islands. After obtaining peace with various indigenous nations and kingdoms, he made Cebu City the capital of the Spanish East Indies in 1565 and later transferred to Manila in 1571.[1] The capital city of the province of Albay bears his name. 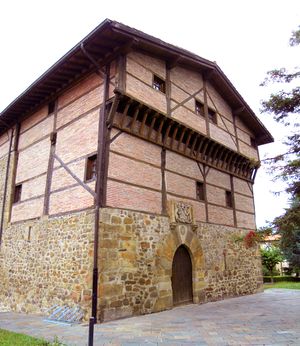 Born in 1502, Miguel López de Legazpi was the youngest son of Don Juan Martínez López de Legazpi and Doña Elvira de Gurruchátegui. He was born to a noble family and lived in the town of Zumárraga, in the Basque province of Guipúzcoa in Spain.

Between 1526 and 1527, López de Legazpi worked as a councilor in the municipal government of his town.

In 1528, Hernán Cortés established settlements in North America and López de Legazpi traveled to Mexico (New Spain) to start a new life. This was due to the death of his parents and his dissatisfaction with his eldest sibling, who inherited the family fortune. In Tlaxcala, he worked with Juan Garcés and Juan's sister, Isabel Garcés. López de Legazpi would go on to marry Isabel and have nine children with her. Isabel died in the mid-1550s.

Between 1528 and 1559, he worked as a leader of the financial department council and as the civil governor of Mexico City.

Expedition to the Philippines

A route of the Spanish expeditions in the Philippines.

In 1564, López de Legazpi was commissioned by the viceroy, Luís de Velasco, to lead an expedition in the Pacific Ocean, to find the Spice Islands where the earlier explorers Ferdinand Magellan and Ruy López de Villalobos had landed in 1521 and 1543, respectively. The expedition was ordered by King Philip II of Spain, after whom the Philippines had earlier been named by Villalobos. The viceroy died in July 1564, but the Audiencia and López de Legazpi completed the preparations for the expedition.

On 19 or 20 November 1564, five ships, carrying 500 soldiers, over half of whom were Mexicans (Criollos, Mestizos and Indios)[2] and the remaining, Spaniards, sailed from the port of Barra de Navidad, New Spain, in what is now Jalisco state, Mexico (other sources give the date as 1 November 1564, and mention 'four ships and 379 men') the flagship nao San Pabló, the almiranta San Pedro, and the pinnaces San Juan and San Lucas.[3] Members of the expedition included six Augustinian missionaries, in addition to Fr. Andrés de Urdaneta, who served as navigator and spiritual adviser,[4] Melchor de Legazpi (Miguel López de Legazpi's son), Felipe de Salcedo (one of Miguel López de Legazpi's grandsons), and Guido de Lavezarez (a survivor of Ferdinand Magellan's expedition).

López de Legazpi and his men sailed the Pacific Ocean for 93 days. In 1565, they landed in the Mariana Islands, where they briefly anchored and replenished their supplies. There they fought with Chamorro tribes and burned several huts.

Arrival in the Philippines

A chief of Bohol island named Catunao gave information to Miguel López about Cebu and accompanied López as a guide.[5] López de Legazpi's expedition anchored off the Indianized Rajahnate of Cebu on 13 February 1565, but did not put ashore due to opposition from natives.[6]:77

On 27 April 1565, the expedition returned to Cebu and landed there. Rajah Tupas challenged the Spaniards, but was overpowered. The Spaniards established a colony, naming the settlements "Villa del Santisimo Nombre de Jesús" (Town of the Most Holy Name of Jesus) after an image of Sto. Niño in one of the native houses.[6]:77[lower-alpha 1]

In 1569, due to a scarcity of food provisions in Cebu, López de Legazpi transferred to Panay town on the island of Panay, where they were peacefully welcomed by the people in the Kedatuan of Madja-as. Subsequently, they founded a second settlement, then named Capiz and now the city of Roxas in Capiz province, located on the bank of the Panay River. In 1570, López de Legazpi sent Juan de Salcedo, his grandson who had arrived from Mexico in 1567, to Mindoro to punish the Muslim Moro pirates who had been plundering Panay villages. Salcedo also destroyed forts on the islands of Ilin and Lubang, respectively South and Northwest of Mindoro[6]:79[9]

Luzon and the capture of Manila

Main articles: Battle of Manila (1570) and Battle of Bangkusay

In 1570, having heard of the rich resources in Luzon, López de Legazpi dispatched Martín de Goiti to explore the northern region. Landing in Batangas with a force of 120 Spaniards, de Goiti explored the Pansipit River, which drains Taal Lake.[6]:79 On 8 May, they arrived in Manila Bay. There, they were welcomed by the natives. Goiti's soldiers camped there for a few weeks while forming an alliance with the Muslim leader, Rajah Ache (better known as Rajah Matanda), who was a vassal under the Sultan of Brunei. López de Legazpi wanted to use Manila's harbor as a base for trade with China. However, the Rajah's ally in northern shores of Manila Bay, historically known as the young Bambalito of Macabebe, asked Rajah Soliman (Old Ache) to revoke his alliance with the Spaniards. Rajah Matanda refused because of the "word of honor" of the Spaniards. Rajah Soliman had his conditions for Bambalito that if they were able to kill as least 50 Spaniards, he would revoke his alliance with López de Legazpi, and the Old Ache would help to expel the conquerors. Bambalito rode back to Macabebe and formed a fleet of two thousand five hundred moros consisting of soldiers from the villages along Manila Bay particularly from Macabebe and Hagonoy.[10] On 30 May 1570, Bambalito sailed to Tondo with Caracoas and encountered the Spaniards at Bangkusay Channel, headed by Martin de Goiti on 3 June 1571. Bambalito and his fleet had lost the battle, and after disputes and hostility had erupted between the two groups, the Spaniards occupied the Islamized states of Tondo and Maynila. Manila was prepared by Goiti for López de Legazpi who left Panay.[lower-alpha 1]

In the same year, more reinforcements arrived in the Philippines, prompting López de Legazpi to leave Cebu for Panay and then for Luzon. He recruited 250 Spanish soldiers and 600 native warriors to explore the regions of Leyte and Panay. The following year, he followed Goiti and Salcedo in Manila, after learning that the villages had been conquered.

During the early phase of the exploration of the northern part of the Philippines, López de Legazpi remained in Cebu and did not accompany his men during their conquest of Manila because of health problems and advanced age.

In Manila, López de Legazpi formed a peace pact with the native councils as well as the local rulers, Rajah Sulayman and Lakan Dula).[lower-alpha 1] Both groups agreed to organize a city council, consisting of two mayors, twelve councilors and a secretary. López de Legazpi established a settlement there on 24 June 1571, and he also ordered the construction of the walled city of Intramuros. He proclaimed the town as the island's capital, and the seat of the Spanish government in the East Indies.[1]

Upon the defeat of Bambalito, López de Legazpi ordered the exploration of the villages north of Manila. In September 1571, Goiti pacified Lubao and Betis, using riverine tributaries of Rio Chico, then he reached the settlements in Calumpit and Malolos on 14 November 1571 and other old villages mostly along Manila Bay. López de Legazpi had established a government on the islands and became the first Spanish governor of the Philippines.

López de Legazpi governed the Philippines for a year before dying suddenly of a stroke in Manila on 20 August 1572 after scolding an aide.[11][12] He died bankrupt, leaving a few pesos behind,[quantify] due to having spent most of his personal fortune during the conquest. He was laid to rest in San Agustin Church, Intramuros.

By the time of López de Legazpi's death, the parts of the Visayas had passed to Spanish rule. The Spanish met strong resistance from Muslim sultanates on the island of Mindanao, the Zambal tribes of Zambales, and the Igorot of the Cordilleran mountains, as well as some Wokou pirates from China and Japan.[citation needed]

Letters to the King of Spain

During his final years, López de Legazpi wrote several letters to Philip II of Spain about his journey to the East Indies, and the conquest he had achieved.[13] These were collectively known as the "Cartas al Rey Don Felipe II: sobre la expedición, conquistas y progresos de las islas Felipinas" (Letters to the King Lord Philip II: on the expedition, conquests, and progress of the Philippine Islands). The letters are preserved at the General Archive of the Indies in Seville, Spain.

Role of religion on the expedition

At the time of López de Legazpi's arrival, the natives of the archipelago practiced Islam, Hinduism, Buddhism and animism. Part of the motivation of the Spaniards was to evangelize population and convert people to Roman Catholicism.

With the Augustinian, Franciscan and other friars, who had helped him establish a government on the islands, López de Legazpi worked to convert the natives to the Christian religion. In 1609, Antonio de Morga, Alcalde of Criminal Causes, in the Royal Audiencia of New Spain wrote:

After the islands had been conquered by the sovereign light of the holy gospel which entered therein, the heathen were baptized, the darkness of their paganism was banished and they changed their own for Christian names. The islands also, losing their former name, took — with the change of religion and the baptism of their inhabitants — that of Filipinas Islands, in recognition of the great favors received at the hands of his Majesty Filipe the Second, our sovereign, in whose fortunate time and reign they were conquered, protected and encouraged, as a work and achievement of his royal hands.[14]

The López de Legazpi and Urdaneta expedition to the Philippines effectively created the trans-Pacific Manila galleon trade, in which silver mined from Mexico and Potosí was exchanged for Chinese silk, porcelain, Indonesian spices, Indian gems and other goods precious to Europe at the time. The trade route formed an important commercial link between Latin America and the Asia-Pacific with the trade products even carried over to Europe via the Havana Galleons, while heavily financing the Spanish Empire.[15] The introduction of Western ingredients, goods, and imperialism brought about the 'Hispanization' of the islands.

For the next 333 years, from 1565 when Spain first established a colony in the country until the Treaty of Paris on 10 December 1898, the Philippines was a Spanish colony (including the years 1762–1764 when the British controlled Manila and the port city of Cavite but not the whole country).[citation needed]