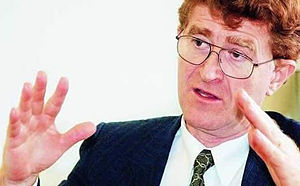 Prior to joining National Science Foundation, he obtained a doctorate from the Polytechnic University of Bucharest (1976), he was Professor of Mechanical Engineering at the University of Kentucky (1981–1995), and held visiting professorships at the California Institute of Technology (1988–1989), Johns Hopkins University (1993–1995), Tohoku University (1989), and Delft University of Technology (1997–98).[1] He has played a leadership role in the National Nanotechnology Initiative and in developing perspectives on the societal implications of nanotechnology and on convergence of nanotechnology with other fields, in what is sometimes called converging technologies or emerging technologies.[2][3]

In 2002, he co-organised the Euro-American workshop "Nanotechnology: Revolutionary Opportunities and Societal Implications", editing the proceedings with Renzo Tomellini of the European Commission.[4]

He was declared engineer of the year in 1999 and 2004 by NSF and the U.S. National Society of Professional Engineers.

He was honored as recipient of the Carl Duisberg Award in Germany, “Burgers Professorship Award” in Netherlands and the “University Research Professorship” award in U.S. He was named the “Engineer of the Year” in 1999 and again in 2004 by the U.S. National Society of Professional Engineers and NSF. In 2002, he received the “Best of Small Tech Awards” (“Leader of the American nanotech revolution”). Forbes magazine recognized him in 2003 as the first among “Nanotechnology’s Power Brokers” and Scientific American named him one of 2004’s top 50 Technology Leaders. Dr. Roco is the 2005 recipient of the AIChE Forum Award "for leadership and service to the national science and engineering community through initiating and bringing to fruition the National Nanotechnology Initiative". He received the National Materials Advancement Award[5] from the Federation of Materials Societies at the National Press Club in 2007 for NNI leadership and “as the individual most responsible for support and investment in nanotechnology by government, industry, and academia worldwide”.

On Sep. 7th, 2011, he received the ChinaNANO Award at the www.chinanano.org in Beijing, China.