John Michael Hawthorn (10 April 1929 – 22 January 1959) was a British racing driver. He became the United Kingdom's first Formula One World Champion driver in 1958, whereupon he announced his retirement, having been profoundly affected by the death of his team-mate and friend Peter Collins two months earlier in the German Grand Prix. Hawthorn died in a road accident six months later.

Mike Hawthorn was born in Mexborough, West Riding of Yorkshire, England, to Leslie and Winifred (née Symonds) Hawthorn,[2] and educated at Ardingly College, West Sussex. His father owned the Tourist Trophy Garage in Farnham, franchised to supply and service several high performance brands including Jaguar and Ferrari.[3] Leslie Hawthorn raced motorcycles and supported his son's racing career; when he too died in a road accident, in 1954, Mike Hawthorn inherited the business.[4]

Mike Hawthorn made his competition debut in his 1934 Riley Ulster Imp, KV 9475, winning the 1,100 c.c. sports car class at the Brighton Speed Trials on 2 September 1950.[5] In 1951, driving a 1½-litre T.T. Riley, he entered the Motor Sport Brooklands Memorial Trophy, a season-long contest run at Goodwood, winning it by one point.[6] He also won the Ulster Trophy Handicap at Dundrod and the Leinster Trophy at Wicklow that year.[7]

Hawthorn made his Formula One debut at the 1952 Belgian Grand Prix, finishing in fourth place. He won his first Grand Prix, at the ninth attempt, driving for Ferrari in the 1953 French Grand Prix at Reims. 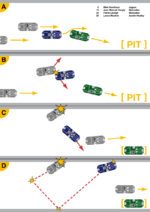 In January 1955, Hawthorn joined the Jaguar racing team, replacing Stirling Moss, who had left for Mercedes.[8] Hawthorn won the 1955 24 hours of Le Mans race following what has been described as an inspired drive in which he set a lap record of 122 mph during a three-hour duel with Juan Manuel Fangio in the early stages. The race was marred by the greatest disaster in motor racing history - a crash which killed 84 spectators and driver Pierre Levegh, after Hawthorn had suddenly braked in front of Lance Macklin's Healey after overtaking him to enter the pits, causing Macklin to swerve into the path of Levegh's Mercedes. After colliding with the Healey, the Mercedes skipped the earthen embankment separating the spectator area from the track, bounced through spectator enclosures, then hit a concrete stairwell structure head-on. The impact shattered the front end of the car, which then somersaulted high, pitching debris into the spectator area, before landing atop the earthen embankment. The debris, including bonnet, engine, and front axle, which separated from the frame, flew through the crowd. Eight hours later, while leading the race 1.5 laps ahead of the Jaguar team, the Mercedes team withdrew from the race, ostensibly as a mark of respect for those who had perished in the accident; the Jaguar team was invited to join them but declined.[9] The French press carried photographs of Hawthorn and Ivor Bueb celebrating their win with the customary champagne but treated them with scorn.[10] The official inquiry into the accident ruled that Hawthorn was not responsible for the crash, and that it was merely a racing incident. The death of the spectators was blamed on inadequate safety standards for track design. The Grandstand and pit areas were demolished and rebuilt soon after.[10] The death toll led to a ban on motorsports in France, Spain, Switzerland, Germany and other nations, until the tracks could be brought to a higher safety standard.

Whilst sharing the Jaguar D-Type with Desmond Titterington during the 1955 RAC Tourist Trophy at Dundrod, Hawthorn passed Fangio twice, and set the lap record for the RAC Tourist Trophy on the Dundrod Circuit, only to lose in the final stages when, running on full tanks, he was passed by Moss when the D Type's engine failed on the last lap.[11][12] In 1957, Hawthorn rejoined the Ferrari factory team, and soon became friends with Peter Collins, a fellow Englishman and Ferrari team driver. During the 1957 and 1958 racing seasons, the two Englishmen became engaged in a fierce rivalry with Luigi Musso, another Ferrari driver, for prize money. Hawthorn won the 1958 French Grand Prix at Reims, in which Musso was fatally injured while in second place (see Rivalry with Luigi Musso below).

Hawthorn won the 1958 Formula One Championship despite achieving only one win, against four by Moss. Leading easily in the Monaco Grand Prix at half distance, his 246 engine blew, while at Monza he was a minute ahead of Tony Brooks when his clutch forced him to slow to second place. Hawthorn benefited greatly from the gentlemanliness of Moss, as demonstrated at the Portuguese Grand Prix at Porto. Hawthorn was disqualified for bump starting his stalled car downhill in the opposite direction, on the way to a second-place finish. Moss interceded on Hawthorn's behalf and the decision was ultimately reversed. After a pit stop midway through that race, Hawthorn accelerated back through the field to gain an extra point for fastest lap. Moss had failed to respond, possibly doubting Hawthorn could lap so fast with damaged drum brakes. This extra world championship point plus the second place points contributed to Hawthorn winning the championship with a season total just one more than that of Moss. In the final race, the Moroccan Grand Prix, Hawthorn drove a conservative tactical race aiming to stay ahead of Moss's Vanwall teammates. Brooks' car broke while narrowly leading Hawthorn, and Stuart Lewis-Evans in the third Vanwall crashed after a desperate attempt to move through the field and challenge Hawthorn running third; Evans later died of burns. In the last laps, second-placed Phil Hill slowed and waved Hawthorn through to gain enough points to take the Championship.

After winning the title, Hawthorn immediately announced his retirement from Formula One, having been badly affected by the death of his close friend and Ferrari team mate Peter Collins in that year's German Grand Prix.

Hawthorn was noted for wearing a bow tie when racing.[13][14] 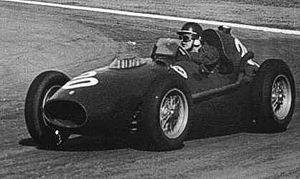 Hawthorn driving his Ferrari at the 1958 Argentine Grand Prix

Many years after the death of Mike Hawthorn, Fiamma Breschi, Luigi Musso's girlfriend at the time of his death, revealed the nature of Musso's rivalry with Hawthorn and Collins in a television documentary, The Secret Life of Enzo Ferrari. Breschi recalled that the antagonism between Musso and the two English drivers encouraged all three to take more risks:

"The Englishmen (Hawthorn and Collins) had an agreement", she says. "Whichever of them won, they would share the winnings equally. It was the two of them against Luigi, who was not part of the agreement. Strength comes in numbers, and they were united against him. This antagonism was actually favourable rather than damaging to Ferrari. The faster the drivers went, the more likely it was that a Ferrari would win." Breschi related that Musso was in debt at the time of his death, and the money for winning the 1958 French Grand Prix (traditionally the largest monetary prize of the season), was all-important to him.

After visiting the mortally-injured Musso in hospital, Breschi returned to her hotel, where she and the rest of the Ferrari team were informed by the team manager that afternoon that Musso had died. Within thirty days Collins too was dead, and the following January, Hawthorn. Breschi could not suppress a feeling of release: "I had hated them both", she said, "first because I was aware of certain facts that were not right, and also because when I came out of the hospital and went back to the hotel, I found them in the square outside the hotel, laughing and playing a game of football with an empty beer can. So when they died, too, it was liberating for me. Otherwise I would have had unpleasant feelings towards them forever. This way I could find a sense of peace."[15]

Hawthorn was in fact deeply affected by Musso's death. Musso had raced recklessly as he desperately needed the prize money to pay off his creditors. He had confided his financial worries to Collins with a view to obtaining help; Collins asked Hawthorn, but Hawthorn refused. His refusal was not a selfish gesture, as if he won, the prize money would go to Mlle. Delaunay, the mother of his child. When they left the hospital in Reims, Hawthorn had merely kicked a beer can that was lying on the ground; Collins bounced it back.[16]

Mike Hawthorn never married, but fathered a son, Arnaud Michael Delaunay, by a young girl he met in Reims after winning the French Grand Prix in 1953. He was engaged at the time of his death to the fashion model Jean Howarth, who later married another racing driver, Innes Ireland, in 1992.[17]

On 22 January 1959, only months into his retirement, Hawthorn died in a car accident on the A3 Guildford bypass while driving his comprehensively-modified 1958 Jaguar 3.4-litre saloon (now known as the 3.4 Mk 1) VDU 881 to London. While the circumstances of the accident are well documented, the precise cause remains unknown.[18]

The accident occurred on a notoriously dangerous section of the road, the scene of 15 serious accidents (two fatal) in the previous two years; the road was also wet at the time. Driving at speed (one witness estimated 80 m.p.h.), Hawthorn overtook a Mercedes-Benz 300SL 'gull-wing' sports car driven by an acquaintance, the motor racing team manager Rob Walker. On entering a right-hand bend shortly after passing the Mercedes, Hawthorn clipped a 'Keep Left' bollard dividing the two carriageways, causing him to lose control. The Jaguar glanced an oncoming Bedford lorry before careering back across the eastbound carriageway sideways into a roadside tree, uprooting it. The impact occasioned Hawthorn's fatal head injuries and propelled him onto the rear seat.

There was inevitably speculation that Hawthorn and Walker had been racing each other, fuelled by Walker's persistent refusal at the coroner's inquest to estimate the speed of his own car at the time.[19] In an interview with motor racing driver Eoin Young and writer Eric Dymock in 1988, Walker admitted he had indeed been racing Hawthorn, but had been advised by a police officer investigating the accident to make no further mention of it lest he incriminate himself.[20]

Possible causes of the accident include driver error, a blackout, or mechanical failure, although examination of the wreck revealed no obvious fault. There is evidence that Hawthorn had recently suffered blackouts, perhaps because of kidney failure.[21] By 1955, Hawthorn had already lost one kidney to infection, and had begun suffering problems with the other; he was expected at the time to live only three more years.[10]

At the Coroner's Inquest on 26 January the jury returned a verdict of accidental death.[22]

In Farnham, the town where he lived up to the time of his death, there is a street named Mike Hawthorn Drive (off Dogflud Way). It was in this town that Hawthorn ran the Tourist Trophy Garage which sold Jaguars, Rileys, Fiats and Ferraris. There is a hill and corner named after him at Brands Hatch and a corner at the Croft racing circuit at Croft-on-Tees in North Yorkshire, while in Towcester on the Shires estate, three miles from the Silverstone circuit, Hawthorn Drive is named for him. There is a statue at Goodwood Circuit commemorating Hawthorn as the UK's first Formula One World Champion.

The Hawthorn Memorial Trophy has been awarded to the most successful British or Commonwealth F1 driver every year since 1959.[23] Nigel Mansell has won the award the most times, taking the trophy on seven occasions in eight years from 1985 to 1992. The current holder is Lewis Hamilton, the 2014 World Champion.[24]