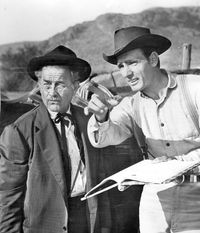 With Dennis Weaver on the Gunsmoke set, 1961. 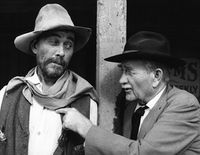 Stone was born in Burrton in Harvey County near Hutchinson in central Kansas, to Herbert Stone and the former Laura Belfield. There, he graduated from Burrton High School, where he was active in the drama club, played basketball, and sang in a barbershop quartet. His uncle (Stone's brother, Joe Stone, says cousin),[1] Fred Stone, was a versatile actor who appeared on Broadway and in circuses. In the 1930s, Stone came to Los Angeles, California to launch his own screen career. He was featured in the "Tailspin Tommy" adventure serial for Monogram Pictures. In 1940, he appeared with Marjorie Reynolds, Tristram Coffin, and I. Stanford Jolley in the comedy espionage film Chasing Trouble. That same year, he co-starred with Roy Rogers in the film Colorado in the role of Rogers's brother-gone-wrong.[2]

Stone played a Dr. Blake in the 1943 film Gung Ho! and a liberal-minded warden in Monogram Pictures' Prison Mutiny in 1943. Signed by Universal Pictures in 1943, in the film Captive Wild Woman (1943), Jungle Woman (1943), Sherlock Holmes Faces Death [Captain Pat Vickery], (1944), he became a familiar face in its features and serials. He portrayed a Ration Board representative in the Universal-produced public service film "Prices Unlimited", for the U.S. Office of Price Administration and the U.S. Government Office of War Information, in 1944. One of his film roles was a radio columnist in the Gloria Jean-Kirby Grant musical I'll Remember April. He made such an impression in this film that Universal gave him a starring role (and a similar characterization) in the 1945 serial The Master Key.

In 1955, One of CBS Radio's hit series, the western Gunsmoke, was adapted for television and recast with experienced screen actors. Howard McNear, the radio "Doc Adams," was replaced by Milburn Stone, who gave the role a harder edge consistent with his screen portrayals. He stayed with Gunsmoke through its entire run and was often shown sparring in a friendly manner with costars Dennis Weaver and Ken Curtis, who played, respectively, deputies Chester Goode and Festus Haggen.[2]

In March 1971,[3] Stone had heart bypass surgery at UAB Hospital in Birmingham, Alabama. In June 1980, Stone died of a heart attack in La Jolla in San Diego, California. He was survived by his second wife, the former Jane Garrison, a native of Hutchinson, Kansas, who died in 2002. Stone had married, divorced, and remarried Garrison. Stone had a surviving daughter, Shirley Stone Gleason (born c. 1926) of Costa Mesa, California, from his first marriage of twelve years to Ellen Morrison, formerly of Delphos, Kansas, who died in 1937.[1] He was buried at the El Camino Memorial Park in Sorrento Valley, San Diego.[4]

In 1975, Stone received an honorary doctorate from St. Mary of the Plains College in Dodge City, Kansas, where Gunsmoke was set but not filmed.[2]

A painting of the Doc Adams character was commissioned from Gary Hawk, a painter from Stone's home state of Kansas. When then-U.S. President Ronald W. Reagan, a friend of Stone's, heard about the painting, Hawk was invited to the Oval Office to present the artwork to the President. Stone lived to see Reagan emerge as the likely Republican nominee for President in 1980 but not to witness Reagan's defeat of Jimmy Carter. Stone died in 1980 and Reagan wasn't inaugurated until 1981.

For his contribution to the television industry, Milburn Stone has a star on the Hollywood Walk of Fame at 6801 Hollywood Boulevard. In 1981, Stone was inducted posthumously into the Western Performers Hall of Fame at the National Cowboy & Western Heritage Museum in Oklahoma City, Oklahoma. After his death he left a legacy for the performing arts in Cecil County in northeastern Maryland, by way of the Milburn Stone Theatre in North East, Maryland.

Though he was five years her junior, Stone was an uncle of the character actress Madge Blake.[5]