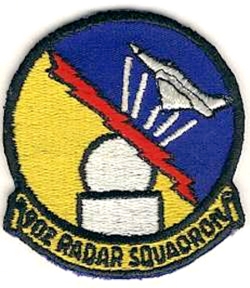 Emblem of the 902d Radar Squadron

Miles City Air Force Station was established as part of the planned deployment by Air Defense Command of forty-four Mobile radar stations across the United States to support the permanent Radar network established during the Cold War for air defense of the United States. This deployment had been projected to be operational by mid-1952.

The 902d Aircraft Control and Warning Squadron was activated at the station on 1 October 1954. By August 1955 the 902nd AC&W Squadron was operating an AN/MPS-7 search radar and an AN/MPS-14 height-finder radar, and initially the station functioned as a Ground-Control Intercept (GCI) and warning station. As a GCI station, the squadron's role was to guide interceptor aircraft toward unidentified intruders picked up on the unit's radar scopes. In 1958 an AN/FPS-20 radar replaced the AN/MPS-7. In 1961 this set was upgraded and redesignated as an AN/FPS-66. Also in 1961 an AN/FPS-6B height-finder radar was installed.

The radar squadron provided information 24/7 the SAGE Direction Center where it was analyzed to determine range, direction altitude speed and whether or not aircraft were friendly or hostile. On 31 July 1963, the site was redesignated as NORAD ID Z-98.

The 902nd Radar Squadron was inactivated in June 1968. Its AN/FPS-27 radar set was then shipped to Mount Hebo AFS, Oregon (M-100/Z-100) and installed there, replacing the troublesome AN/FPS-24 which had recently lost its third radome.

Today, the former Miles City Air Force Station is now the Fort Keogh Livestock and Range Research Lab (USDA), part of Montana State University. Many of the Air Force buildings have been torn down, replaced by modern facilities. A few foundations and deteriorating buildings remain of the sites military past.