Mileva Marić (Serbian Cyrillic: Милева Марић; December 19, 1875 – August 4, 1948) was a Serbian physicist and mathematician, who married Albert Einstein. She was a brilliant student and could have had an academic career had she not married and had children. She undoubtedly contributed a lot to Einstein's work and his career, sacrificing her own ambition for his. He acknowledged that she helped him and wrote of her, “I need my wife. She resolves all of my mathematical problems.”

Maric was the only woman among Albert Einstein's fellow students at the Zurich Polytechnic. They developed a relationship and had a daughter Lieserl, whom Mileva was forced to give up for adoption because of the scandal of having a child out of wedlock. After she married Einstein in 1903, they had two sons, Hans Albert and Eduard.

They separated in 1914, with Marić taking the boys and returning to Zurich from Berlin. They divorced in 1919; that year Einstein married again. When he received the Nobel Prize in 1921, he transferred the money to Marić, chiefly to support their sons; she had access to the interest. In 1930 at about age 20, their second son Eduard had a breakdown and was diagnosed with schizophrenia. With expenses mounting by the late 1930s for his institutional care, Marić sold two of the three houses she and Einstein had invested in. He had made regular contributions to his sons' care, which he continued after emigrating to the United States with his second wife (Elsa, his first cousin).

On December 19, 1875, Mileva Marić was born into a wealthy family in Titel in the Austro-Hungarian Monarchy (today Serbia) as the eldest of three children of Miloš Marić (1846–1922) and Marija Ružić - Marić (1847–1935).[1] Shortly after her birth, her father ended his military career and took a job at the court in Ruma and later in Zagreb. She began her secondary education in 1886 at a high school for girls in Novi Sad,[2] but changed the following year to a high school in Sremska Mitrovica.[3] Beginning in 1890, Mileva Marić attended the Royal Serbian Grammar School in Šabac.[3] In 1891 her father obtained special permission to enroll Marić as a private student at the all-male Royal Classical High School in Zagreb.[4] She passed the entrance exam and entered the tenth grade in 1892. She won special permission to attend physics lectures in February 1894 and passed the final exams in September 1894. Her grades in mathematics and physics were the highest awarded.[4] That year she fell seriously ill and decided to move to Switzerland, where on November 14, she started at the "Girls High School" in Zurich.[5] In 1896, Marić passed her Matura-Exam, and started studying medicine at the University of Zurich for one semester.[5] Despite her ill health, and suffering from a marked limp, Mileva was a brilliant student, excelling at languages and the piano as well as mathematics and science.

In the autumn of 1896, Marić switched to the Zurich Polytechnic (later Eidgenössische Technische Hochschule (ETH)),[6] having passed the mathematics entrance examination with an average grade of 4.25 (scale 1-6).[7] She enrolled for the diploma course to teach physics and mathematics in secondary schools (section VIA) at the same time as Albert Einstein. She was the only woman in her group of six students, and the fifth woman to enter that section, an impressive feat at a time when women were not usually admitted. She had to be extraordinarily talented to overcome the restrictions on women's admittance.[5][8] She became friends with Einstein who was three years younger than her and had failed the entrance exam. They fell in love and Marić played the expected role, fostering his talents and encouraging him at the expense of her own studies. His grades went up and hers went down.

In October Marić went to Heidelberg to study at Heidelberg University for the winter semester 1897/98, attending physics and mathematics lectures as an auditor.[9] She rejoined the Zurich Polytechnic in April 1898,[9] where her studies included the following courses: differential and integral calculus, descriptive and projective geometry, mechanics, theoretical physics, applied physics, experimental physics, and astronomy.[10] Marić sat the intermediate diploma examinations in 1899, one year later than the other students in her group. Her grade average of 5.05 (scale 1-6) placed her fifth out of the six students taking the examinations that year.[11] (Einstein had come top of the previous year's candidates with a grade average of 5.7.[12] Marić's grade in physics was 5.5, the same as Einstein's.) In 1900 Marić failed the final teaching diploma examinations with a grade average of 4.00, having obtained only grade 2.5 in the mathematics component (theory of functions). Einstein passed the exam in fourth place with a grade average of 4.91. Passing was 5.[13]

Marić's academic career was disrupted in 1901 when she became pregnant by Einstein. When three months pregnant, she resat the diploma examination, but failed for the second time without improving her grade.[14] She also discontinued work on her diploma dissertation, which she had hoped to develop into a Ph.D. thesis under the supervision of the physics professor Heinrich Weber.[15] She went to Novi Sad, where her daughter was born in 1902, probably in January. The girl was referred to in correspondence between the couple as Lieserl. The girl was given up for adoption to avoid the disgrace of Marić having a child while still unmarried.

File:Einstein Haus.jpg
Center: the Einsteinhaus Kramgasse 49 in Bern. On the second floor: the flat where Albert and Mileva Einstein lived from 1903 to 1905

In 1903 Marić and Einstein married in Bern, Switzerland, where Einstein had found a job at the Federal Office for Intellectual Property. She adopted the role of a supportive wife, doing all the housework and childcare, while also helping him with his groundbreaking work. In 1904 their first son Hans Albert was born. The Einsteins lived in Bern until 1909, when Einstein got a teaching position at the University of Zürich. In 1910 their second son Eduard was born. In 1911 they moved to Prague, where Einstein held a teaching position at the Charles University and Mileva accompanied him. A year later, they returned to Zurich, where Einstein had accepted a professorship.

Move to Berlin and separation

In July 1913 Max Planck and Walther Nernst asked Einstein to come to Berlin, which he agreed to, but the decision caused Marić distress.[16] In August the Einsteins planned a walking holiday with their sons and Marie Curie and her two daughters. Marić was delayed temporarily due to Eduard being ill, but they joined the party.[17] In September the Einsteins visited Marić's parents near Novi Sad, and on the day they were to leave for Vienna, Marić had her sons baptised as Orthodox Christians.[18] After Vienna Einstein visited relatives in Germany while Marić returned to Zurich. After Christmas she traveled to Berlin to stay with Fritz Haber, who helped her look for accommodation for the Einsteins' impending move in April 1914.[19] The Einsteins both left Zurich for Berlin in late March. On the way Einstein visited an uncle in Antwerp and then Ehrenfest and Lorentz in Leiden, while Marić took a holiday with the children in Locarno, arriving in Berlin in mid-April.[19]

The marriage became strained in 1912, in the spring of which Einstein started a close relationship with his cousin Elsa Löwenthal (née Einstein). They began a regular correspondence and Mileva was aware that her husband was being unfaithful. Soon after settling in Berlin, Einstein gave Mileva a choice, of either remaining with him as a mere housekeeper and servant, or separating entirely. She chose the latter. In the summer of 1914, Marić took the boys back to Zurich, a separation that was to become permanent. Einstein made a contract, drawn up by a lawyer, to send her an annual maintenance of 5600 Reichsmarks in quarterly instalments, just under half of his salary.[20][21] After the required five years of separation, the couple divorced on February 14, 1919.[22]

They agreed a settlement[23] whereby the Nobel Prize money that Einstein anticipated he would soon receive was to be placed in trust for their two boys. Einstein would receive the Prize for his work, and she would receive the money. Marić would be able to draw on the interest, but have no authority over the capital without Einstein's permission.[24][25] After Einstein married his cousin Elisabeth in June 1919, he returned to Zurich to talk to Marić about the children's future. During the visit, he took Hans Albert for a sail on Lake Constance and Eduard to Arosa for convalescence.

In 1922, Einstein received news that he had won the Nobel Prize in November; he transferred the money to Marić in 1923. The money was used to buy three houses[26] in Zurich: Marić lived in one, a five-story house at Huttenstrasse 62; the other two were investments.[27] Georg Busch, who later became professor at the ETH, and his family were among her tenants.

In 1930 at about age 20, Eduard had a breakdown and was diagnosed with schizophrenia. By the late 1930s the costs of his care at the University of Zurich psychiatric clinic "Burghölzli" overwhelmed Marić; she sold two of the houses to raise funds for his maintenance there.[28] In 1939 Marić agreed to transfer ownership of the Huttenstrasse house to Einstein in order to prevent its loss as well, but retained power of attorney. Einstein also made regular cash transfers to Marić for Eduard's and her own livelihood.[29]

Marić never got any recognition in her lifetime for the work she had done and her contribution to Einstein's theory of relativity. She spent her old age in poverty and obscurity, died at the age of 72 on August 4, 1948 in Zurich, and was buried at Nordheim-Cemetery.[30] Eduard Einstein was institutionalized until his death in 1965. 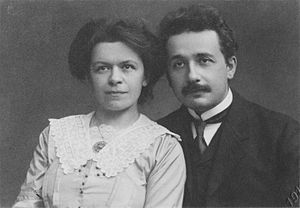 The question whether (and if so, to what extent) Marić contributed to Einstein's early work, and to the Annus Mirabilis Papers in particular, has been the subject of some debate. Male historians of physics are reluctant to admit that she made any significant scientific contribution. Yet Einstein himself admitted that she was the superior mathematician and that he consulted her whenever he had a difficult mathematical problem. [31] Her biographers have argued that she was a supportive companion in science and may have helped him materially in his research.[32][33]

The case for Marić as a co-author of some of Einstein's early work, putatively culminating in the 1905 papers, is based mostly on the following evidence:

There is enough evidence to support the idea that Marić helped Einstein to develop his theories.[43] The couple's first son, Hans Albert, said that when his mother married Einstein, she gave up her scientific ambitions.[44] Einstein remained an extremely fruitful scientist well into the 1920s, producing work of the greatest importance long after separating from Marić in 1914.[45] She never published anything but she never got any academic position, devoting herself to looking after her husband and sons, the younger of whom was mentally ill and very demanding.[46] Marić was never mentioned as having been involved with his work by the friends and colleagues of Einstein, but they would have shared the prevalent assumption that genius is a male preserve. Marić was a modest person who never claimed that she had ever played any role in Einstein's scientific work, nor hinted at such a role in personal letters to her closest friend, Helene Savić.[47]

In 2005 Marić was honoured in Zurich by the ETH and the Gesellschaft zu Fraumünster. A memorial plaque was unveiled on her former residence in Zurich, the house Huttenstrasse 62, in her memory.[48][49][50] In the same year a bust was placed in her high-school town, Sremska Mitrovica. Another bust is located on the campus of the University of Novi Sad. A high-school in her birth town Titel is also named after her.[51] Sixty years after her death, a memorial plate was placed on the house of the former clinic in Zurich where she died. In June 2009 a memorial gravestone was dedicated to her at the Nordheim-Cemetery where she rests.[52]

In 1995 Narodna knjiga in Belgrade published the book Mileva Marić Ajnštajn by Dragana Bukumirović, in Serbian.[53] Three years later Vida Ognjenović produced the play Mileva Ajnštajn, which was translated into English in 2002.[54]