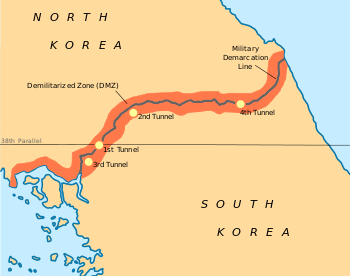 The Military Demarcation Line within the Korean Demilitarized Zone.

The Military Demarcation Line (MDL), sometimes referred to as the Armistice Line, is the land border or demarcation line between North Korea and South Korea. On either side of the line is the Korean Demilitarized Zone (DMZ). The MDL and DMZ were established by the Armistice at the end of the Korean War in 1953.[1]

In the Yellow Sea, the two Koreas are divided by a de facto maritime "military demarcation line" and maritime boundary called the Northern Limit Line (NLL) drawn by the United Nations Command in 1953.[2] The NLL is not described by the Korean Armistice Agreement.[3] 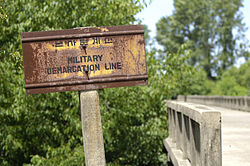 In Korean, the line is called the Hyujeonseon (휴전선), meaning "armistice line."[5] It is also sometimes called the Gunsa Bungye-seon (군사분계선), which literally means "military demarcation line." However, in colloquial usage, the dividing line is more often called the Sampalseon (삼팔선, "38th parallel"), a name likely coined at the end of World War II, when it would have been an accurate description of the North-South border.

There have been frequent skirmishes along the line since the armistice ended the fighting of the Korean War. 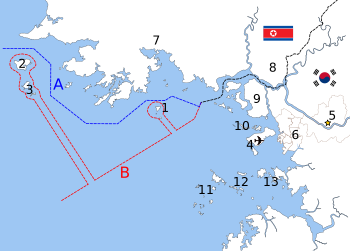 The disputed maritime border between North and South Korea in the Yellow Sea:[6]
A: United Nations Command-created Northern Limit Line, 1953[7]
B: North Korea-declared "Inter-Korean MDL", 1999[8] The locations of specific islands are reflected in the configuration of each maritime boundary, including

Although the Korean Armistice Agreement specifies where the demarcation line and demilitarized zone are located on land, the agreement does not mention lines or zones in adjacent ocean waters.[9] Shortly after the signing of the Armistice, a line in the sea was drawn unilaterally by the United Nations Command (UNC).[10] This Northern Limit Line or North Limit Line (NLL) represented the northern limit of the area in which South Korea permits its vessels to navigate, not a demarcation line on which the two Koreas agreed.[11] The Korean Armistice Agreement (KAA) provisions regarding the MDL and DMZ do not extend into the Yellow Sea or Sea of Japan.[12]

Nonetheless, the UNC-drawn line functions as a de facto or "practical" extension of the 1953 MDL, despite occasional incursions and clashes.[15]