The Military Health System is the enterprise within the United States Department of Defense that provides health care to active duty and retired U.S. Military personnel and their dependents.[1] Its mission is to provide health support for the full range of military operations and sustain the health of all who are entrusted to MHS care.[2]

Its primary mission is to maintain the health of military personnel, so they can carry out their military missions; and to deliver health care during wartime. Often described as the medical readiness mission, this effort involves medical testing and screening of recruits, emergency medical treatment of troops involved in hostilities, and the maintenance of physical standards of those in the armed services.

The MHS also provides, where space is available, health care to dependents of active duty service members, to retirees and their dependents, and to some former spouses. Such care has been made available since 1966, (with certain limitations and co-payments), through the Civilian Health and Medical Program of the Uniformed Services (CHAMPUS) and its successor, TRICARE. In October 2001, TRICARE benefits were extended to retirees and their dependents aged 65 and over.[1]

The MHS has a $50 billion budget and serves about 10.26 million beneficiaries,[3]\ including active duty personnel and their families and retirees and their families.[4] The actual cost of having a government-run health care system for the military is higher because the wages and benefits paid for military personnel who work for the MHS and the retirees who formerly worked for it, is not included in the budget. MHS employs more than 137,000 in 65 hospitals, 412 clinics, and 414 dental clinics at facilities across the nation and around the world, as well as in contingency and combat-theater operations worldwide. 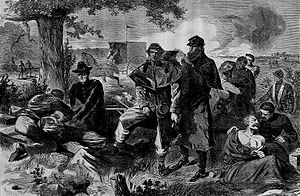 The Surgeon at Work at the Rear During an Engagement, 1862

Before the Civil War, medical care in the military was provided largely by the regimental surgeon and surgeons' mates. While attempts were made to establish a centralized medical system, care provision was largely local and limited. Treatment for disease and injury was, by modern standards, primitive.[citation needed]

In World War I, the U.S. Army Medical Department expanded and developed its organization and structure. Care began on the battlefield and was then transferred to successively better levels of medical capability. Much of this capability was located in the combat theater so that soldiers could be easily returned to duty if possible.[citation needed]

Expansion continued during World War II, but without the benefit of an organizational plan.[citation needed]

After World War II, the Executive Branch of the U.S. Government was reorganized. The Department of War and Department of the Navy were merged into a single Department of Defense. This caused friction between the Army and Navy medical corps. Furthermore, the Air Force, originally part of the Army, was created as a separate military service with its own separate Medical Service.[citation needed]

Changes in the perception of health care after World War II and an assessment of medical services provided to dependents caused Congress to re-evaluate the dependent health care benefit in the late 1950s. Changes in tax law had induced business and industry to begin offering a health care benefit as an employment incentive. A 1956 Department of Defense estimate was that 40 percent of active duty dependents did not have access to federal facilities due to distance, incomplete medical coverage at the federal facility, or due to the saturation of services at military treatment facilities. Congress responded by passing the Dependents Medical Care Act of 1956 and the Military Medical Benefits Amendments of 1966. These acts created the program known as the Civilian Health and Medical Program of the Uniformed Services (CHAMPUS).[5]

In the late 1980s, because of escalating costs, claims paperwork demands and general beneficiary dissatisfaction, DOD launched a series of demonstration projects. Under a program known as the CHAMPUS Reform Initiative (CRI), a contractor provided both health care and administrative-related services, including claims processing. The CRI project was one of the first to introduce managed care features to the CHAMPUS program. Beneficiaries under CRI were offered three choices: a health maintenance organization-like option called CHAMPUS Prime that required enrollment and offered better benefits and low-cost shares, a preferred provider organization-like option called CHAMPUS Extra that required use of network providers in exchange for lower cost shares, and the standard CHAMPUS option that continued the freedom of choice in selecting providers and higher cost shares and deductibles.[citation needed]

In late 1993, driven by requirements in the DOD Appropriation Act for Fiscal Year 1994, DOD announced plans to implement by May 1997 a nationwide managed care program for the MHS. Under this program, known as TRICARE, the United States would be divided into 12 health care regions. An administrative organization, the lead agent, was designated for each region and coordinated the health care needs of all military treatment facilities in the region. Under TRICARE, seven managed care support contracts were awarded covering DOD’s 12 health care regions.[6]

TRICARE has been restructured several times, with contract regions having been redrawn, Base Realignment and Closure, and by adding "TRICARE for Life" benefits in 2001 for those who are Medicare-eligible, and "TRICARE Reserve Select" in 2005.[citation needed]

In 2015, the unethical teaching techniques of military doctor Henry Hagmann at Uniformed Services University became known He had been "injecting students with hypnotic drugs, inducing shock by withdrawing their blood, and performing rectal exams in class". He was suspended and the Virginia Board of Medicine revoked his medical license.[7]

As of 2010, about 1.3 million of the 12.5 million nonelderly veterans in the United States did not have health insurance coverage or access to Veterans Affairs (VA) health care, according to a 2012 report by the Urban Institute and the Robert Wood Johnson Foundation that used 2010 data from the Census Bureau and the 2009 and 2010 National Health Interview Surveys (NHIS). The report also found that:

The U.S. Patient Protection and Affordable Care Act, enacted in 2010, has provisions intended to make it easier for uninsured veterans to obtain coverage. Under the act, veterans with incomes at or below 138% of the Federal Poverty Line ($30,429 for a family of four in 2010) would qualify for coverage as of January 2014; this group constitutes nearly 50% of veterans who are currently uninsured. Another 40.1% of veterans and 49% of their families have incomes that qualify for new subsidies through health insurance exchanges with the PPACA.[8][9]

Additionally, most Tricare plans are currently exempt from conforming to the new healthcare laws under the PPACA. Several bills have been proposed since the PPACA was enacted in 2010, including the most recent S. 358, "Access to Contraception for Women Servicemembers and Dependents Act of 2015"[10] sponsored by Senior Senator from New Hampshire Jeanne Shaheen. Under most current Tricare plans (with the exception of Prime), the health benefit is not considered "insurance", and does not cover women's contraceptives at 100% with no cost-sharing, deductibles, or co-payments.[11] Female military servicemembers and female dependents of servicemembers continue to pay out of pocket for contraceptive services they receive at civilian doctor's offices under plans such as Tricare Standard, where the services are not rendered at a Military Treatment Facility by DoD doctors or contractors. However, The Military Health System, The Defense Health Agency, and Tricare[12] all advertise that they meet the "minimum essential coverage" standard for all military servicemembers. Additionally, the Defense Finance and Accounting Services reports for servicemembers to the Internal Revenue Service each year that every Tricare-eligible servicemember has a health benefit that meets the requirements of "minimum essential coverage",[13] even though Tricare coverage does not meet the standards of minimum essential coverage.

Led by the Office of the Assistant Secretary of Defense for Health Affairs, the Military Health System includes several core organizational areas including: