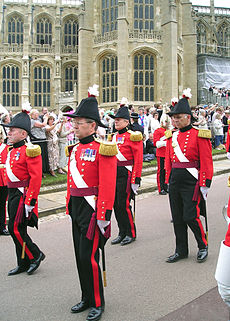 The Military Knights of Windsor, originally the Alms Knights and informally the Poor Knights, are retired military officers who receive a pension and accommodation at Windsor Castle, and who provide support for the Order of the Garter and for the services of St. George's Chapel, Windsor Castle. They are commanded by a senior retired officer as Governor of the Military Knights of Windsor.

The Alms Knights of St. George's Chapel were constituted by King Edward III following the Battle of Crécy (1346), when many knights captured by the French were forced to liquidate their estates to raise ransom money in order to secure their release. At the original establishment of the Order of the Garter and its chapel at Windsor (1348), veteran warriors were called to "serve God continually in prayer". In the statutes of the College of St. George's, a community of twenty-six bedesmen, called Alms Knights or Poor Knights, were appointed. Their duties included attending four services per day and praying for the sovereign and the knights of the Order of the Garter. and rooms.[1]

The Alms Knights were a chantry, a religious foundation organized to pray for its patron. Poor Knights were originally impoverished military veterans. They were required to pray daily for the Sovereign and Knights Companions of the Order of the Garter; in return, they received 12p per day and 40s per year, and were lodged in Windsor Castle. Poverty was an important attribute of bedesmen, and indeed if any Poor Knight were to acquire assets with annual income of £20 or more, he would be removed from the college.[1]

King Henry VIII halved their number to thirteen, Elizabeth I re-founded the order in 1559.[2] At his restoration, King Charles II increased the number to eighteen. King William IV renamed them the Military Knights of Windsor in 1833.[3]

Today, the Military Knights, who are no longer necessarily poor, but are still military pensioners, participate in the Order's processions, escorting the Knights and Ladies of the Garter, and in the daily services in St. George's Chapel. They are not members of the Order itself, nor are they automatically a knight of any chivalric order.

Media related to Military Knights of Windsor at Wikimedia Commons