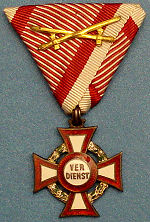 The Military Merit Cross (German: Militärverdienstkreuz, Hungarian: Katonai Érdemkereszt, Croatian: Vojni križ za zasluge)[1] was a decoration of the Empire of Austria and, after the establishment of the Dual Monarchy in 1867, the Empire of Austria-Hungary. It was first established on October 22, 1849 and underwent several revisions to its design and award criteria over the years of its existence. It became obsolete in 1918 with the fall of the Austro-Hungarian Empire.

The Military Merit Cross was established on October 22, 1849 by Emperor Franz Joseph I, based on the recommendation of Field Marshal Count Radetzky. It was to be awarded to officers who had performed especially praiseworthy service before the enemy in wartime, or outstanding service in peacetime, and was originally established in only one class.

The first awards were made to all officers who had served under Count Radetzky in the Italian campaigns of 1848-49, especially the Battle of Custoza in 1848 and the Battle of Novara in 1849. Just under 1,500 awards were made in 1849 and 1850, mainly to these officers. After this, the Military Merit Cross was awarded sparingly except during the Austro-Sardinian War of 1859, the German-Danish War of 1864, the Austro-Prussian War of 1866, the Russo-Turkish War of 1877–1878 (when Austria occupied Bosnia-Herzegovina), and the Boxer Rebellion.

The first major revision of the Military Merit Cross came on January 12, 1860, when the War Decoration (Kriegsdekoration) was created. This was a green laurel wreath (Lorbeerkranz) between the arms of the cross, which was awarded for special deeds before the enemy ("für besondere Taten vor dem Feind"). Henceforth (and retroactively), wartime awards would be distinguished from peacetime awards by the presence of the wreath.

Another change occurred on December 13, 1916, when swords were authorized for awards for bravery. These were crossed swords on the ribbon for the 3rd Class, and between the arms of the cross for the 1st and 2nd Class. On August 1, 1917, second and third awards of the 3rd Class were authorized, signified by one or two 6-mm wide silver clasps on the ribbon. On February 8, 1918, a second award of the 2nd Class was also authorized.

Until World War I, awards to non-Austro-Hungarian officers were uncommon. A number of Saxon officers received the Military Merit Cross in the Austro-Prussian War. Two Bavarians and one Saxon were decorated for their service in the Boxer Rebellion. During World War I, awards to officers of Austria-Hungary's allies became far more common, especially to Germans serving alongside Austro-Hungarians or serving in regiments of which the Emperor was the honorary chief.

From the earliest days of the decoration, the Austrian Emperor also reserved the right to make awards of the Military Merit Cross with Diamonds. This was not a special class, but a token of esteem. Most recipients were senior Austro-Hungarian generals and admirals, although a number were awarded during World War I to high-ranking allies.

The 3rd Class is suspended from a trifold ribbon. The ribbon is that of the Austrian Bravery Medal, a "laddered" pattern of red stripes with white between the "rungs" and a white border (this ribbon was also used for wartime awards of a number of other Austro-Hungarian decorations). The cross is approximately 30-mm in width, with the arms broadening to a width of 15-mm. The center medallion is approximately 13-mm in diameter. The War Decoration wreath, which during World War I was more likely gilt rather than green, is 3-mm wide.

The 2nd Class is suspended from a neck ribbon of the same design as for the 3rd Class. The cross is approximately 40-mm wide, with the center medallion having a diameter of 19-mm. The War Decoration wreath is 6-mm wide.

The 1st Class is a pinback cross worn on the lower left breast. It is approximately 61-mm in width, with the arms broadening to 27-mm at the ends. The center medallion is also 27-mm in width. The War Decoration wreath is 7-mm wide.