From Infogalactic: the planetary knowledge core
Jump to: navigation, search
For the civilian hobby, see Wargaming. 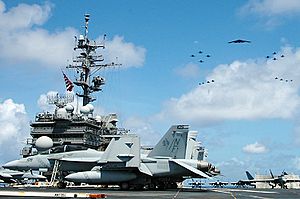 A military exercise or war game is the employment of military resources in training for military operations, either exploring the effects of warfare or testing strategies without actual combat. This also serves the purpose of ensuring the combat readiness of garrisoned or deployable forces prior to deployment from home base / home station.

Exercises in the 20th and 21st centuries have often been identified by a unique codename in the same manner as military contingency operations and combat operations. 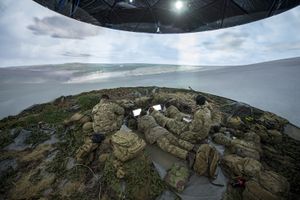 Soldiers from Britain's Royal Artillery train in a "virtual world", 2015

Field exercise
The more typically thought of exercise is the field exercise, or the full-scale rehearsal of military maneuvers as practice for warfare. Historical names for field exercises in the military services of the British Commonwealth include "schemes," while those of the military services United States are known as Field Training Exercises (FTX), or, in the case of naval forces, Fleet Exercises (FLEETEX). In a field exercise or fleet exercise, the two sides in the simulated battle are typically called "red" and "blue", to avoid naming a particular adversary.[1] In U.S. and NATO exercises, this naming convention dates from the Cold War construct where the principal geo-political adversaries of the U.S. and NATO of the period, specifically the Soviet Union, the People's Republic of China and their various proxy states were viewed as "red" forces based on their national flags and the association of communism with the color red, whereas friendly forces were depicted by the color blue.

Command Post Exercise
A Command Post Exercise (CPX) typically focuses on the battle readiness of staffs such as a particular Unified Combatant Command or one of its components at any level. It may run in parallel with an FTX or its equivalent, or as a stand-alone event for headquarters staff only with heavy emphasis on simulated events.

Other types of exercise include the TEWT (Tactical Exercise Without Troops), also known as a sand table, map or cloth model exercise. This type of exercise (in recent years assisted by computer simulation) allows commanders to manipulate models through possible scenarios in military planning. This is also called warfare simulation, or in some instances a virtual battlefield and in the past has been described as "wargames." Such examples of modern military wargames include DARWARS, a serious game developed since 2003 by the US DARPA agency with BBN Technologies, a defense contractor which was involved in the development of packet switching, used for ARPANET, and which developed the first computer modem in 1963.

A subset of simulated exercises is the Table Top Exercise (TTX), typically limited to senior personnel stepping through the decision-making processes they would employ in a crisis, a contingency, or general warfare. 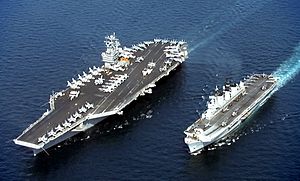 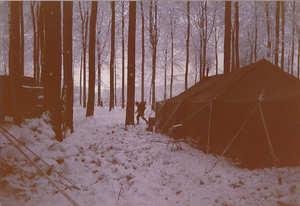 The modern use of military exercises grew out of the military need to study warfare and to 'reenact' old battles for learning purposes. During the age of Kabinettskriege (Cabinet wars), Frederick the Great, King of Prussia from 1740 to 1786, "put together his armies as a well-oiled clockwork mechanism whose components were robot-like warriors. No individual initiative was allowed to Frederick's soldiers; their only role was to cooperate in the creation of walls of projectiles through synchronized firepower." [2]

This was in the pursuit of a more effective army, and such practices made it easier to look at war from a top-down perspective. Disciplined troops should respond predictably, allowing study to be confined to maneuvers and command. 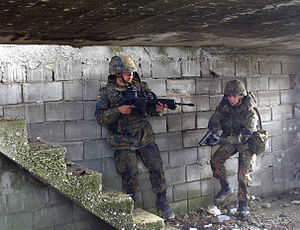 The stunning Prussian victory over the Second French Empire in the Franco-Prussian War (1870–71) is sometimes partly credited to the training of Prussian officers with the game Kriegspiel, which was invented around 1811 and gained popularity with many officers in the Prussian army. These first wargames were played with dice which represented "friction", or the intrusion of less than ideal circumstances during a real war (including morale, meteorology, the fog of war, etc.).

21st century militaries still use wargames to simulate future wars and model their reaction. According to Manuel de Landa, after World War II the Command, Control and Communications (C3) was transferred from the military staff to the RAND Corporation, the first think tank.

Von Neumann was employed by the RAND Corporation, and his game theory was used in wargames to model nuclear dissuasion during the Cold War. Thus, the US nuclear strategy was defined using wargames, SAM representing the US and IVAN the Soviet Union.

Early game theory included only zero-sum games, which means that when one player won, the other automatically lost. The Prisoner's dilemma, which models the situation of two prisoners in which each one is given the choice to betray or not the other, gave three alternatives to the game:

While the first is their best overall choice, neither of them can be sure that the other wouldn't betray him (and thus be freed while he would get a long sentence). Thus, betrayal was considered as the most rational thing to do, i.e. minimaxing the losses (getting the possible loss to be the minimal possible).

Military wargaming was thus progressively improved, although according to Manuel de Landa it still suffers today from a systemic bias on conflict against cooperative behavior. Dice, which were a rational way to represent chaos, were replaced by the Prussians by artillery range tables, and then by evaluation of each weapon's lethality, etc.